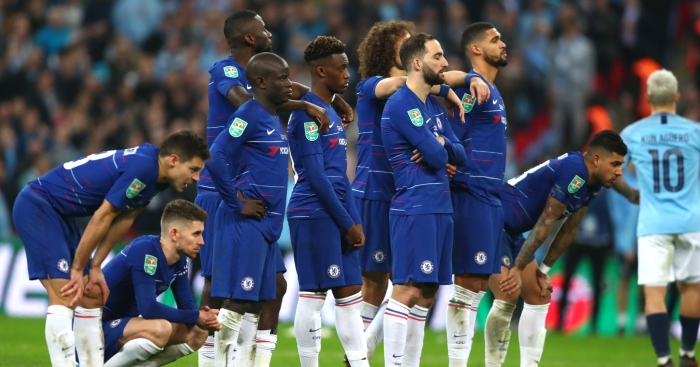 Description of the day
Dave Kidd in The Sun on Maurizio Sarri: ‘An eccentric, almost pitiful figure, obsessed with chalkboards and Marlboro Lights.’

What you’ve described there is just a coach who smokes, fella.

Quite remarkable
The word ‘remarkable’ is defined as ‘worthy of attention’ and ‘striking’, so Mediawatch has to question the use of it by the Daily Mirror’s John Cross to describe the ‘show of support for under-pressure manager Maurizio Sarri’ delivered by David Luiz.

‘Remarkable’ would have been Luiz not supporting his manager, John. You might have all decided that Sarri is an intellectual oddity with no future in the English game, but the majority of his players actually seem to like and respect the man. Bizarre, right?

The ultimate Stan
‘Arrizabalaga should never be allowed to play for Chelsea again, regardless of the fact they lavished £70million-plus on him only last August.

‘He should be made to play in the reserves for the rest of the season and told, ‘Right, **** you, off you pop’, by the club and boss when the transfer window reopens.’

Stan Collymore in the Daily Mirror there, completely disregarding the concept of a contract. And common sense. And business sense. And forgiveness. And perspective.

Apart from all that, it’s a flawless plan.

The importance of being earnest
The newspapers all have their own versions of what transpired in the aftermath of Kepa v Sarri on Sunday, and Mediawatch had to laugh at Sami Mokbel in the Daily Mail, who seems to be labouring under the illusion that absolutely nobody else has spotted that it probably wasn’t a ‘misunderstanding’.

‘The Chelsea manager’s reaction simply does not stack up with the later assertion from Sarri – and a number of players – that the furore was all a big misunderstanding.

‘So it poses the question: what machinations were at play to ensure everyone sang from the same hymn sheet during the post-match media briefings.’

Machinations? It takes roughly four seconds to say ‘right, we all call this a misunderstanding and deal with it all in-house’. It’s not frigging Watergate.

That boy’s not right
Sami Mokbel’s colleague – and Daily Mail Chief Sports Writer – Martin Samuel has of course treated this whole matter with restraint and the amusement it clearly deserves.

Wait a minute, has he f***. Everybody has lost their bloody minds.

‘The pity of it was that, before Kepa Arrizabalaga and his teammates decided the opinion of Chelsea’s manager did not matter one iota, Maurizio Sarri was having a very good afternoon at Wembley.’

‘And his teammates’? We’re pretty sure only one man refused to come off.

‘The big myth about Chelsea’s display on Sunday was that the players were giving their all for Sarri. It was trotted out a few times during broadcasts, but the insubordination told the real story.’

Ah, so we’re sticking with this trope that all the players were guilty of ‘insubordination’? Even though there was only one man involved in an argument with the bench?

‘When Sarri needed them – when they should have intervened on his behalf, he was deserted.’

Right. So ‘insubordination’ actually means that they didn’t forcibly remove their teammate? David Luiz tried talking to him, but apparently that was nowhere near enough.

‘Senior players like Hazard were of no help re-establishing the manager’s authority.’

Yes. How dare Eden Hazard not stride the whole length of the pitch to remonstrate with his goalkeeper? The dick.

Hazard warning
Talk of Eden Hazard takes us to The Times and Tony Cascarino. And, well, oh wow…

‘Eden Hazard is by no means captain material but he should be one of the senior players leading by example. Instead he was taking the mickey with his Panenka penalty in the shoot-out against Manchester City. It was bordering on ridiculous. There should have been someone in the dressing room after that saying, “What the f*** are you doing?”

So, wait a minute, just after that showdown between Kepa and manager Maurizio Sarri, the Chelsea players should have come into the dressing-room and turned on their actual best player, who had just scored in the shoot-out? Because true leadership can obviously only be shown by hitting the ball really bloody hard from the penalty spot.

‘Would he do that in a World Cup final? No chance. He was not taking it seriously and it was completely unprofessional. It summed up what is wrong at Chelsea. Players such as Hazard and Arrizabalaga are pushing boundaries because they know they can get away with it — and Maurizio Sarri’s uncertain future as head coach adds to their complacency.’

He might do it in a World Cup final. He has certainly taken Panenka penalties before. And he has not missed a penalty in almost two years, he probably knows a thing or two about penalties. Probably more than Tony Cascarino.

‘It is no surprise that the club are lacking leadership when their club captain, Gary Cahill, has been discarded by Sarri. It was the case in my career — and something that I think still stands — that it really helps for your captain to be born in the same country and have a strong connection to the club. Cahill is the only player who really ticks those boxes. He has been there since 2012, won two league titles, a Champions League, a Europa League and an FA Cup but this season he has started six games and played 21 minutes of league football.’

Anybody want to tell him that the club who have won three of the last seven Premier League titles is captained by a Belgian?

Escape room
‘Kepa will escape any punishment from the club hierarchy who view the matter as closed’ – The Sun.

‘It is understood that the keeper will not face internal disciplinary action’ – The Daily Mirror.

Something was obviously lost in translation because Mediawatch ‘understands’ – because Chelsea said so – that Kepa was fined.

King of wishful thinking
‘CHELSEA are ready to turn to Zinedine Zidane to make them a European superpower again,’ claimed Sun man Dean Scoggins in an exclusive on February 13. Five days later, Scoggins was back again, exclusively claiming that ‘ZINEDINE ZIDANE wants the Chelsea job – if they match his terms and ambition’. It sounded like love (and absolutely not like a journalist doing somebody’s agent a favour).

Which brings us to February 26 and Scoggins’ colleague Dave Kidd, who writes that ‘Chelsea’s keen interest in Zinedine Zidane still seems like wishful thinking on their part’.

Mediawatch is confused; surely all Chelsea have to do is ‘match his terms and ambition’?

Wyatt eurggh
We have to reluctantly admire Kidd for railing against some of the nonsense espoused by his colleagues. After this hokum on Monday from Charlie Wyett…

‘Liverpool fans chanted about being top of the league but, deep down, they know their team is choking.

‘It is almost as if they are now giving Spurs a real fight to land the crown as the great bottle jobs of English football.

‘Jurgen Klopp’s team look to be haunted by the ghosts of 2014, Liverpool’s previous title cock-up.’

…came this from Kidd on Tuesday:

‘It doesn’t feel as though Klopp’s men are choking, bottling it or getting weighed down by 29 years of hurt.’

‘Brighton are one of those on a glass mountain with a pair of moccasin slippers on. They’re sliding quick’ – February 26 2019.

‘[Watford] were the team on the glass mountain with moccasin slippers on’ – February 9 2018.

‘I know [Watford] have been on the glass mountain in moccasin slippers lately but I think Silva has been very hard done by. I feel for him’ – January 27 2018.

‘Watford are on a glass mountain with moccasin slippers’ – January 12 2018.

‘It’s so important [Watford] beat Leicester, because I think they could have ended up as one of those teams on a glass mountain with moccasin slippers on’ – January 1 2018

‘Burnley need to win, they’re on the old glass mountain with moccasin slippers on’ – April 4 2017.

‘There’s always a team that slides down the league like they’re on a glass mountain with moccasin slippers on and can’t stop. [Leicester] are the ones for me’ – February 21 2017.

‘There’s always one team who end up on the glass mountain with moccasin slippers on, and it could be Swansea’ – February 27 2016.

‘Swansea are on a glass mountain with slippers on and they can’t stop sliding’ – January 14 2016.

‘There’s always one team who end up on a glass mountain with a pair of slippers on and this year it’s Newcastle’ – May 8 2015.

‘Near the end of the season you always get one team that comes flying down the league on a glass mountain with a pair of slippers on and Newcastle are that team at the moment’ – April 23 2015.

The PFM quote of the year
“He obviously listens to his physios, his medical people and Tom, Dick and Harry from abroad” – Neil Warnock is your dad.

Recommended reading of the day
David Squires on Kepa