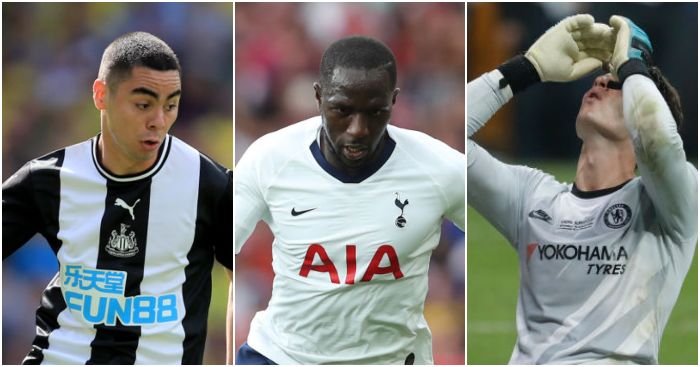 We have already presented the findings of our experiment to discover the ‘perfect’ Premier League team so far this season. It contained as many Liverpool players as Burnley. So now we have set out to do the opposite and bring you the absolute ‘worst’ XI after four games.

As before, players must have started at least three of four matches to be considered. And this is not entirely serious, as if that actually needs pointing out.

The most expensive goalkeeper in history is also, at least in Premier League terms, currently its least effective. Only two shot-stoppers have stopped less than half of the shots they have faced thus far, with Mat Ryan (47.1%) keeping Kepa (46.7%) company. Tom Heaton (58.8%) is third, but he and Brighton’s keeper cost about one-tenth of Chelsea’s.

Kepa rarely makes high profile errors but I’d like to see him making more world class saves. Rarely costs us games but his shot stopping rarely wins them for us

Gary Neville’s claim that the Spaniard ‘would make every defence a nervous wreck’ looks pretty prophetic: Kepa has registered two clean sheets in his last 15 games. Willy Caballero has managed not to soil himself more recently for Chelsea.

With plenty of leeway afforded to Davinson Sanchez due to his not being an actual right-back, Emil Krafth takes this spot for his apparent non-existence at Newcastle. The summer signing started in the defeat to Norwich, the victory over Tottenham and the draw with Watford, being dribbled past as often as he has made a tackle (three times), and failing to create a single chance.

Kiko Femenia and Ryan Fredericks provide particularly stern competition but both at least have one key pass and a much better tackle success rate. Their previous Premier League experience might have made the difference; Krafth is making Emil of it really. That is a little harsh, of course; he is improving with each game. But Javier Manquillo created more chances against Arsenal than his Swedish teammate has managed all season.

The nervous, uncomfortable scuff into the path of Roberto Firmino, and subsequent second Liverpool goal as a direct result of his mistake, would have come as no real surprise to those who know Ben Mee’s strengths and weaknesses. Deliver a cross into the box and it will be headed to safety. Ask him to pass the ball first-time more than five yards under intense pressure from one of the most daunting attacks in world football and expect to be racing back into position. Mee has completed 86 of his 138 attempted passes to give him a success rate of 62.3%, beating only the likes of Divock Origi (62.1%), Dominic Calvert-Lewin (60.4%) and Christian Benteke (52.3%). Burnley account for ten of the 17 lowest pass accuracies of all outfield Premier League players so far. Turf Moor is not the place for tiki-taka.

Michael Keane has lost the most aerial battles of any Premier League centre-half (21), but has at least emerged victorious on 23 occasions. Craig Cathcart, Jonny Evans, Tyrone Mings and Yerry Mina are tied in second with ten defeats in the air; again, each have won more than they have lost. Calum Chambers is wasting his 6ft frame with three aerial Ls to his zero aerial Ws. But Martin Kelly is the first centre-half to lose more (9) than he has won (8). Perhaps Frank de Boer was right all along. Or maybe Crystal Palace have the best defensive record and Kelly has missed just 11 minutes of their fantastic start, thus proving statistics to be utter poppycock.

Will the 29-year-old and Gary Cahill – who has inexplicably also lost more aerial battles than he has won so far this season – retain their places upon the returns of Mamadou Sakho and James Tomkins? Roy Hodgson has earned the chance to make such a difficult call. Maybe they should stop those crosses coming in though. They’re just asking for it now.

Best defensive record in the league with a back 4 of

Roy really is one of the most underrated managers about.

A broken Jonny provides neither protection nor fun, and Wolves must be wondering whether their left wing-back’s current travails are the main source of their recent problems. Only three teammates created more chances for Nuno’s side in the Premier League last season, while eight are bettering his solitary key pass this campaign. And the 25-year-old formed a key part of the joint-best defence outside the top four in 2018/19, yet has been dribbled past as often as he has tackled an opponent (five times) in 2019/20. In his default position as a left-sided midfielder, neither statistic is particularly positive. With two successful dribbles in three games, it is downright terrible.

It feels like a mistake but it does rather explain a lot of things, namely his England disappearance and Southampton’s relative struggles. Ward-Prowse appears to have spent so long honing his set-piece craft to the point of perfection that the basic skill of finding and making a pass while the ball is in play is no longer simple. The midfielder has not missed a minute but is attempting just 35.5 passes on average per game, with his 66.2% completion rate the most stark figure.

With regards to the latter statistic, Ward-Prowse’s closest competitor hails from Burnley in the form of Ashley Westwood (69.7%). The final podium position goes to Will Hughes (70.5%). That each of those players are at clubs in the bottom half is probably just a happy coincidence.

But who will fail to win the ball back for Ward-Prowse to do nothing with it? That task falls to Moussa Sissoko and his 0.7 tackles and 0.3 interceptions every 90 minutes. Youri Tielemans and the more attacking Manuel Lanzini are the only central midfielders who rank lower for tackles; he is level with Granit Xhaka, Paul Pogba, Jack Grealish and teammate Harry Winks for those non-existent interceptions. Such nonchalance towards regaining possession is considered sacrilegious by N’Golo Kante – although Sissoko has done awfully well to make it even this far.

Hell, just wait until he starts playing at right-back and shackling Serge Gnabry, Ivan Perisic and Philippe Coutinho at the Allianz Arena. If only Giovani Lo Celso wasn’t made of the north London scrapheap parts of Jack Wilshere.

David will not be pleased. Despite starting all four of Aston Villa’s games so far – and finishing none of them – Trezeguet has created just two chances. The extensive list of teammates with at least as many key passes includes Ahmed Elmohamady, Conor Hourihane and Tyrone Mings. Wilfried Zaha has been surprisingly and equally unhelpful going forward, laying on just two chances at Crystal Palace, but his four appearances include one as a substitute. And he wasn’t stupidly sent off in a 1-0 defeat early in his first underwhelming Premier League campaign.

With a 20% success rate from five dribbles, few attacking midfielders with three Premier League starts have been as clumsy as Roberto Pereyra. Christian Eriksen failed his only dribble attempt, Ryan Fraser is currently down 1-3 and Daniel James’s solitary successful dribble is the exception to a rule set by seven unsuccessful ones. But each are at least providing a goal threat when they don’t trip over their shoelaces, whereas Pereyra has been blunt. His only shot on target this season forced a fairly routine save out of Martin Dubravka in Watford’s last game. Had it gone in, it might have saved Javi Gracia’s job. As it is, the Argentinean can count himself as one of those culpable for his sacking.

That club-record deal, those promising first few games and that £50m link to Real Madrid all feel like a lifetime ago. It is fairly common knowledge that Almiron’s wait for a first Premier League goal or assist is in danger of lasting an entire calendar year, but more worrying is the fact that he is not even getting particularly close to ending it. The 25-year-old has played every minute, created two chances and failed to have a single shot on target. A random selection of players who did not cost £20m but have tested the keeper this season: Maya Yoshida, Jack O’Connell, Dale Stephens, Ben Mee and Paul Dummett.

The award for most shots without scoring so far this season goes to James Maddison (13). As for strikers, Gerard Deulofeu leads the way in profligacy with eight shots, two on target, and no goals since his consolation in a 4-1 defeat to West Ham on the final day of last campaign. Again, convert one of those and Javi Gracia might not be the world’s nicest unemployed man right now. We hope you’re happy, Gerard.