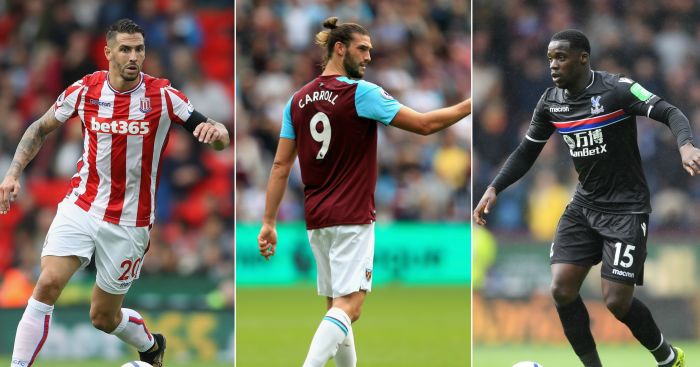 We’ve already brought you our experiment to discover the ‘perfect’ Premier League team this season. It contained Granit Xhaka. So now we’ve gone for the opposite as we set out to pick the ‘worst’ Premier League XI.

To create a ‘perfect’ team you must have three balanced centre-halves, a passing midfielder partnered with a tackler, two crossing and dribbling wing-backs, two creative attacking midfielders and a striker capable of finishing any chance.

You won’t find a player like that amongst this lot. From a goalkeeper with holes in his gloves to wing-backs that struggle to put a cross in; these lot haven’t cut the mustard this season.

Obviously you can interpret statistics however you like – and you probably won’t agree with us – but we’ve given it a go anyway.

Before we start, players must have made at least five appearances this season for inclusion. Shall we begin?

After a year away with Torino, Hart has really not settled back into the English top flight. The England international has saved 54.05% of shots faced, which is the worst in the Premier League. Worryingly, this sees him only marginally losing out to Jack Butland (54.55%), who some think should replace Hart for England.

Hart has conceded 17 goals in his nine league matches since joining West Ham on loan from leaders Manchester City. It can be difficult for goalkeepers in struggling teams but the 30-year-old has faced fewer shots than seven other goalkeepers, including Heurelho Gomes, Kasper Schmeichel and Lukasz Fabianski.

One of the shining lights in a fairly disappointing season for Swansea last campaign, Alfie Mawson may be showing signs of slowing down his development. In the 2017/18 campaign he has made the least interceptions (0.2 per game) of any defender that has started five matches or more in the Premier League. That figure seems scarily low for a player in a side that sits near the bottom of the table.

Match of the Day pundits highlighted him earlier in the season for his defending in Swansea’s 2-1 loss to Watford in September. Mawson was criticised by Martin Keown for a weak challenge on Richarlison, leaving Keown claiming that Mawson had “to take him out”.

Of 169 passes Cameron has attempted this season, 52 have been unsuccessful, giving him an average passing accuracy of 68.3%. With any misplaced pass potentially proving costly in a defensive situation, his poor accuracy could be costing Stoke, though it is worth noting that Cameron played one of his seven matches for the Potters this season in midfield.

Oh and USA boss Bruce Arena recently left him out of the national side’s starting XI against Panama for their crucial World Cup qualifier as he was not happy with Cameron’s fitness.

The West Brom defender has appeared in all nine of Tony Pulis’ side’s matches in the league this season with only ten goals conceded. However, he averages 5.9 aeriel duels per 90 minutes, losing out in three of those. Although Arsenal’s Laurent Koscielny (3.2) and Bournemouth’s Simon Francis (3.1) have lost more aerial battles, the pair have also won a lot more than Dawson.

Thankfully Dawson has another experienced centre-back alongside him in Jonny Evans, while Pulis is notorious for drilling his teams as a well-oiled defensive unit.

Not only that but when he gets into good positions, his final ball seems to be lacking. The former Manchester United defender has only created 0.1 chances per match so far this season, despite the fact that the Foxes are the eighth highest scoring side in the league.

If you can’t pass, you can’t be a central midfielder – that much is pretty obvious. Of course Kouyate can pass, he just happens to attempt the least of any Premier League central midfielder. His actual passing accuracy is decent at 80% but the fact he rarely makes a pass will not be helping Slaven Bilic in his quest for more goals. It’s no wonder the Hammers boss pushed him up into a centre-forward position against Brighton to get a goal as he certainly did not look like creating one.

It won’t be surprising to anyone to see a couple of Crystal Palace players in this XI. In fact, if this wasn’t based on statistics then a case could be made for a few more to join Cabaye and Jeffrey Schlupp on this list. Only Wilfred Ndidi (2.7) has been dribbled past more times per game than Cabaye (2.2) this campaign. However, it is his shocking tackle statistics that edge the France international into the team – and we aren’t talking about his awful challenge on DeAndre Yedlin over the weekend. Ndidi has been let off by the fact he has completed 4.3 tackles per match in comparison to Cabaye’s woeful figure of 1.7. The stats are all the more surprising as Cabaye is seen as a player who will ‘get stuck in’.

One Palace player is quickly followed by another. The general view is that Jeffrey Schlupp has worked his socks off for Palace this season but unfortunately for him and the club he has lacked an end product. And the stats seem to back up that opinion, with only 0.1 successful crosses made per match – the lowest of any left-back or left wing-back in the Premier League. The Foxes have only scored two goals in the whole campaign to date and although Schlupp could have done more, he is far from their only problem.

Jamie Carragher certainly didn’t mince his words when he described Arnautovic’s performance in West Ham’s 3-0 loss at home to Brighton, saying: “Walking about in the game, it was beyond belief watching him certainly in the first half and I was trying to hold my tongue actually because I felt like someone might say I was bullying him.” The Austrian was booed off by his own fans when he was substituted and Carragher described his “the type of performance that gets a manager sacked”.

Every player can have a bad game, right? Unfortunately for West Ham, signing Arnautovic is beginning to look like a disastrous piece of business. No goals and no assists in six Premier League matches is poor enough for a player with so much ability but it’s his apparent lack of desire that will really hurt the Hammers fans. So good at taking a game to the opposition in his Stoke days, the 28-year-old has the worst dribbling stats of any attacking midfielder in the league with only 0.2 successful dribbles per game.

Jordan Ayew has actually scored a goal and contributed an assist for Swansea this season, unlike a lot of the players on this list, but for someone who has played every minute for the club, it’s a disappointing return. Especially when you consider his goal came against rock-bottom side Crystal Palace, who have let in 19 this term. There are players that have created fewer chances than Ayew in the Premier League but no other attacking midfielder has created less than Ayew’s 0.3 chances per match.

The West Ham striker is yet to hit the back of the net for Slaven Bilic’s side this term despite his best efforts to make opposition defenders’ jobs uncomfortable. Of course, that gives Carroll a 0% conversion rate alongside another four strikers who have played in five matches and not scored. However, the Gateshead-born star has had more shots than any of them with 18 – 11 of which were inside the penalty area.

In mid-September, Bilic pinpointed Carroll as the answer to West Ham’s early-season woes but with no goals and no assists he’s been far from their saviour. The 28-year-old was even sent off against Burnley for two yellow cards just 99 seconds apart. The daft apeth.