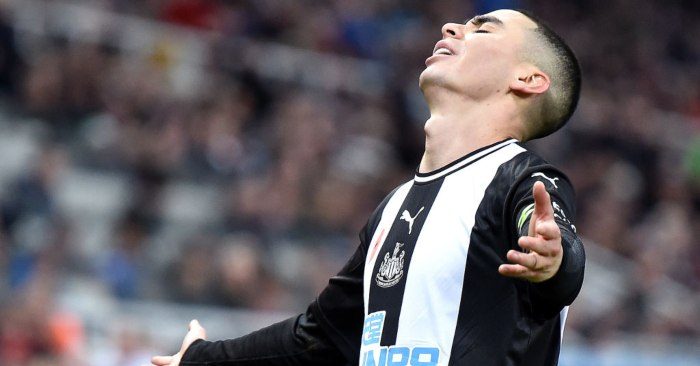 And we’re talking regulars here, so all these players have started over half of their club’s Premier League games (which rules out the woeful Roberto). We have used WhoScored’s ratings as a guide…

GOALKEEPER: Angus Gunn (Southampton)
Could it be anybody else but the player who allowed nine goals (from 15 shots on target) against Leicester? Poor Angus Gunn has not been seen since, with Alex McCarthy taking his place between the Saints sticks. That Foxes farrago contributes to a save percentage of just 54.5%, which is actually better than that of Chelsea’s Kepa, who is embarrassingly keeping out fewer than half the shots on target he has faced this season. Still, he’s never let in nine…

RIGHT-BACK: Yan Valery (Southampton)
Part of the Saints defence that exposed Gunn that night on the south coast was 20-year-old Frenchman Valery, who was hauled off after 70 minutes with the score at 7-0. He was then trusted for 75 minutes against Manchester City but has not been seen since, with Stuart Armstrong and Cedric Soares both preferred to the youngster. In 544 minutes of Premier League football this season – many as a wing-back – he has created two chances and put in two accurate crosses. Ouch.

CENTRE-HALF: Conor Coady (Wolves)
Well this is awkward. The problem with Conor Coady is that the statistics don’t show him actually doing a great deal. He leaves most the the heading, the clearing and the tackling to the man mountain that is Willy Boly (joining Arsenal soon, obviously); he can afford to take the role of the cultured, passing centre-half – aptly for a converted central midfielder – because there are generally three of them. Basically, he is the reason that ‘worst’ is in quote marks in the headline.

CENTRE-HALF: Craig Cathcart (Watford)
It could only be a matter of time before the Premier League’s worst team had a representative on this list, and it’s Craig Cathcart who gets the nod. The 30-year-old Northern Irishman missed the 8-0 thwacking by Manchester City but still rates lower than Craig Dawson because Watford’s summer signing is more dominant in the air and tends to throw himself in the way of goal-bound shots. Which leaves you wondering exactly what Cathcart is doing while the Hornets are falling apart?

Still confused in our 5th season in the premier league we had a defence ending a game of; mariappa, Cathcart, masina and Holebas. 5th year!!! Come on. Simply not good enough. What did the board expect???????? 🤷🏻‍♂️🤷🏻‍♂️ #watfordfc 🐝😡🐝

LEFT-BACK: Jamal Lewis (Norwich City)
The young Northern Irishman may find it tricky to get back into the Norwich side after he missed this weekend’s clash through injury and the Canaries promptly won their first game since mid-September and kept a clean sheet in the process. It helped that Byram made more tackles in 90 minutes at Everton (5) than Lewis in his last three appearances (3). It’s fair to say that the full-back has – along with many of his Norwich teammates – struggled with the transition to Premier League football. No shame in that at 21.

CENTRAL MIDFIELDER: Morgan Schneiderlin (Everton)
Oh my. What a fall from grace for the Frenchman who looked quite the £25m coup when he joined Manchester United in 2015. It now seems remarkable that he became quite the £20m almost-recoup when he joined Everton less than two years later. He has been woeful for Marco Silva, who surely would have had him nowhere near the team if Jean-Philippe Gbamin, Andre Gomes and Fabian Delph could remain fit. He tackles significantly less than attacking players Bernard and Richarlison and creates practically nothing.

THIS is why people hate Schneiderlin. Fucking zero effort. He is shocking- always has been- and he just got rightly yanked pic.twitter.com/HRc2gHGiVf

CENTRAL MIDFIELDER: Moritz Leitner (Norwich City)
The German was excellent during Norwich’s promotion season when the Canaries dominated most games and he had the time and space to operate, but in the Premier League he has looked lightweight and was dropped after 45 poor minutes against Manchester United. He was then confined to the bench for the Brighton defeat before failing to even make the match-day squad for Norwich’s last two games. No goals, no assists, no way back now it seems.

ATTACKING MIDFIELDER: Miguel Almiron (Newcastle United)
“I think the unluckiest player at the club goes to Almiron,” said Darren Bent this week after watching him toil once again as Newcastle drew a blank at Aston Villa. He has not scored a single goal or logged a single assist since joining Newcastle in January, and that is not a strong look for a forward player. Almiron has attempted 22 shots this season but only a paltry five have hit the target. Is that unlucky or just a bit sh*t?

Another hopeless display from Almiron. Plenty of running, I know. But anyone that’s fit can do that. He’s got to start contributing. #nufc

ATTACKING MIDFIELDER: Marco Stiepermann (Norwich City)
A No. 10 with no goals and no assists? It’s little wonder that he is yet to complete 90 minutes this season and it’s little wonder that the German was restricted to the bench as the Canaries finally won at Everton last weekend. Kenny McLean came into that role at Goodison Park and made as many chances in 90 minutes (5) as Stiepermann in his last four Premier League starts.

ATTACKING MIDFIELDER: Harry Wilson (Bournemouth)
A haul of four goals makes Wilson’s Bournemouth loan look like a success but the Welshman has completed 90 minutes only once this season; against Wolves on Saturday he lasted just 45 minutes. He simply does not create enough for this Cherries side and has actually only delivered two accurate crosses in 12 Premier League appearances. “Hopefully there’s a lot more to come,” said Eddie Howe, who would probably quite like David Brooks to return now.

STRIKER: Andre Gray (Watford)
This looks awful harsh because non-scoring strikers simply do not start half their club’s games (unless they are Joelinton, who wins enough balls in the air to impress the algorithms), but Andre Gray earned this position with 56 minutes against Burnley on Saturday in which he had no shots, created no chances, completed just five passes and picked up one yellow card. Ouch. ‘He’s simply not performing this season,’ was the verdict of the local reporter. Indeed.