Home Mailbox These are not ‘fans’; Nazi salutes are not ‘racist gestures’ 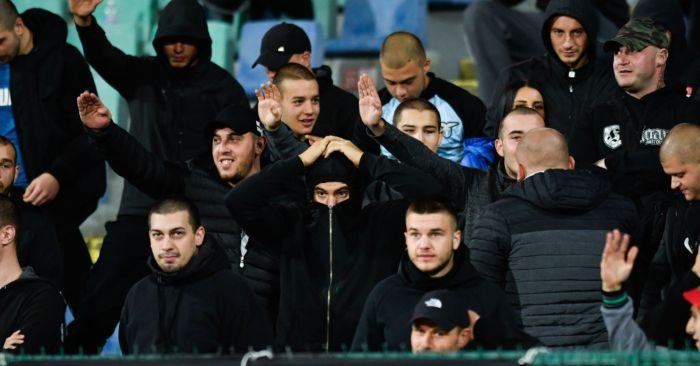 The sh*t hits the ‘fans’
Can we stop calling these racist idiots “fans”, they are not football fans. I remember the first time my dad took me to a game. We put on our shirts, headed to the game, he bought me burger and a programme, took our seat, encouraged our team and stood and clapped at the end of the game. At no point during that did we scream abuse at someone because of the colour of their skin.

Don’t call them fans, they aren’t. They are barely even human.
Robbie DFC Éire.

This is dangerous
I am a little concerned over coverage of the Bulgaria “racist” incident. The BBC referred to Bulgarian fans making racist gestures during the game. What I saw was a group of organised men making Nazi salutes. Calling this a racist gesture is like calling terminal bowel cancer a tummy ache!

This goes far beyond racism in football, it is a worrying trend in  Europe of a rise in fascism.  A couple of years ago at the Arsenal v Cologne match, after the game a section of Cologne fans started making Nazi salutes to the stewards and police, none of which was reported.

This sort of thing needs stamping out by any means necessary. The last time we ignored a rise of fascism in Europe it cost the lives of over 70 million people.
Paul

Angry and uncomfortable
It’s 0430 so please excuse the spelling and grammar, I’m up with the kids. I’ve just got them back to sleep, rolled over and checked my phone to see if football365 have updated their website with an article on last nights game. Not the player ratings I do dearly love. Or the England ladder. But a piece on the abhorrent racism. I’m pleased it’s not been rushed out, and am anticipating your usual insightful, informed, research piece that stands you out from other fan sites as you discuss the wider tapestry of the game.

I am a 30 something, middle class white male. Married to a second generation black English woman, with 2 mixed children. I always get asked my opinion on matters such as “why is black face racist?” And whilst I can articulate with academic response, I’m not black. So always feel uncomfortable being seen by whites friends as any source of knowledge. I fell in love with my wife who happens to be black. Not because of it race was something I didn’t see. Like most people with their friends.

However being confronted by racism makes me very angry. But also uncomfortable. As I can only imagine what it must be like to be Tyrone Mings last night, or how I would never want that for my children. But not directly relate as it’s not me. A comedian(can’t remember which), said being a white male was winning the lottery in life. You could go back in a time machine to any land, anywhere in the world a pretty much be okay. As a black male he couldn’t even go back to the 90’s in America. Most people I want to believe now don’t see colour, or at least in a way that is no different tk hair colour in this country. But I’m uncomfortable because saying it’s abhorrent and wrong is right and easy, but I feel I am sat here with my privileged white anger is easy, and not helpful; and I don’t know how to constructively respond. Racism seems like such a stupid idea now, to me and my peer group in this country, it’s hard to give it’s history context or credence.

This is why I’m lying awake checking my phone to see to see what discussions are to be had beyond the Alan Shearer football news approach, of say what you see “racism is wrong”. Football can never be devoid from politics. Something Sir Stanley Rous learnt the hard way as he was ousted as FIFA President by Jaoa Havelaange. Diplomacy through sport such as the Ping Pong politics between China and America are powerful soft power tools. Football has its part to play as the world’s sporting language. I hope greater minds than mine, can use last night as a forum / tool to begging to bring about change, or action.
JBC

Mings will make you go hmm…
I am not, in any way, saying that Tyrone will be an England centre back for years to come. Despite all his physical attributes he has too many errors in him for that I believe, sadly.

Ever since he has joined Aston Villa though, I have been nothing but impressed by this man’s eloquence, humbleness, intellect, and all round classiness. If more footballers spoke as well as Tyrone does, I’d probably still be more in love with the game than I am. He impresses me more and more each time I see him interviewed post-match. Tonight, of all nights, I really needed to send this out into the ether…
rooouusse ,AVFC

Part of the problem?
ITV had an absolute shocker last night.

First up is Clyde Tyldesley who said when Sterling scored in the first half that scoring a goal was the best response to racism.  Really?

After the match, Ian Wright put it perfectly.  “I’ve played games with racism going on and people say beat them on the pitch.  It doesn’t do anything, you don’t beat them on the pitch, I have scored two goals against teams and they have still given me racist abuse. You don’t win. Today they won because the fans had to leave.”  Spot on.

And then there was the host, Mark Pougatch.  After Wrighty had told us all about how this was a great day in the battle against racism (which it was,  a real turning point), Pougatch closed the show with a comment about how this had been a really depressing evening.

Tyldesley’s and Pougatch’s attitude to racism is really quite blasé.  One thinks players should ignore it and get on with playing football.  The other thinks that it’s depressing when a long overdue stand against racism gets in the way of football.  They’re both part of the problem.

I hope F365 are brave enough to publish this.
Steve Mills

Hypocrisy
Have any set of fans ever been more lacking in self awareness?? Yes,the Bulgarian fans anctics were a disgrace but England fans singing “you racist b####rds,you know what you are” was absurd.

No England game goes by without “No surrender to the IRA” “10 German Bombers” and many other racist ditties bellowing out from a sizeable crowd of England fans in the stand.Where is the outrage when this occurs? Should UEFA throw the English out as well?

I’m sure Sterling can’t wait to come home and play at Stamford Bridge where he was racially abused just last season & wasn’t he racially abused and kicked at his own training ground by a fan??

Not to mention the abuse he has gotten off the media which he himself has tweeted about.Also,lets not forget we are weeks away from November which,as we all know is the annual lets call James McClean a Fenian b###ard for a month and get away with it time of year.All because he won’t wear a poppy which is his choice..which is what the people who fought in the war fought for.

It was a shameful night in Sofia but for the English to get outraged and take the moral high ground is nauseating to many who have witnessed their fans racist and boorish behaviour for years.

Ask any set of fans who are the most boorish and xenophobic set of fans in world football I can guarantee you the English would top the list in every country.
Gussy,Ireland.

This is in no way an attempt to troll anyone or to water down the sickening behaviour of those so called fans who racially abused English players last night but I hope James McClean gets as much support next month from the footballing community.

I won’t hold my breath though
Macker, Dublin

Calm down, part the second
See, I told you so. Now stop acting like twats when we suffer one bad result (it happens, get over it) and start supporting this wonderfully talented but raw team.

I’m 35 and this is hands down the best football we have played since Euro 96.
Theo

It’s sheep we’re up against
Hi there,

Likely, and correctly, to get overlooked in the controversy following the England team’s racist abuse at the hands of Bulgarian fans last night, but I liked the Housemartins reference in yesterday’s Mediawatch, even if nobody else did.
Dara O’Reilly, London