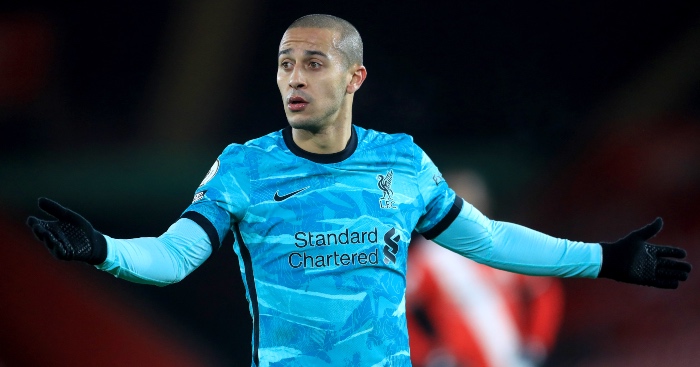 Keep the mails coming to theeditor@football365.com.

Thiago the future
Liverpool were very bad in the first half and really looked like a team that was lost. The consistent tactic of passing it across midfield and hitting a cross well and truly seems to have been found out.

Thankfully, Thiago came on at half time and changed the game. After the Southampton game, Thiago was criticized and his stats were shown as being meaningless. I have to say there is some merit to that, stats cannot quantity the eye test.

In that game Thiago instantly changed the game by passing forward. His 83% passing accuracy shows that he was risking losing the ball by being creative. Recently Liverpool have looked like a team afraid to lose the ball. That Thiago completed 55 of his 66 passes shows a courage lacking in most of our team and to be honest across the premier league.  Thiago really showed what Henderson and gini don’t offer in terms of forward passing. However with that being said he also competed 4 out of 4 dribbles and won 2 Ariel duels.  I know people will say that this was against teenagers, but Thiago has done it on the biggest stage and won the champions league. I think when watching these players, one must assess with their eyes rather than using arbitrary stats to show who is the best player.

I’d love to see Fabinho, Thiago and Naby lad playing together.  It would offer something different that Liverpool are currently lacking. I think for the United game our best bet is playing  Thiago,  Henderson and Shaqiri in a 4231. At the moment being a Liverpool fan is tough, but with Thiago it’s clear brighter days are ahead.
Sean

FA Cup demise? Bullsh*t
I’m sick of hearing about the demise of the league and fa cup in this country. There are around 6 or 7 top class managers and clubs in the PL right now who require a cup as a minimum requirement to validate their season.

There are probably a further 4 or 5 clubs in the PL that whilst not a necessity, a run to the cup final and possibly winning it create memories that will last for a life time.

There are 4 cups to be won in a season and to gain entry to one of those you need to have either finished in the top 4 of the PL or won the Europa League the previous season, another competition on the demise.

Football is about winning competitions. If anything, the Fa Cup and the League Cup have gained prestige over the last 10 years. City have been to the last 4 League cup finals. The top 4 or 5 of the PL have hoarded the Fa Cup between themselves over the last 20 years.

The Fa Cup and League cup are losing any prestige. They’ve gained prestige and value over the last decade and whilst we have Leicester, Everton and Southampton upsetting the equilibrium theyll continue to gain even more prestige.
Dale (Stats pulled out my a*se) Leeds

As everyone knows, there are many ways to skin a cat and you can play with a fat person in your team if you give them a specific job and you stick to it.

I’ve played in 5 a side team in Leeds with another fat guy and we murdered everyone. I was the wall at the back and he was “the Goat” up front. Honestly he never chased back at all but we accepted it and just made sure he got the ball, because he scored almost every single time. Win the ball, feed the goat, win games. I’ve seen countless examples across the grassroots and let’s be honest, the fattest guy almost always has the best shot.

Proven by my halfway line volley into the top corner at the end of last year!!

Blades blanks
Had to come back on this to fill in a few blanks on the way the Blades have collapsed this season.

A major contributor to the current calamity is the loss of Henderson and O’Connell and with it went the locked door of our defensive unit from last season. Harry Ramsden looks like a keeper with no confidence which permeates the rest of the defence. No clean sheets in how many? He’s not even close to an adequate replacement for what we had, plus the recruitment of Championship defenders to cover for Big Jack has not really paid off either. Consequently, we have a defence full of holes, prone to silly mistakes and with no consistency.

Secondly, we seem to have lost the attacking mojo and instead seem to just furtle around on the edge of the box before passing back to the half-way line. No-one has the balls to run into the box and have a dig, and the sharp incisive passing triangles completed by a quality cross into the box by Baldock, etc have also melted away. No finished product.

Midfield is in the comfort zone with no apparent desire to get creative and back up the front men. It’s all too slow and predictable.

Our recruitment is shambolic too. Whoever thought Brewster was worth £23m must be nuts. Ollie Burke is no solution (never been on a winning side in the Premier League) and the money spent on Ramsdale and assorted Forest and Derby players might as well been spent on just one decent recruit. I appreciate we are constrained by finances, but that should encourage wiser spending, not the scattergun approach adopted in the hope that one piece of this mud might stick to the wall. Even Berge looked bang average with no drive to get into the box, although he is out for a while now too.

Crissy Wilder and Alan Knill have worked miracles with the squad they had, but had the legs kicked from under them with the loss of Henderson and O’Connell, plus they have been dealt a poor hand by the scouting network and the recruitment policy.

Wilder proved you can make a silk purse out of a pigs ear, but only the once it seems. He now needs more silk and deserves the backing of every Blade, because what he has achieved is nothing short of fantastic and it has been a great journey. Unfortunately, it seems we went out first class and are coming back with Ryanair.
Bladey Mick (football – it makes me shout at the telly)

Have Man Utd become the old Arsenal?
In the morning Mailbox Angad (MUFC) asked Are we the new Arsenal? (in the sense that we can’t win big matches).  I’d say you’ve got your wires crossed there as under Arteta Arsenal have beaten Liverpool twice (once on pens), Chelsea twice, Man U twice and Man City once and those wins included winning a cup semi, a cup final and the community shield all as underdogs.  Which, apart from the trophies was very much what Ole’s Man U team were doing for a lot of last season.  Arsenal have struggled more against the rest of the league and less so in the ‘big’ games, so perhaps the question is better phrased as have Arsenal become last season’s Man U and have Man U become the old Arsenal?
Rich (AFC)

Keane Ireland’s greatest ever player?
Grand piece on Robbie by Johnny Nic. Terribly underappreciated he was when in the Green. For my money he’s our greatest ever player. Yes, Brady is arguably the most talented we’ve produced, Paul was wonderful and we all love him and just want him to be well and Roy was is and will always be Roy but Robbie Keane scored 68 goals for us.

Sixty-eight. Next on the chart is big Niall with 21.

Still drives me mad when I hear anyone throw out the lazy arguments – ‘nearly all penalties, who did he score them against, never did it against a big team’.
Nonsense. Look who he f***ing scored them FOR. We’re not great like, and he scored in plenty of big games and ALWAYS played.

A seventh way to finish out the league
In Ireland we called it World Cup. I think it’s called Wembley in the UK. Each team has one player as a representative. Score and you are in the next round. Keep going until only two are left. Winner is league champion. A keeper from outside the league. Jumpers for goalposts and a rough consensus on where the crossbar is. So, who are your team sending? And who is winning?
Kev, Dublin (Kane. It’s going to be Kane)

More Cavani worms
Well, I seem to have opened up a can of worms with my Cavani post yesterday.
Good to see some intelligent debate though.
Let’s open another can on this subject of interpretation.

In Spanish, the word duck is translated as “pato”.
In Spanish-speaking culture, the word pato is also a slang and mostly derogratory term for someone of same-sex tendencies.
If Cavani picks up on the local Lancs vernacular and starts calling everybody duck, does CONMEBOL and FIFA ban him for the use of a slur as it is translated in Spanish?
Even though it’s a common term of endearment in Manchester?

By the FA’s current logic, bans and fines would also have to happen with English words used in social media posts that can be interpreted as slurs in other languages. Even with English speaking players who use the Americanised “My N#gga!” familar greeting. And before you point out the obvious, I’ve heard plenty of people of all colours use that phrase intermingled and toward each other because THAT is deemed acceptable amongst them culturally. Which is basically what Cavani did in his own way of familiarity with his friend.

See the double standard here? This story is being laughed at in Costa Rica by everyone who knows what Cavani means because they use the word everyday with all tones of skin colour towards each other, and even more laughs for England and the FA for highlighting it!
This is my point all along. The FA’s knee jerk and culturally unaware jobsworths have opened up the potential for utter madness by singling Cavani out. Cavani may not have been “cancelled”, but the cancel-culture mob have hurt his reputation with this. Bigger question should be how many resources are the FA using going through all the player’s social posts when lower league clubs are almost out of existance?
Terry, Costa Rica

In reply to Bob Cheese in the comments (or for anyone agreeing with the FA), The FA don’t need to be aware of everything, in the context of Cavani or any such concerns, the research/investigation should have been done before charging someone for something, as they say innocent until proven guilty. It just looks like they(The FA) wanted to make a scene. “Hey everyone look we’re doing our job”, reality is they just got a proper opportunity to put on a proper PR shit-show.
Avery (MUFC)