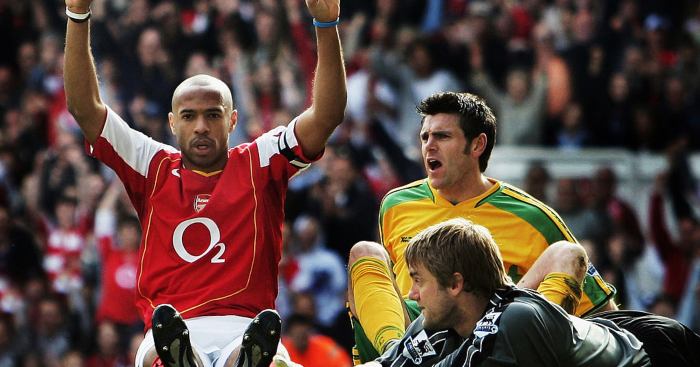 Thierry Henry says that he was once “embarrassed” to score a hat-trick for Arsenal after performing badly during the match.

Henry scored 175 goals in 258 appearances during his time at Arsenal leaving him sixth on the all-time Premier League goalscorers list.

The former France international bagged three goals as the Arsenal beat Norwich City 4-1 in the 2004/05 Premier League season but the Gunners legend has revealed that it made him “embarrassed”.

Speaking to Leicester City midfielder James Maddison on Puma Football’s Instagram: “I always say that I used to speak my mind and people used to be shocked when I say what I say, you can ask Kolo Toure [Leicester coach] I tell it how it is if you don’t like it we can move on.

“I scored a hat-trick against Norwich once but I did not move. I was embarrassed, I was actually embarrassed. I was really bad but I scored three goals.

“It’s always unfair. I always say strikers are judged on goals but they get away with murder sometimes.

“You know you have to carry a striker sometimes knowing they can help you. That’s why when I was playing I started to think assists were very important.

“Sometimes as you know your team defends for 90 minutes, you’re looking at them defending and you can’t help so when I could in games I would give assists. assists for me are as important as goals, if not more important.”