Home All The News Things are looking up at Valencia, says Neville 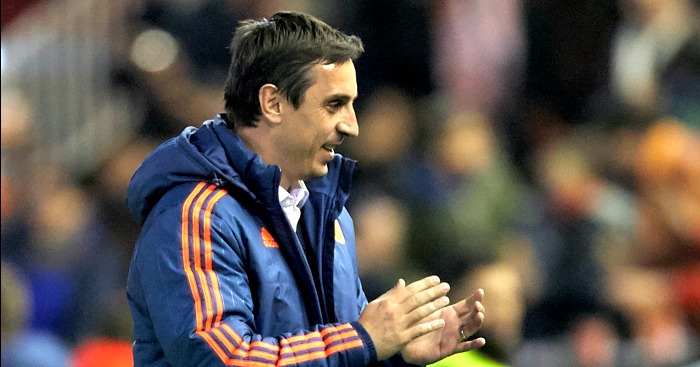 Gary Neville says confidence is returning to his Valencia side ahead of Sunday’s match against Athletic Bilbao.

And the team’s recent successes in Europe have also run in tandem with two victories – against Espanyol and Granada – to move them up to 11th in La Liga ahead of Sunday night’s match at the Mestalla.

Neville’s side then travel to Malaga on Wednesday before hosting Atletico Madrid the following Sunday in what is likely to be a testing seven days for the Englishman and his side.

“We have a very big week,” said Neville. “But the confidence going into it is good.”

Reflecting on his team’s impressive victory in Austria on Thursday, the former Manchester United and England defender added: “The professional attitude and mentality were the things I was most happy with. The performance was very good.

“I told the players we had two jobs – one was to complete the tie and also I wanted the momentum to keep going and I wanted a good performance. Thankfully we got both.”

Valencia’s 6-0 victory in the first leg allowed Neville to rest a number of his squad ahead of Sunday’s match against Bilbao.

“All the players are fresh,” Neville added. “We left six or seven players behind with Pako Ayestaran [assistant manager] and our fitness coach to prepare them.”

Athletic, who by coincidence were drawn to face Valencia in the next round of the Europa League on Friday, will provide a stern test to Neville’s winning run.

But while they are three places above Valencia in the table, they have lost their last two La Liga matches and played out a hard-fought 1-1 draw against Marseille on Thursday to ensure their passage through to the last-16 stage of the Europa League.