Home Mediawatch Think Mustafi and Koscielny were poor? Think on… 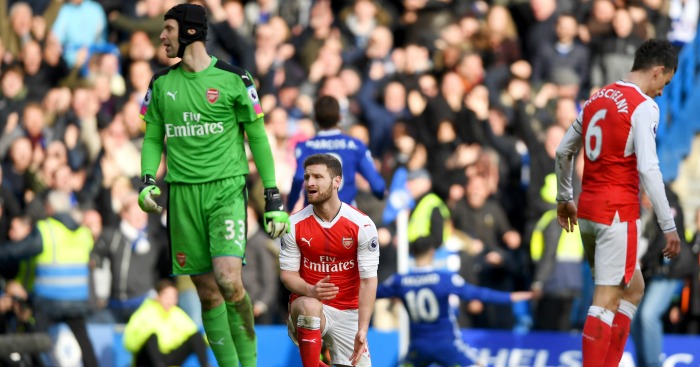 Axe the Ox
You may have read on Saturday that Alex Oxlade-Chamberlain accidentally liked a tweet calling for Arsene Wenger to be sacked. We know this was an accident because a) he said so and b) he is far too intelligent not to realise that it would cause something of a sh*t-storm. We could also add c) it’s really very easy to accidentally like something on your phone.

But that does not stop The Sun’s Neil Ashton extrapolating this slip of the finger into the opening 22 (yes, 22) paragraphs of his match report.

Apparently, Oxlade-Chamberlain liking a tweet was ‘inexplicable’ and ‘a million-to-one shot’. It was ‘plain daft and stupid’. Ashton goes so far as to suggest that Arsene Wenger should follow the example of Sir Alex Ferguson and give The Ox ‘the hairdryer’ and then the axe. Yes, he should lose his job for accidentally liking a tweet. Because that’s definitely not absolutely mental.

Ashton writes: ‘Arsenal, Ox, included, did not fancy this. That was the real message.’

So is that why The Sun – who use WhoScored ratings for their Dream Team game – downgraded The Ox from a 7.71 to a 7? Because acknowledging that no player on the pitch made more tackles than Oxlade-Chamberlain might dilute Ashton’s really quite preposterous argument…

ArsenalFanPaper
The wonderful thing about the Daily Mirror’s Arsenal superfan John Cross doing player ratings from two games this weekend is that we discover that he believes Arsenal centre-halves Shkodran Mustafi and Laurent Koscielny (lost 3-1, both 7/10) were exactly as good as Antonio Valencia, Eric Bailly, Chris Smalling, Paul Pogba, Juan Mata, Marcus Rashford and Zlatan Ibrahimovic (won 3-0, all 7/10). Oh, and every single member of the Chelsea defence.

Mind you, they’re not alone; Marcel Desailly and Robert Pires picked a combined XI for The Times on Saturday and did not include a single Chelsea defender. Lord knows how they have somehow contrived to concede fewer goals than every Premier League side bar Tottenham.

Right back to where we started from…
Garth Crooks clearly wanted to include a West Ham player in his BBC team of the week. After all, they had won 3-1 at Southampton. So would he pick Andy Carroll, scorer of a lovely goal? Would he pick Pedro Obiang, who scored one goal, made another and pulled off three tackles and made the same number of interceptions? Or would he pick right-back Cheikhou Kouyate, who produced an astonishing five tackles, six interceptions and five clearances in just 70 minutes?

Of course not. He picked Michail Antonio. At right-back.

Scout jamboree
Garth has found an advantage to being a foreign manager. It’s not all about digging in, you know.

‘One of the benefits of being a foreign manager is Marco Silva will probably have a healthy network of international scouts who can plunder the January transfer window.’

Yes, because under FIFA rules, British managers are not allowed a healthy network of international scouts.

Garth was writing about Andrea Ranocchia, an Italian international on the bench at Inter Milan. The real question should be why Hull were the only ones to spot that he might be a) decent and b) available.

Misery at Man City?
One last thing from Garth, because frankly we cannot resist.

‘I don’t know what is going on at City but it doesn’t look like a happy camp to me. When Pep Guardiola continues to play around with team formations, [which is his prerogative], leaves his best striker out and substitutes Kevin de Bruyne [who looked far from happy], you start to question his motives.

‘Is he losing patience with his stars and putting ‘faith’ in those more likely to do precisely what he says?’

Yes, they certainly looked miserable when they won their second Premier League game in five days to move into third place in the table. Silly Pep for dropping a striker struggling for goals in favour of a player who really has done absolutely nothing to justify that decision. He will surely learn his lesson after Jesus scored just three goals in two games.

Is he losing patience with his ‘stars’?

Bizarre intro of the day
‘YOU would expect the continental boss to have the mantra Que Sera, Sera – not the one born in Kettering’ – Vikki Orvice, The Sun, in her Watford v Burnley report.

Nope. We would not expect an Italian to have a Spanish mantra. Note: Not all foreign is the same foreign.

How does he find the time?
Headline on MailOnline: ‘Terry takes time out from Chelsea’s title run to spend time with rapper Drake after O2 Arena show.’

As of Monday at 10am, that was the third biggest story in football.

As of Monday at 10am, John Terry has played six minutes of Premier League football since September.