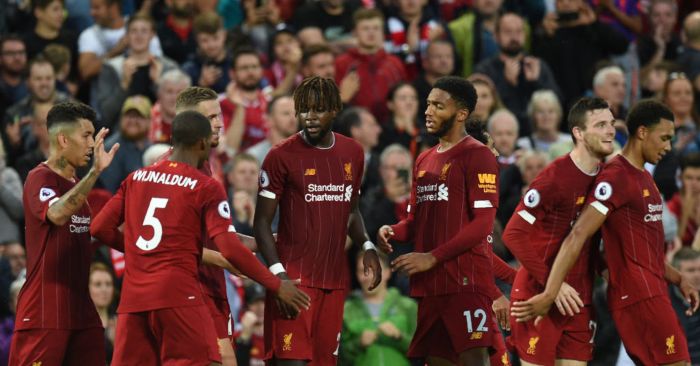 It wasn’t so long ago that Liverpool’s great weakness would reveal itself at Anfield in exactly this sort of game. Their inability to win points against lesser sides has been slightly mythologised, that’s generally how these things work, but it was certainly a problem and one which, for a long time, they couldn’t escape.

But in evidence this Friday evening was the great, contrasting strength that Jurgen Klopp has created: the power of reputation.

This was a horrible night for Norwich and Daniel Farke will be dismayed by how ill-prepared his side looked. Especially given that his players have had a month to organise themselves for this fixture – to study all the film, to learn Liverpool’s attacking patterns and, ultimately, to not get beaten by the sort naivety that becomes inevitable in mid-season, when the gap between fixtures is days rather than weeks.

But then this is the aura which has been pumped back into Anfield. Liverpool supporters will tell you that last season wasn’t just about Klopp’s furious football and they’d be absolutely right. It doesn’t change the opposition’s expectations, though, and the instructive dread they feel when their coach pulls into the car park. When visiting sides are in that tunnel and are about to face that team, they know what’s waiting for them at the bottom of the steps. It will be a relentless physical examination during which an almost intolerable pressure will be exerted on their every touch.

It’s like those poor guys who stood in the corner opposite Mike Tyson in the late 1980s: they may have tapped their gloves as the bell rung and made all the right faces, but really – really – they just wanted to hit the canvas as quickly and as painlessly as possible.

And that was Norwich on Friday. It was certainly Grant Hanley, whose feeble prod into his own net reeked of exactly that sort of fear.

So this is Liverpool’s great strength now. Anfield is Old Trafford in 98/99, Highbury during the Invincibles era; somewhere that most sides don’t go to win, but where they try not to get too badly hurt. Most pertinently, Manchester City have held that advantage for several years. As reported in an article by Miguel Delaney earlier on Friday, there are coaches in the Premier League who seemingly give their players a free pass for anything that happens at the Etihad, excusing everything on account of City’s financial advantage and resultant strengths.

Liverpool don’t have quite the same primacy, but even just in theory their threat is intimidating – and conceding within seven minutes of kick-off obviously makes it more so. One of the reasons why Klopp emphasises the opening quarter of games is – presumably – because he understands how dispiriting a deficit must be. Manchester City needn’t fear falling behind to Liverpool, but every other side in the division should. Most just can’t balance that ambition with the right amount of security, opening themselves to a terrifying counter-attack, and the moment Hanley deflected past Tim Krul, he and his teammates knew they were in for a long night.

Which explains much of what happened in the first half. Farke probably did urge his defenders not to allow Mohamed Salah to run beyond them. But through he went and 2-0 it became. He obviously did preach the virtue of not allowing Virgil van Dijk a free header from between the posts. But he still got one and it was three-nil.

The real value of this currency, then – this pervasive hopelessness – is that it chisels away at those tactical imperatives and makes otherwise competent players appear amateur. If Norwich’s defence conceded tonight’s fourth goal on the training pitch, Farke would stop the session and send the players inside. An undisguised, floated diagonal ball resulting in such a simple header between two defenders? That wouldn’t be acceptable in League Two.

The reason this is such a common hallmark among successful sides is that it allows them to win games without playing well. It’s probably of more value during the busy days of December, January and March, when all the competitions are running simultaneously, but here was an early example.

Liverpool weren’t good. They were sloppy in defence and porous in midfield. They were imprecise in attack and seemed to pick and choose when to engage their high press. It was an average performance decorated by some pretty highlights and, you suspect, Klopp will be emphasising what the score might have been rather than what it was.

But teams who win trophies win games that look like this. They have to, in fact, and that’s particularly true in Liverpool’s case, when the margin for Premier League error is so slender and when maintaining energy and focus equally across a 38-game season is impossible.

Winning in the tunnel isn’t just a virtue, it’s a pre-requisite. By the time Norwich had realised that what they imagined was far worse than the reality they were facing, the game was lost. Yes, Klopp will have hated much of what he saw this evening. But he’ll also recognise just how far inside most opponents’ heads his team are able to get and, historically, that’s worth much more than any stylistic perfection.