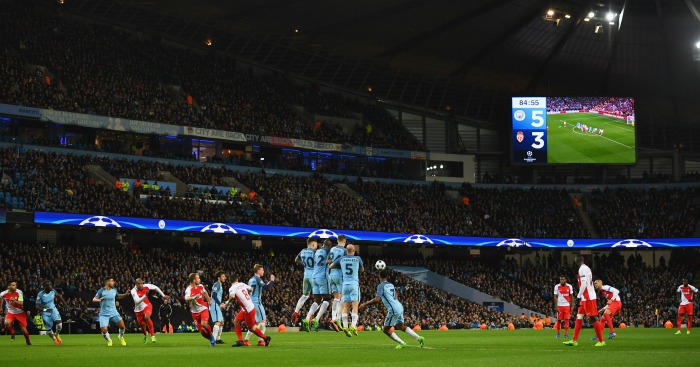 Like the perfect reverse park when nobody was watching and the perfect high note when nobody was listening, the perfect Champions League game (a 5-3 win for Manchester City) was wasted on a channel that almost nobody watches. A match that featured 90 minutes of ludicrous defending, ridiculous skill and relentless entertainment should have been watched by everybody who loves football and plenty of those with just a passing interest.

When the fourth goal was scored in the 58th minute, partners should have had books kicked from their grasp; when the fifth goal was scored in the 61st minute, kids should have been dragged from their beds. There should have already been a flurry of texts telling those without a Twitter habit to switch on their TVs because they were missing a classic. This was a genuine eight-goal thriller, with goalkeeping errors, goalkeeping heroics, amateurish defending, amateurish tactics, amateurish refereeing, sublime finishing and lashings and lashings of unadulterated fun.

And yet almost nobody I know was watching. It’s likely that under a million people saw the most entertaining game of the season so far, because it was tucked away on a channel available in a small minority of homes. There is nothing inherently wrong with BT Sport’s coverage but it is seen as a luxury that only few can afford, or at least justify. On Tuesday night it was a specialist channel broadcasting a game that would have had mass appeal.

Were that game on terrestrial TV, the audience might have started at five million but the graph would have soared as the half-interested became intrigued by the score. On Wednesday morning, commuter trains and workplaces would have been abuzz with talk of that mental game; “I don’t normally like Man City but…”

Some people will be screaming the word ‘streaming’, but the truth is that my father would not even understand the word and my neighbour would never dream of watching football on his laptop. These are the people that would have been watching this game if it were on ITV. They watched a man eating a pie during a one-sided FA Cup match on Monday night but as far as they were concerned, there was no football on the telly on Tuesday.

In February of last year, the Daily Telegraph reported that UEFA were ‘concerned’ by Champions League viewing figures that were described as ‘dismal’; by April, the Daily Mail claimed that UEFA were privately admitting they had made a ‘mistake’ to grant BT exclusive live rights. This week, we are reading that Channel 4 will join ITV in trying to ‘sub-let’ rights from a digital broadcaster. After 18 months when British interest in the world’s premier club competition has plummeted, UEFA need to consider something other than the final monstrous figure when listening to the next round of bids.

As much fun as we have had watching a wretched refereeing performance, a laughable display of ‘defending’ from John Stones and Nicolas Otamendi, an effervescent attacking display from Monaco, a demonstration of sublime finishing from Sergio Aguero and an unashamed outpouring of joy from Pep Guardiola, we do not want to selfishly keep that fun to ourselves.

The memes might tell us to dance like nobody’s watching, but football is undoubtedly better as a shared experience. For that, it needs an audience.