Home All The News ‘This isn’t Hollywood’: Pundits bemused by Terry send-off 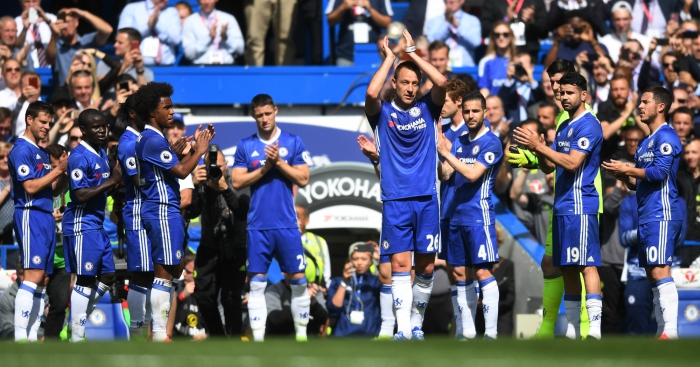 Press Association Sport understands the Premier League is relaxed about Terry’s orchestrated substitution midway through the first half of the champions’ 5-1 win over Sunderland, despite it being forecast on social media by the Chelsea fanzine editor before kick-off.

Terry revealed after the match that the idea to come off in the 26th minute had come from him, to tie in with his squad number of 26. The substitution process began when the clock ticked on to 26 minutes, which is the 27th minute of the match, and by the time he left the field through a guard of honour formed by his team-mates it was the 28th minute.

Sunderland boss David Moyes said he had received advance notice of Chelsea’s plans, and his goalkeeper Jordan Pickford obligingly kicked the ball out under direction from Blues striker Diego Costa.

Terry then embraced his team-mates before handing over the captain’s armband to his replacement Gary Cahill as head coach Antonio Conte looked towards Saturday’s FA Cup final with Arsenal.

Former Tottenham forward Garth Crooks told the BBC’s Final Score: “This isn’t Hollywood. This is a Premier League fixture. This has obviously been set up. I’m a bit uncomfortable with it.”

Martin Keown added: “I think it’s very unusual to see that. I’ve never seen it before. I know he’s a unique player. I’m not happy with the way it was done.”

On Match of the Day, Alan Shearer agreed that Terry was “an absolute giant” of the game, before adding: “I’m not sure about this.

“Sunderland agreeing to kick the ball out on 26 minutes, I don’t think anything should be done that could undermine the integrity of the game.

“I know it was done with good intentions and he deserves the guard of honour, but it should have been before or after the game or in the last minute.”

Conte afterwards said: “It was very important to find the right solution to celebrate a great champion, a great legend for this club.”

Terry received a rousing reception as the champions came from behind to win.

The 36-year-old former England captain appeared for the Blues for the 717th time, starting in the Premier League for the sixth time this season. It was his 580th game as captain of the team.

Terry, for the fifth time, and Cahill lifted the Premier League trophy afterwards before Terry addressed the supporters in a speech filled with thanks.