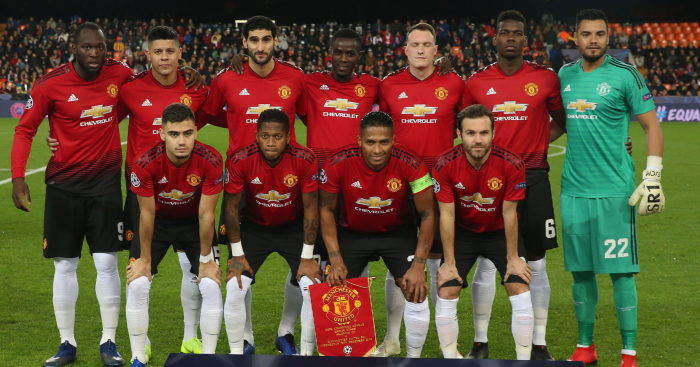 No shots on target. No movement. No width. No incision. No precision. No urgency. No suggestion of any kind of plan. In a season of largely terrible first halves from Manchester United this season, this had to be the very worst. It was ponderous and it was pedestrian; Michael Owen’s description of their performance as “very average” was very generous.

“It is Manchester United, professional players, and we want to do well,” Jose Mourinho had said on Tuesday, so we really should have known: this truly was Mourinho’s Manchester United, with as little dynamism as width. There was no change of pace to worry Valencia, no switch of play to find non-existent wide men and no defensive prowess to offer the slimmest of silver linings on a miserable night.

What’s worse? The notion that United players simply ignored Mourinho’s instructions, or the alternative scenario that he had actually instructed those players to occupy the middle ground, with Andreas Pereira and Juan Mata coming inside to join a wild party of five in the central midfield? There was no forward motion from the lamentable Marcos Rojo on the left, while Antonio Valencia was lucky to make it past the first ten minutes after a reckless tackle. So very narrow and so very easy to defend against.

As Valencia moved from one box to another in three passes, United took 13 passes to move forward less than two yards, like a live re-enactment of the Battle of the Somme but with mercifully fewer casualties. At half-time it was over to Mourinho to rouse this United side, to give them purpose and presumably a plan. Two minutes into that new plan – which now featured Ashley Young – Phil Jones produced his own piece of performance art, called ‘Phil Jones’, putting through his own net seven years after United’s last Champions League own goal, scored by Phil Jones.

This was truly dire. And remained largely dire even after the introductions of Marcus Rashford and then Jesse Lingard, though the former did at least produce United’s first shot on target after 72 minutes. That it was a weakly-struck effort from outside the area which bobbled through to the keeper as the England man fell down seemed apt.

It took until the 87th minute for Manchester United players to realise that they could carry the ball into the box, could exchange quick passes, could cross the ball from somewhere other than the corner flag. And they scored, the three substitutes combining to embarrass the pathetic starting XI. Then, having finally worked out the clearest route to goal, they almost claimed an undeserved equaliser as Valencia suddenly looked as ordinary as their league form suggests. It would have been a travesty.

If this was indeed an audition for Paul Pogba – as it was billed – ahead of Sunday’s visit to Liverpool then it is clear there will be no recall. There is zero chance of him or any of his fellow Valencia starters reprising their role at Anfield, unless injuries leave Mourinho with absolutely no option. Nobody was even whispering – never mind screaming – ‘pick me’ in the Mestalla. The only case made was for a slew of January exits. If only anybody wanted this shower.