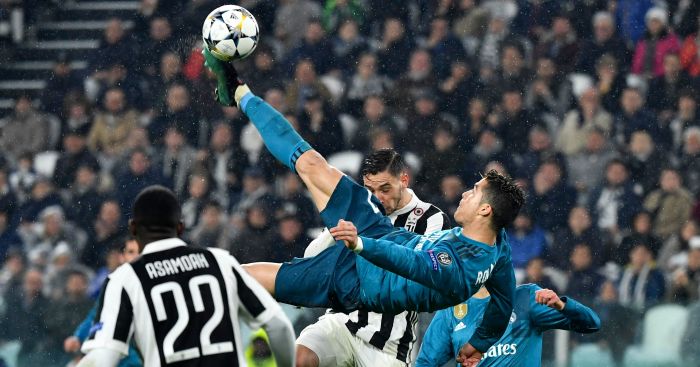 Nobody saw it coming. It looked to all as though Dani Carvajal’s clipped cross towards Lucas Vázquez in the centre of the box would be intercepted by Juventus defender Mattia De Sciglio. Then, to everyone’s surprise, the greatest goalscorer in Champions League history rose out of nowhere to beat them both to the ball, and produce a finish of breathtaking audacity and perfect technique.

Cristiano Ronaldo’s spectacular bicycle kick against Juventus on Tuesday night was first met with incredulity and exaltation from commentators and fans alike, including the Bianconeri fans in the ground who rose to their feet to applaud the brilliance to which they had borne witness.

The reaction on social media took a familiar path, as the initial outpouring of astonishment and praise was followed swiftly by numerous tweets from those who felt the goal didn’t deserve such gushing acclaim. Many argued that similar goals have been scored by the likes of Andy Carroll, Trevor Sinclair and more recently by Ashley Barnes, without receiving anywhere near the same plaudits.

While many of those dismissing Ronaldo’s goal as nothing special were no doubt simply being contrary for contrary’s sake, or wishing to appear aloof and enigmatic, for many it was an understandable reaction to the sometimes overwhelming hype surrounding the game’s great and good. The argument is “you’re only making a big deal because it’s Ronaldo”.

But that’s exactly the point. They are making a big deal because it’s Ronaldo, and with good reason.

Of course other, less celebrated players have scored similar, perhaps even better goals than Ronaldo’s, but how many have scored such a large amount, on such a high stage, so consistently over such a long period of time?

Players of Ronaldo’s ilk attract hype due to the value of their exploits. We may have become slightly desensitised to his ludicrous goalscoring figures, but that he still possesses the power to surprise and amaze us with such moments of skill after so long is testament to his enduring brilliance.

Without wishing to be disparaging to the likes of Sinclair and Carroll, who have both had distinguished if not outstanding careers, their goals deserve to be compared with Ronaldo’s in isolation only. It’s all about context – Ronaldo regularly produces these moments of magic in big games, particularly in the Champions League. Not only does this mean they reach a wider audience, but the scrutiny and pressure of the occasion, as well as the quality of the opposition, are all magnified significantly.

It’s also worth noting that this hype works both ways – any mistakes, quiet games or poor form are much more conspicuous. Remember at the start of the season, when it seemed like Ronaldo had forgotten how to score? It feels like a long time ago now, but the criticism was intense.

The fanfare around Ronaldo’s goal is also in part due to his status as a showman. He is a performer, for whom style is as important as substance. And who wouldn’t want to see a brilliant magician perform an incredible new trick? It’s for this reason that Zlatan Ibrahimovic’s debut goal for LA Galaxy last week was so widely publicised – because it was indicative of the outrageous skill with which he has become synonymous over the years.

The extraordinary athleticism required for Ronaldo’s latest golazo is another reason so many found joy in this particular goal. When he was out of form earlier in the season, many felt that time was catching up with him. Now, though, with 23 goals in his last 12 games for Real Madrid, it’s fair to say that such fears were wide of the mark.

The fact that he can still leap like a salmon and execute a perfect chilena in the blink of an eye at the age of 33 shows he is as fit as he’s ever been. He is a paradigm of what can be achieved through hard work, determination and self-discipline.

When signing a new contract last year, Ronaldo said he could play on until he is 41. Although said with tongue slightly in cheek, his fitness levels and unrelenting skill suggest that he could continue playing at this level for many years to come. And if he continues producing such moments of magnificence, that can only be good news for football lovers the world over.