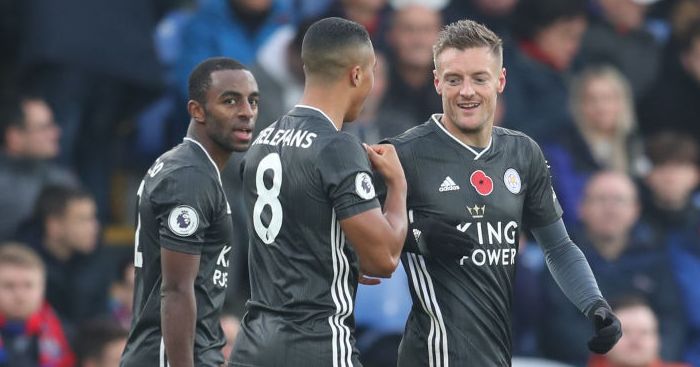 “There’s no chance of complacency,” said Brendan Rodgers. “We’re very focused on winning, we did that in the week and we take that into our next league game.”

Forgive the imagery, but the Leicester manager was practically adorned in little more than a satin robe and full make-up, such was his desire to tempt fate against Crystal Palace. His almost parodical attempt to play down that Southampton shellacking – “there was a period between the 58th minute and the 84th minute where we didn’t score” – betrayed a manager and a team struggling to contain their excitement.

Not that elation was unjustified. Leicester are legitimate Champions League contenders, and last week’s was a legitimately impressive, statement-making, record-breaking performance.

But such wins can have an adverse effect on mentality, attitude and approach. It is impossible to not get carried away. It is inevitable that the peak of a rollercoaster is followed by a relative decline. It is inescapable that orgasmic football requires something of a recovery period. Give them ten minutes and they will be fine to go again, just with less energy, vigour and penetration.

Better teams – not many, granted – have recorded similar victories in England’s top flight before. It was the 16th win by a margin of seven goals or more in Premier League history, the biggest away from home.

Yet while there is a genuine human interest in how teams respond to such defeats, there is a basic and incorrect assumption that the victors simply continue on an upward trend. Before Sunday, only six of the 13 teams that had won a Premier League game by seven or more goals won their next league match in the same season. Three drew; four, including Arsenal after 7-0 wins over Everton (2005) and Middlesbrough (2006) lost.

Manchester United themselves struggled in the aftermath of hammering Ipswich 9-0 in 1995. They beat Wimbledon three days later, but only through Steve Bruce’s 84th-minute winner. A subsequent draw with Tottenham and defeat to Liverpool eventually cost them their title defence.

So this, a 2-0 victory against a Crystal Palace side only Manchester City had beaten at Selhurst Park since early March, is just as excellent and accomplished a result for Leicester as the Southampton thrashing. It was more of a struggle than a stroll, more of a battle than a battering and more of a grind than a series of seamless gear changes, but the gap in quality was still evident.

The killer instinct at St Mary’s was replaced with a patience and calm in Croydon. At the time Caglar Soyuncu opened the scoring in the 57th minute, Leicester were already 5-0 up against Southampton and would score twice more within the next 120 seconds. Yet there was no panic. How could there be with Jonny Evans in central defence? There was no agitation. Is that even possible with the tireless Wilfred Ndidi? There was no exasperation. Can there be with the timeless Youri Tielemans on your side?

There was restlessness, but only the usual amount from Jamie Vardy, whose late goal concluded a team move of genuine brilliance to keep Leicester within touch of a seemingly unparalleled top two, with the league’s best defence and second most potent attack.

Rodgers was right not to doubt them, even if history suggested he certainly could have.