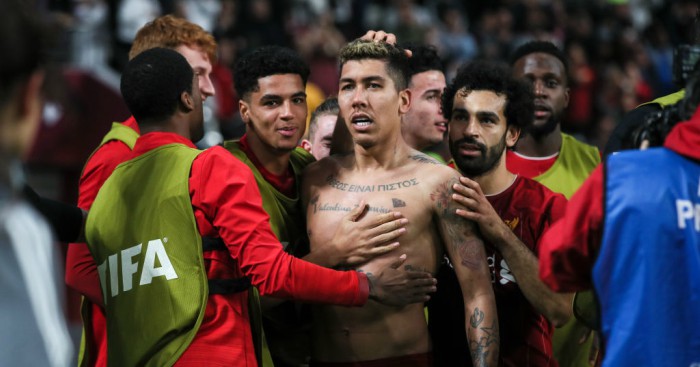 That it took almost 99 minutes to score will feel like a blow to the stomach of their campaign for domestic and European glory – forcing more minutes and more football into legs that will have to run and run this season – but in terms of legacy, in terms of English football fans taking this tournament and this trophy seriously, then it is absolutely perfect that this was so difficult. That this was a battle. That this was a result that looked in doubt for so long.

Had Liverpool turned up in Qatar and rolled over two opponents with ease, people would have spoken about glorified friendlies against chumps from footballing backwaters; they would have asked why this famous club sacrificed the League Cup to stroll around in the Middle East in a two-bit, money-making exercise. But this was so, so much more than that. This felt intense. This felt important. And it certainly felt competitive.

As Liverpool have done for much of the season, they struggled with their rhythm for large portions of the game. And barring short, punchy spells at the beginning of each half, Flamengo gave almost as good as they got. They largely pinned back Liverpool’s full-backs, they worked out how to avoid the Liverpool midfield press, and they posed so many questions of their own. Chasing a famous victory, they arrived in Qatar with motivation but no little quality. For the first time in seven years, a South American victory felt very possible. Along with the inevitable and potentially damaging deflation of this Liverpool side.

The passed up chance after chance and were then denied the most gilt-edged of chances when VAR overturned the award of a penalty. That the referee did not award a free-kick and a red card will likely never be explained, but thankfully Roberto Firmino’s extra-time goal has spared us all a lifetime of conspiracy theories.

We know several things about this Liverpool side – that they are brilliant, that they have a wonderful manager, that they boast some of the world’s finest players – but the most relevant after that non-penalty award was that they no longer run out of time. “You get the feeling this might not be Liverpool’s night,” opined the commentator. No such thing, fella. These days, it’s pretty much always Liverpool’s night. They have the kind of ‘luck’ that comes with being a magnificent football side. Clue: It’s not luck.

“We don’t want to be remembered as the team who won one major trophy. We want people to remember us as a group and forget which year we won each trophy,” said James Milner in the build-up to this tournament. It was easy to smirk as this was a Liverpool side that had won just one major trophy and were on their way to play in a tournament given that kind of billing by almost nobody this side of the Atlantic.

But now, thanks to a game that was closer than was ever comfortable for over 120 minutes, and thanks to a tension that was palpable from thousands of miles away, this does feel like a major trophy and this Liverpool side is absolutely on its way towards the kind of greatness that is remembered for generations.