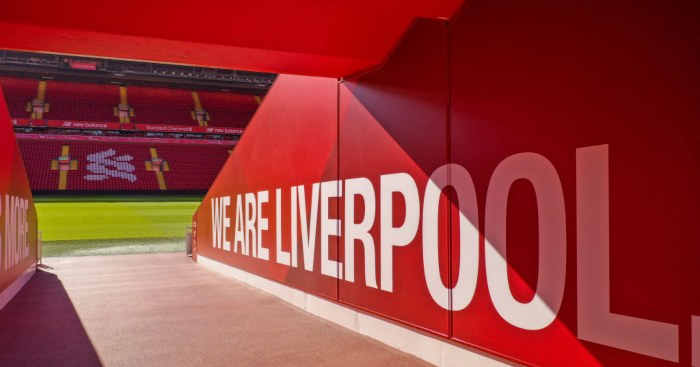 Is there such a thing as Liverpool exceptionalism? A belief that somehow, LFC is special and different to any other football club.

The whole ‘this means more’ business has always smacked of the sort of thing someone in marketing would write to try and appeal to Liverpool fans, rather than something the fans themselves would come up with.

But it annoyed many and was perceived as arrogant and unnecessary and typical of LFC exceptionalism. But then, many do feel Liverpool are different, are in some way special. And not just supporters. Outside of old enemies, there is warmth in the collective football heart that LFC are champions this year. Partly this is because of the nature of the manager, the players and the thrilling football they can play. But it is also simply because Liverpool are loved by people beyond their fanbase.

It’s a complex club in some ways, pulling on a lot of different strings for different people at different times.

For the generation that grew up with Liverpool being the preeminent force in English football, there is a simple nostalgia to seeing them head the league. A reminder of youth, of David Fairclough running in on goal on a riotous European night. Of the medium wave crackle from distant lands on dark victorious European Cup nights.

Like a favourite record from our youth, they are, as a club, in some way transportive. The middle-aged football demographic hasn’t forgotten those days of Shankly, Paisley, Fagan and Dalglish. These are figures of massive heft and status that live in the collective football consciousness like footballing Easter Island statues of the mind. That’s why sections of the media eulogise them and it is in this architecture of the imagination where Liverpool’s exceptionalism lives.

It was always said that a Liverpool crowd was a knowledgeable crowd, that they were appreciative of good football, whichever team played it. This does seem fanciful, I admit, especially in the age of bullying social media pile-ons which, as anyone who has ever worked in football media will tell you, can come from Liverpool’s fanbase as easily as any other.

And yet it sticks. There feels to be something different about LFC. Not better or worse necessarily but certainly different.

For all their wealth and investment, they feel more like a Scottish club than a modern corporate English organisation. By which I mean they are set in the heart of the red-brick terraces of the community which birthed the club, still largely supported by the working class, still drenched in long-established values.

There is a raw passion about Anfield that perhaps is the legacy of celtic hearts and history that mirrors much of Scottish football. There is also a powerful bond between club and people. One being an expression of the other and again, this all helps feed the notion that this is a different club. These mediate the nature of the ownership and the cold waters of extreme capitalism that the club has to swim in.

There is the legacy of wonderful players. Great goalscorers from Roger Hunt, to Toshack and Keegan, to Rushie, Beardsley, Barnes. Fowler, McManaman and more. The legacy of red wall defence from Ron Yeats, to Tommy Smith, to Alan Hansen, Sami Hyppia and now Virgil Van Dijk. Enough legendary talents to make any club legendary.

In some way it feels as though LFC is a football equivalent of a Norse myth. God-like heroes talked about in hushed tones, stories of great derring-do passed down from generation to generation on long dark nights, over strong drink, as the fire burns low.

The club somehow facilitates such great romance, great stories and long-lasting affection. Their 4-0 defeat of Barcelona last season felt quintessentially Liverpool. Only they could write their legend in this way, in this skin-prickling, almost supernatural, unbelievable way.

This is how Liverpool FC has become an entity greater than its parts for many people. No matter who is playing or managing or owning the club, it is a body separate from such transience. A Force.

Obviously, every club’s fans have a sense of their own exceptionalism. I feel that strongly about Middlesbrough but I don’t feel it about any other English club apart from Liverpool. It is something metaphysical and unknowable, which, if you tried to grasp, would slip through your fingers like summer morning mist.

The affection spreads worldwide and has done for many decades. There is something magnetic about Liverpool. Something romantic and eternally appealing, not just as a football team but as a concept. Even the relatively less successful Premier League years didn’t really diminish this, suggesting that it is rooted in something more permanent than the glory of silverware.

There seems no distinction between the city of Liverpool and the club. One feels to be an expression of the other. This isn’t unique in football but it is increasingly rare in these more culturally homogenised days.

So there absolutely is a case for Liverpool FC exceptionalism. It doesn’t mean they are better, superior, perfect, holy or the best (though this season, they are obviously the best) no, they are just different. Other clubs can make such claims too. Of course they can.

Many won’t agree of course, crushing, negative tribalism insists on that, but Liverpool’s specialness is something you either feel or you don’t. It can’t be proven with statistics any more than you can prove one piece of music is better than another. It can only be felt. And I for one, do feel it and have felt it for over 40 years. And in that, I am far from alone on the planet.

Discuss all this on the rescued F365 Forum