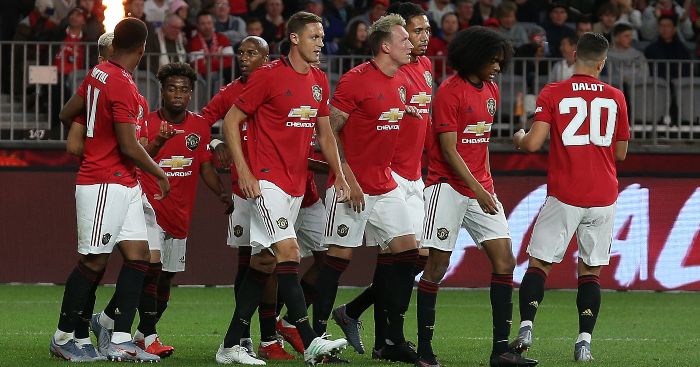 Send your mails to theditor@football365.com…

United will be back
Reading through the article on “Let’s stop pretending Arsenal and Man Utd are shambolic…” and a couple of things struck me as not being completely true.

Firstly, the implication that having a cold bastard run the club means that making money is the ultimate goal and therefore titles are not important which implies financial success and titles are mutually exclusive – I’ll come back to this.

And secondly, Man Utd’s apparent “slide down the table” pushed my buttons along with other similar phrases fellow mailboxers and the media like to say. Suggestions of our apparent demise into mid-table obscurity and the like. Man Utd’s highest finish since Fergie left is 2nd. Liverpool’s highest position since Fergie left, also 2nd, but Utd are in apparent turmoil – granted Liverpool’s trajectory and last season’s finish are enviable, I’m not completely blind. A slide down the table for me would be Chelsea in the season they finished 10th after being champions the previous year. I am being pedantic here but the point is, yes, Man Utd are not what they were under Fergie for so many years but, while fans would have hoped success would continue, in reality, like when Liverpools dominance in the 80s was broken, it is very difficult to get back to the very top.

Utd are also judged differently to the rest. Arsenal also used to win titles but it’s OK for them to be “rebuilding” since 2003/04, the year of the invincibles they still hang on to while conveniently forgetting that was their last premier league title that also represents the end of the peak they have since never got vaguely close to. OK, Arsenal probably couldn’t afford to pay Man Utd’s prawn sandwich bill so maybe that’s an unfair comparison but Chelsea also have different standards to uphold and have plenty of money. It seems to be OK for them to go from winning the title one year to not making Champions league the next. And even Liverpool, the champions elect. Average league position since Fergie left Utd, 4th (Utds is 5th), but let’s hail Liverpool as one of the bestest teams in the premiership ever just because they got lots of points last season in a year when quite frankly, Arsenal, Man Utd and Chelsea were collectively at their worst for several years and even Spurs punching above their weight were out of the race by halfway (if they were ever in it). Newsflash – no-one remembers who came second. I hope that the rest of the top 6 will have more influence on where the title lands this season but this past season was actually piss poor in footballing standards for the top of the table clashes apart from the top 2.

Which brings me back to my first issue, that a cold bastard running a club implies you just can’t win titles. Maybe it makes it harder that if you had a multi-billionaire who is also a lifelong fan but think about it? Of course any cold bastard would prefer title than no titles as it will build the brand (asset). It may not be the primary aim but it must still be an aim. Man Utd have not exactly had purse strings tightened aka Arsenal. The more noodle sponsors and tractor sponsors we can get (do we have a prawn sandwich sponsor yet?) just means the club will be more willing to give a fraction of that revenue to the team and as the overall money increases then that fraction is just worth more and more. The money is there to spend as proven every year which suggests that should we actually manage to spend it more wisely over a few seasons then there is no reason to believe we can’t get ourselves back to the top. This year won’t be our year, next year won’t be our year but with a more long term plan we can get back to winning ways one year.
Jon, Cape Town

…Alex Keble’s confused article is one of the weirdest things I have read on F365. Alex, every club looks to satisfice which is why newly competed clubs don’t spend a billion pounds immediately in an attempt to win the title. Even if I accept your point that Newcastle is just as happy with being 17th as 7th, my question is why should the club aim for 7th only and not the title. In a word satisficing. Much of the criticism on United and Arsenal is not on being stingy with transfer budgets but spending it poorly. United have spent over 1 billion pounds since 2010. Arsenal’s spending over that period has been far less but still higher than all other clubs outside the top 6 as well as Tottenham and Liverpool (if we use net spend). Perhaps people like Alex is why FFP exists in the first place otherwise any club foolhardy enough to appoint a PL boss like Alex would either win the league the next year or simply go bankrupt. Possibly even both.
Adeel

Crusaders are coming
After successfully negotiating a two-legged tie against Faroese side B36 Torshavn, Crusaders are into the second qualifying round of the Europa League, where they will play Wolverhampton Wanderers. What a way for Wolves to mark their return to European football than with a clash against the mighty Crusaders, the pride of North Belfast, the Irish Cup holders. But seriously, Northern Irish clubs rarely get the chance to play English top flight teams these days at any level (for example, there’s no prestige in coming to NI for pre-season friendlies, when there’s cash to be made in China and America) let alone a competitive European game, so it’ll be a great experience for Crusaders – a trip to Molineux, one of the traditional homes of English football before Wolves come over to Seaview for the second leg. Wolves should win but nothing ventured, nothing gained. It’ll also give the Crues faithful a chance to see Nuno Espirito Santo in the flesh before he gets the Chelsea job after Lampard gets the sack.
Matthew, Belfast

Liverpool standing still
In the all the posturing between United and Liverpool fans at what constitutes world-class, and amid the financial scrutiny of United’s transfer spending, I am surely not the only one that thinks that Liverpool are standing still in the market?

I mean Man City pipped them to the title last season, and still went and broke their transfer record to add to their midfield, while also strengthening their left-back spot by signing an actual specialized defender.

Okay, Liverpool won the champions league, but it will be incredibly hard to replicate last year’s imperious form on both fronts without a fresh injection of faces. Even maintaining the squad’s hunger levels will be the great intangible factor.

Then again, they didn’t exactly have a stellar transfer window post-Istanbul either, so perhaps they are weary of history repeating itself.
Brian (Sanchez to have a renaissance), Wexford

Jarron’s reasoning
After quite a few mailboxes with very few mails, it seems my mail did stir up quite the storm.

Lets start with a simple premise. In the United squad, I believe DeGea is world class. To me is for the player to be in the conversation for the best in his position, in the world. In the Pool squad, I see VVD to be in that conversation.

Predictably Pool fans aren’t happy by my assertions. Yes Mane and Salah are top players, but my belief is their stats & effectiveness are inflated by the Klopp system and so are the fullbacks.

If we are talking about fans having rose tinted glasses, then look no further than Coutinho. Many Pool fans believed him to be world class, while many including I stated Barca were being mugged off and he would be rotting on their bench as he just wasn’t that good. We all know what has happened and Barca are now struggling to get rid, with nobody seemingly interested in him at those wages. This rose tinted glasses holds true for all fans as I doubt I could be unbiased if we are discussing United players.

My thinking is if this Pool team continues where they left off last season and maybe do one better and manage to pip City to the title, I think many of your players will get into that world class conversation. Won’t be easy, as Jimmy from Spain pointed out in his mail, Klopps system is very demanding of players and it should be interesting to see how long these players can continue at that pace they have been playing at, before mental and physical fatigue sets in.

Lastly Jonny (Sherlock) Dance, you win the day. You are right, on current form, I’d agree the combine XI would be very Pool favored and it hurts me to say that.
Jarron, MUFC

Damaged goods
I’m sorry but the lad is spot on, no Liverpool player would get in the United side, conversely no United player would get in the Liverpool side. The fact is no fan of either club would take any player from their bitter rival no matter how good, VVD in a United shirt? no thanks no matter how good he is, he is tainted and a lost cause sorry.
Paul Murphy, Manchester

Women’s path
Nice, if somewhat defeatist, email this morning on Women’s football from (the aptly named) Aman. Anecdotally there were plenty of female friends of mine who were not particularly interested in football but watched the WWC. So if this new ‘market’ (eurgh) of fans emerges then we don’t have to have women promoting men’s clothes etc.

Moreover, the way men’s football is hyped and advertised should not necessarily be something women’s football should aspire to. I enjoyed an mailbox contribution recently which said something along the lines of letting the women’s game develop and create their own iconic moments, heroes (do we say heroines still?), etc. I would extend this to continuing to let it develop its own ethos in terms of corporate stuff too – which may or may not match the style of the men’s game.

Crush on Crouchy
Hero of the week? More like Hero of Forever…..

Just want to wish him all the best in his retirement – he is an absolute legend.
Short Mick

Mystic Winty
As it still seems 427 years away from the start of the new season and the mailbox is fairly quiet, it might be time to revisit this quote from Sarah Winterburn (I believe) on the morning of the Liverpool vs Barcelona second leg, with Barca 3-0 up….

“It might sound like a cliche but it is all about that first goal. It’s game over if it goes to Barcelona, but if Liverpool score within the first crucial 30 minutes, you might just fancy them to score two more in an hour against a defensively vulnerable side who will be fighting those voices whispering ‘oh no, not again’ (except probably in Spanish).

Divock Origi to book a Champions League final place, anyone?”

Do UK Students Know MLS Mascots | Who Are Ya?