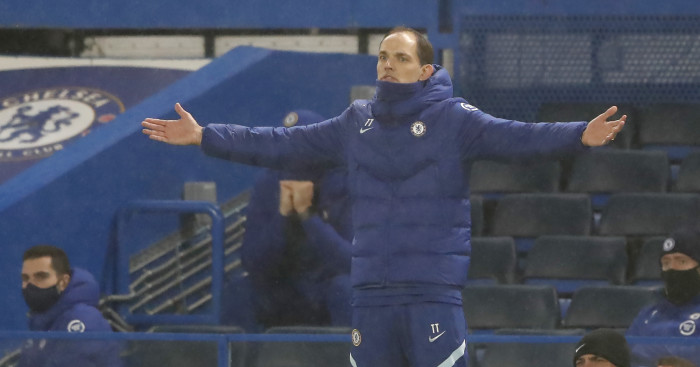 Faced with literally no choice but to make a snap judgement on Thomas Tuchel’s Chelsea tenure after one game and one training session – in the DARK for goodness’ sake – we can only conclude from a drab, damp goalless draw against Wolves that he will be an abject failure.

Sure, managers need time to impose their ideas and plans on a squad and that’s tough to do in the middle of any season, never mind this one. But when you shoot Bambi, you don’t get the luxury of time and this was not good.

There was a bright, almost ferocious, start in which Callum Hudson-Odoi and Ben Chilwell had some early joy in wing-back roles outside a narrow front three with Hakim Ziyech and Kai Havertz tucked in behind Olivier Giroud but when the ferocious early pace inevitably dropped, the pattern was soon established. Chelsea generally had the ball, and Wolves were generally happy to let them. So it continued until the last 15 minutes when the introductions of first Christian Pulisic and, later and more notably, Mason Mount gave Chelsea renewed if ultimately futile impetus.

Mount, inevitably, will be the story of the night. The decision to leave him out of a starting XI that leant heavily into experience meant Tuchel’s first game would always be judged – for good or ill – in relation to the absence of Lampard’s talisman.

There are so many caveats to apply to a first game in charge the day after being appointed, but Chelsea fans are entitled to raise a slightly concerned eyebrow at just how much this game resembled the worst of Sarriball.

There were positives there if you squinted hard enough. Hudson-Odoi was excellent on both flanks at various points, while Ziyech was decent enough.

But this was another Chelsea performance raising more questions than it answers. Kai Havertz remains a huge disappointment. Getting a tune out of his countryman will be one of Tuchel’s most significant tasks. They need to relocate some attacking threat from somewhere. This was really too easy for Wolves and is a plan plenty of other teams will be happy to follow over the months ahead. Three goals in six Premier League games is something that urgently needs addressing.

A first half that featured 466 Chelsea passes and no real clear-cut chance is a glib yet accurate summary of how the game panned out. The second opened up slightly more as things wore on and the rain came down, yet it was a rare Wolves break and a Pedro Neto shot scooped over Edouard Mendy and onto the top of the crossbar that actually came closest to breaking the deadlock.

This looked like what it was: a game between two mid-table sides slightly short of confidence and markedly short of ideas. Wolves’ simple plan – sit behind the ball and stay in it for as long as we possibly can – clearly worked out better than Chelsea’s attempts to simply pass the visitors to death.

You assume Chelsea will improve once Tuchel is able to get to work on the squad, but they really must. Bambi didn’t die for this.