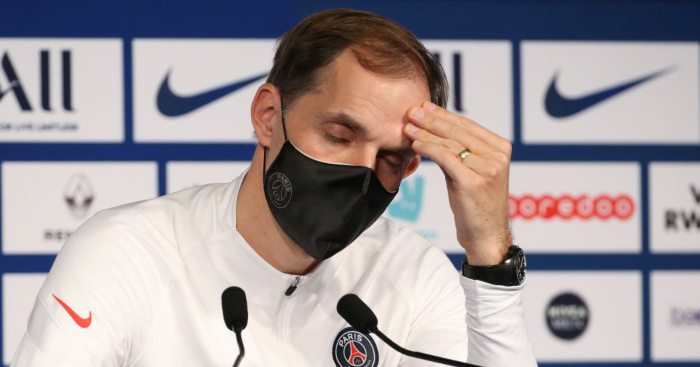 Thomas Tuchel would be interested in taking over at Premier League side Chelsea after losing his job at Paris Saint-Germain, according to reports.

The Blues lost 3-1 at the Emirates Stadium, their third consecutive Premier League away defeat, and Frank Lampard fumed after the game that his side had underperformed, especially in the first half.

They have a chance to rectify their insipid performance almost immediately as Aston Villa travel to Stamford Bridge on Monday evening but the pressure is building on Lampard with rumours of interest in the job from Tuchel.

Widespread reports have claimed that Tuchel will be replaced by former Tottenham boss Mauricio Pochettino at the Parc des Princes with the French club waiting to agree a severance package with the German boss.

Tuchel, who took over the reins in May 2018, led PSG to the Champions League final last term and a report has already linked him to both the Arsenal and Manchester United jobs.

And now Bild claims that Tuchel ‘won’t stay long in his Munich condominium’ with the former Borussia Dortmund boss set ‘to receive a severance payment’ of €6m.

Bild adds: ‘This means that Tuchel is free for a new club and could attack again in winter. The coach is eager for a new challenge. Maybe in England!’

They reckon Lampard ‘would shake’ if Aston Villa beat ‘troubled’ Chelsea on Monday night, with the role in west London ‘interesting’ Tuchel.

Tuchel ‘would like to work with’ Kai Havertz, Timo Werner and Antonio Rudiger, who all play for the German national team.