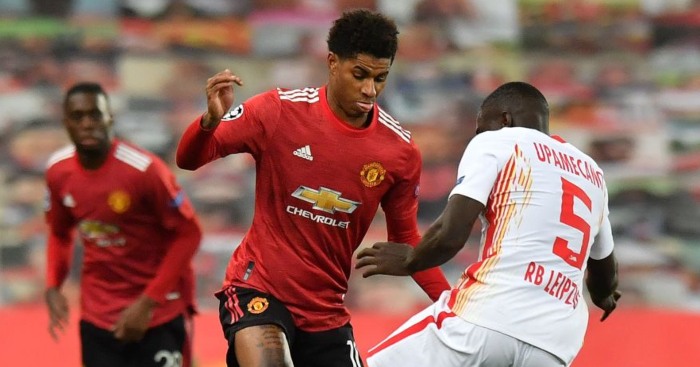 Ferdinand laid into Upemecano – linked with Manchester United and Liverpool – for his performance in United’s 5-0 win in midweek, sayingof hat-trick scorer Marcus Rashford: “He was head and shoulders above Leipzig. He made some defenders, who we were raving about before the game, look like schoolboys. I thought Upamecano had a nightmare today.”

But Thompson says he cannot be judged on one game alon: “I’ve seen he’s been linked with Liverpool as well as Man Utd now, and of course, after their result, you’d be wondering whether it’s the right call.

“Though on saying that, you could say the same thing about Virgil van Dijk if you had only ever seen him play in that game against Aston Villa.

“You have your off days – everyone does. RB Leipzig have had a fantastic start to their season, they didn’t look like that in the second half at Old Trafford, United were all over them.

“Upamecano was all over the place, but so was the entire team. But don’t be fooled. He’s a very good defender and there’ll be a lot of people looking at him because he is making a lot of waves.

“There’s not a lot of quality centre-backs available in Europe at the moment, and I know Rio Ferdinand wasn’t happy with his performance… But I think I remember Rio having one or two bad games himself!

“One or two shockers, it happens to everybody. He’s had a couple of shockers as a pundit, too, we’ve all seen the ‘give it to Ole!’ rant a million times.”