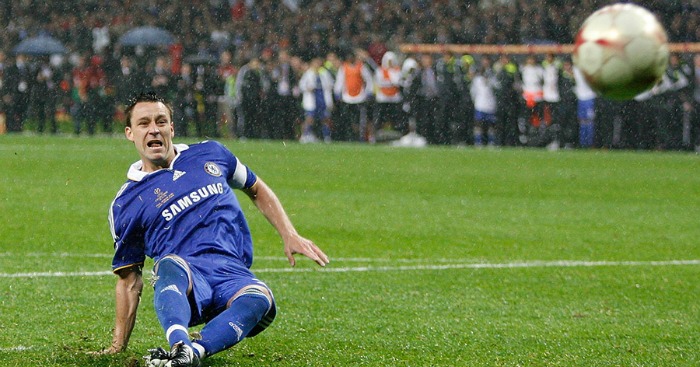 But then the penalty shootout came into existence, and the law suddenly got several pages long, and longer every year. We had a boatload of revisions in 2016, a few more in 2017, and can expect more as technicalities continue to arise. And that’s not even counting the proposed ABBA change.

First to note is that what we call penalty kicks in the shootout aren’t penalty kicks at all. They’re ‘Kicks From the Penalty Mark,’ so called to distinguish them from penalties during the match. So if a future Bob Bradley-type comes along and says the match may go to PK’s, you can disdain him not only for the Americanism but for the inaccuracy. (A special prize to the first person finding a commentator who regularly uses the proper phrase in its entirety.)

If you’ve ever wondered how the ref decides at which end of the pitch to take the KFPM’s, well, FIFA have wondered too. Up until 2016 it was completely at the referee’s discretion. Perhaps wondering if the referee’s discretion might have been, I don’t know, influenced by external factors maybe, last year it was changed to a coin toss. But the ref retains discretion in case of ‘other considerations,’ such as safety and ground conditions.

Now for something I’m sure you know, but I’m highly ashamed to say I didn’t. You don’t have to inform the ref of who will take the kicks or the order in which they’ll take them. It was only in 2016 that the law made this explicit, but the official commentary on the new text says it’s merely a clarification, not a change. I seem to remember a long time ago managers submitted a list to the ref—was it ever mandatory? If so, when did it change? (My googling skills have come up empty.)

And here’s a small-scale shocker. We know that when everyone on both teams has taken a penalty and the match still isn’t decided, you go back to the beginning and everyone takes again. But did you know that the second time through, the players can take in a different order, and you don’t have to inform the ref then either? That’s an explicit change courtesy of the year 2016.

But there is one case where you do have to inform the ref. That’s if before or during the shootout you find yourself with more players on the pitch than your opponent. Since both teams have to have the same number of players in the shootout, you have to tell the ref which one(s) you’re leaving out.

Which leads us to one of the all-time obscure provisions, once more added in 2016 and clarified in 2017. It was already the law for KFPM’s that you couldn’t replace an injured keeper unless you had a substitute remaining. But now if you have the numerical advantage and you’ve told the ref which player you’re leaving out, and your goalkeeper gets injured either before or during the shootout, the goalkeeper can be replaced by the player you’ve excluded and that player can participate in the shootout. If Tim Sherwood knows this one, there’s every reason to be afraid of him.

A shootout always has one keeper between the sticks and the other waiting nearby. You’ve undoubtedly noticed the idle goalkeeper standing to the side. It turns out he has to stand in a specific spot—on the field of play, on the goal line where it meets the boundary line of the penalty area, but not inside the penalty area. An excellent provision, because it keeps the keeper nearby but prevents him from choosing a place to stand that might affect the players in the shootout.

Penalty kicks during the match that are parried or rebound off the post are still in play. But you need separate rules for KFPM’s, because there’s no play for them to be in. Remarkably, it wasn’t until last year that the law was fully clarified. A shootout kick ends when the ball stops moving, goes out of play, or an infraction is detected by the referee. There have been occasional controversies on this matter in the past, the most famous being the shootout which decided the celebrated France-Brazil match at the 1986 World Cup.

Watch the whole shootout anyway, because it’s wonderful. The key moment for the law comes when Bruno Bellone, taking third for France, shoots to the right, and Brazil keeper Carlos dives the correct way. The ball hits the post, rebounds off Carlos, and goes in. The ref allows the goal. On this particular clip, you can hear the French commentators undecided whether the goal should count, noting also that the Brazilian players are protesting. The law at the time was unclear, and after the match FIFA said that referees had been operating under instructions to allow a goal under those circumstances. True? Not true? In any case they’re still amending the law.

One last provision which shows how hard it is to get the shootout laws right, and you may have to strap in for this one. The law has always said that besides the keepers and the current penalty taker, eligible players have to stay within the centre circle. But there’s yet another 2016 addition, as follows:

‘Kicks from the penalty mark must not be delayed for a player who leaves the field of play. The player’s kick will be “forfeited” (not scored) if the player does not return in time to take a kick.’

Let’s try to unpack this. If a player approaching the area to take the next kick swerves and goes to the touchline, the shootout can’t be delayed. So I assume the ref would order the kicking team to send another player from the centre circle. But since the kickers can take in any order, ‘in time to take a kick’ can only come into play if every other player for the side has taken. So it looks like the player who left can come back any time before the last kick.

The official explanation for the change is quite remarkable:

‘Clarifies that the referee must not delay KFPM if a player leaves the field of play; if the player is not back in time the kick is missed (forfeited). It is important to stop this potentially unfair conduct (instructions from the coach, deliberate delay, match fixing etc.).’

Wow. Clearly the idea is that a player can’t go talk to his manager, or perhaps more importantly, his paymasters. But remember the provision in the law ‘in time to take a kick.’ Since the order of kickers can be changed at any time, why can’t a player go over to the touchline, get his instructions, come right back and take the next kick?

In fact, any member of the team can leave the centre circle and go to the touchline for instructions, then come right back. Presumably they’d be cautioned, which is the standard sanction for leaving the field without the ref’s permission. But if they’re not on a yellow already, there’s no real cost. And even if they’re on a yellow, and get sent off, that only changes the numbers. Pick your worst penalty shooter to carry the message, and you’ve got it made.

The only possible conclusion is that KFPM’s, as simple as they look, are a right mess, and that the rule-makers aren’t much better than the rest of us in figuring out how to handle them. And talking about a mess, we come to…

Law 11—Offside. Having gone through such heavy weather on the shootout, I won’t subject you to any more today. We’ll leave the intricacies for next time. But a few preliminary comments:

The principle of offside is fairly simple, and can be stated in relatively few words. Offside is called when 1) the player is physically in an offside position; 2) the team gains what is viewed as an unfair advantage by having the player in that position. Number 1) can be completely nailed down with precise descriptions.  But number 2) can’t. With a law like this, you have two choices: you can go with a very general statement and let the referees figure it out on the field of play, or you can try to explain it and cover as many specific possibilities as you can.

The first method allows for more flexibility, but leads to inconsistency. The second method gives you more consistency, but is inevitably unstable and incomplete, and therefore frustrating, because words have their limitations, and you can’t cover all the possibilities.

For many years FIFA followed the first method. There were some illustrative diagrams to help out, but a few general statements seemed to suffice. But in recent years they’ve moved toward the second method: the law has become longer and some tricky words have been added.

Are we any happier? That’s for each of us to decide. We’ll wade into the swamp next week.