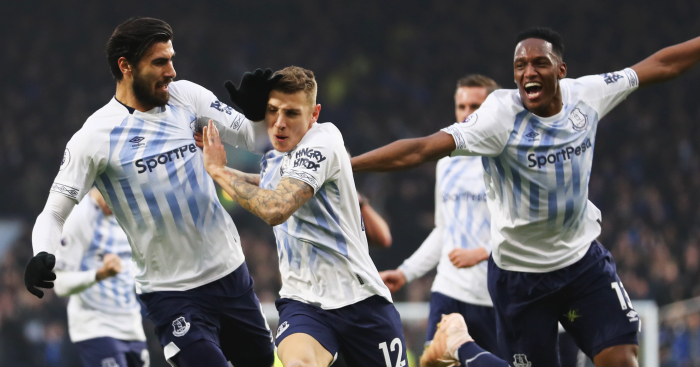 It’s a special Team of the Midweek, but since there’ll be another next week, maybe it’s not so special. Either way, it’s Foxes fans’ turn to get mad at me, because although a team in blue placed three players on the list, there are none from Leicester City. I watched the video over carefully, and it was an unusual team performance: no-one stood out, and everyone struggled at one point or another, yet there was always a teammate ready to step in. Let’s make them all honorary members this week, then. It’s a 4-3-3:

Goalkeeper: Lukasz Fabianski (West Ham United)
An easy choice, with a rousing second-half performance against Southampton. First came an amazing double save from Nathan Redmond and Oriol Romeu, most unluckily ending in an own goal that actually went in off Redmond’s arm. Then he denied Stuart Armstrong with a dive to the left, and a bit later Mario Lemina with one to the right. He also twice came off his line to claim convincingly. Felipe Anderson quite naturally gets the headlines, but Fabianski was crucial as well.

I’m an Adrián fan (remember him?), but the Poland international has been a brilliant acquisition, ridiculously cheap at £7m. Elsewhere, Mat Ryan’s overall shot-stopping numbers are down from last year’s, but he boosted them with two excellent first-half saves against Arsenal.

Right-back: Kyle Walker-Peters (Tottenham Hotspur)
So where have you been hiding? A fine first-half attacking show, certainly equal to anything Kieran Trippier or Serge Aurier might have given. Bournemouth seemed a bit frozen in defence, but he took advantage as if he did it every week. Showed no fear whatsoever, notching two well-deserved assists and one freebie. To be honest, he didn’t always look comfortable in defence, but we’ll pass over that for now. In a week without a standout, the best of the lot.

And yes, that includes Ricardo Pereira, who scored a goal that will pass into Leicester legend, but whose defending was less than confident, particularly in the first half. No comparison at all with his brilliant performances against Watford and Chelsea. A glorious strike, though, wasn’t it? Elsewhere, Erik Durm had a solid match at wing-back for Huddersfield, with little chance to make an impact. Michail Antonio, as is his wont, was alternately scintillating and cringeworthy.

Centre-half: Shane Duffy (Brighton & Hove Albion)
He started slowly against Arsenal, once or twice allowing a little too much space to attackers. But he got stronger as the game progressed, and in the second half he was excellent, not only making plays but leading the defence in the absence of Lewis Dunk. This wasn’t his usual look-out-below performance, either: instead of racking up the clearances, he marked and covered with similar confidence. (Had a few nice clearances too.)

Centre-half: Yerry Mina (Everton)
Right now Mina’s teammates are teaching him how to say ‘Can we play you every week?’. Burnley were just the ticket for the big Colombian, who won 13 out of 18 aerial duels, an excellent 72% on the day. But I was shocked to find out that his season percentage had been barely over 50%, very poor for a defender. Watching him closely, his judgement on where a long ball will land isn’t always exact. In any case he was unchallenged in the box in the second minute, when he buried a trademark header. Unfortunately, no matter how well he plays, I want to add ‘Murray’ or ‘Harker’ to his name and put him in a Dracula XI. Others on the side would be Jonathan Hogg, Lucy Bronze, Vlad Chiriches, Chris Morris and Quincy Owusu-Abeyie. Of course they’d play for Whitby Town.

For the first hour Christopher Schindler was on his way to his best match of the season, picking exactly the right times to step forward and challenge, doing equally well marking and staying put. But he was easily beaten by Juan Mata on United’s crucial second goal, and afterwards contributed fairly little. In another week he might have slipped in on the one big mistake rule, but Mina’s goal was the decider.

Elsewhere, Wes Morgan and Harry Maguire had some very good moments against Man City. At the same time, both had times where the marking needed to be tighter, and both might have done better on the City goal. But both were also instrumental in the big win.

Left-back: Lucas Digne (Everton)
Earlier this year I wondered if Digne lacked the pace to be a big success in the Premier League. It’s not the stupidest thing I’ve ever put on the internet (that would be ‘Yaya Touré is not an attacking player’ back in 2006), but his Everton career has just started, so give it time. He knows when to get forward, his positioning is good and he’s a very precise tackler. He’s also one of the best crossers in the league, and always combines well with the winger on his side. And, as you may have noticed against Burnley, he can score from long range. A very worthy successor to Leighton Baines.

Now let’s go to Selhurst Park. You’re playing Crystal Palace, and you’ve boldly decided to man-mark one of their players. Is it A) Wilfried Zaha, B) Wilfried Zaha, C) Wilfried Zaha, or D) James McArthur? If you answered D), you are Neil Warnock. In one of the more bizarre sights of the season, Joe Bennett consistently tracked McArthur coming off the right wing, to the point where he was more defensive midfielder than left-back. P.S. He was fantastic. P.P.S. When McArthur moved to the middle and Andros Townsend took his wing spot, Bennett was then asked to track Townsend, with a little less success. But overall a most memorable wacko performance.

Elsewhere, Aaron Cresswell was excellent for West Ham, and like Bennett might have walked into the spot any other week. He was consistent in defence and delivered several superb crosses. Andrew Robertson was his usual effective self as Liverpool dismantled Newcastle. Finally, for the second straight week, Bernardo (Brighton) – not to be confused with Bernardo Silva (Man City), Bernard (Everton) or Bernardo (the character in West Side Story) – showed that although he’s still raw, he’s one to watch.

Defensive midfielder: Dale Stephens (Brighton & Hove Albion)
He wouldn’t stand out on a football pitch if he were the only one there. His mother might not even recognise him. But he’s one of the best deep-lying passers in the league, and was at his very best against Arsenal. With effortless sprays to the wing or threads through the middle, he started any number of attacks as the Seagulls nearly scavenged the Gunners. Was also solid in defence, best when covering in the box on his side of the pitch.

Elsewhere, both Oriol Romeu and Declan Rice played very well in the Thursday evening encounter. It’ll be interesting to see how Ralph Hasenhüttl handles the Romeu/Højbjerg/Lemina trio. Right now Lemina looks to be last in the queue, although I think he has the greatest upside potential. If Romeu’s attitude is right, he can be both destroyer and passer, and that’s what he looked like against West Ham. Rice gets more comfortable in the spot each week, and I rated this his best performance yet: tactically aware, using the ball intelligently, particularly in the first half. Finally, Jordan Henderson may no longer be a certain starter at Anfield, but he’s playing pretty well these days.

Central Midfielder: Paul Pogba (Manchester United)
For what it’s worth, I thought he had a stronger overall match against Cardiff. Huddersfield were defending quite a sight better. But a brace is a brace, and a pretty special brace it was, sealing the match. He also most impressively won the ball tracking back in the 87th minute – so I won’t mention how he was outjumped by Steve Mounié for Huddersfield’s goal. (Oops…) But at least he had the decency to be upset about it. Query: was the goal celebration a deliberate homage to Eric Cantona, or simply a case of great minds boasting alike? Other query: what will his new penalty run-up be? Elsewhere, Cheikhou Kouyaté was excellent in the box-to-box role for Crystal Palace, although when he actually got into the box, he failed to convert two very good chances.

Attacking Midfielder: Stuart Armstrong (Southampton)
I don’t think the rest of the league yet knows exactly how good he is. An awesome display against West Ham, dominated by what he does best: getting the ball forward. And what he does second best: combining with teammates. Always thinking ahead, with nary a wasted motion. Don’t laugh, but I’m guessing the Brendan Rodgers influence at Celtic has made a big difference. Hasenhüttl has given him a creative role in the 3-4-2-1, and he looks like he’s been there all his life. Thwarted by one of Fabianski’s classics. A very good footballer indeed.

Winger: Felipe Anderson (West Ham United)
By now we all know what he can do – but did we know he could take charge like that? With the side unexpectedly trailing, and so many of his mates missing through injury, he said ‘I got this’. Wham, bam, we’re ahead. Also created a great opportunity for Lucas Pérez and was denied a hat-trick twice by Alex McCarthy. Wasn’t there a guy who used to play for West Ham – Payot, Paret, something like that?

Winger: Bernard (Everton)
So far he’s performed only in fits and starts, but he started and fitted very well against Burnley. With Richarlison getting a break, he was Everton’s dynamo, running at and around the helpless Claret defenders. A lovely cross for Mina’s goal, and incisive passing worth at least one more assist. Some very good tackles as well. His best all-round performance for the Toffees.

There were lots of good winger showings. Son Heung-min picked up a brace, one stylish and one kind of amusing. Spurs did well enough early in the season without him, but he figures to be away in Asia for a month, and that’s too long. (The fixture list is favorable, though.) Jürgen Locadia scored a comedy goal of his own and got into dangerous positions both on the wing and in the middle, plus defended from the front. Marc Albrighton, who I confess I’ve consistently underrated, was my man of the match for Leicester: a wonderful goal, some useful passing, and some tenacious defence.

Striker: Eden Hazard (Chelsea)
For various reasons, other players in the league have been receiving more attention lately. But there should be absolutely no doubt: Eden Hazard is one of the greatest players of his generation. Right now he’s carrying the Chelsea attack, and if he’s not firing, nobody is. Against Watford he scored from open play, scored a penalty he won himself, and created three good chances his teammates couldn’t finish. He also provided movement, pace, one-touch passing and resilience under physical assault. The rest of the team was barely noticeable. Chelsea won.

Speaking of guys carrying their team, Wilfried Zaha was in action against Cardiff City. When an outstanding player is playing for a mid-table or lower club, you often hear ‘I’d love to see what he could do at a top side’. I’ll never say that about Zaha, for two reasons: 1) it’s never a good thing when a team loses its best player; 2) it’s amazing to watch him carry Palace. This was a truly extraordinary exhibition. Coming into the match he had averaged 56.4 touches a game – here he had 81. He created four very presentable chances for his teammates. He was robbed by a Neil Etheridge dive. He juggled six balls and seven plates while selling match programmes. But Palace never scored. I’d love to see what he could do…nope, won’t go there.