Home F365 Says Three into one doesn’t go: the punishing race for fourth 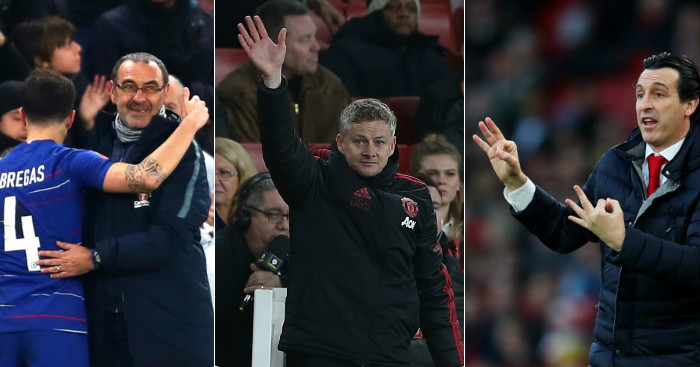 It’s suddenly getting very tight at the top. Well, I say the top. Not the very top of the top, a subject that has been amply covered elsewhere on these pages, but the bottom bit of the top, that bit between fourth and sixth.

Just a few weeks ago we would have been talking about the bit between third and fifth instead, but there we are. Three consecutive league wins have pushed Spurs into a weird hinterland of their own: the title contenders that many forget are in contention.

Meanwhile, you wouldn’t know it as they’re not typically a club that demands too much attention, but Manchester United have been really good – I think I heard someone say they’ve got a new manager or a new kitman or something – and as a result they have almost caught up to fourth-placed Chelsea and actually overtaken Arsenal.

In other words, where it looked at the turn of the year that there would be two Champions League spaces available between three sides (Spurs, Chelsea and Arsenal), it now looks like there will be one spot open to a different three (Chelsea, Arsenal and United).

The riches that qualification would bring have effectively turned the uppermost reaches of the Premier League into an early-19th century social ball: while from the perspective of literally everyone in the country it is the most overly-precious, unselfconsciously privileged thing in the world to moan about, it nevertheless brings a unique pressure upon those three managers henceforth known as “the Elizabeth Bennetts”.

Even during their impressive unbeaten start to the season, Maurizio Sarri always insisted Chelsea were more of a long-term project than they first appeared, an assessment that everyone can now get on board with. Unai Emery is sandwiched between a fraught corporate structure and an under-strength playing squad. Ole Gunnar Solskjaer’s impact has been startling enough that he now runs the risk – in the short term, at least – of becoming a victim of his own success like Jurgen Klopp and Mauricio Pochettino, with his competency having perhaps raised expectations beyond a level he is capable of delivering.

We may not have much sympathy for any of these high-status Elizabeth Bennetts if they fail, but it is inevitable that two of them will, and that may well end up coming down to which of them is able to cobble together the most effective short-term fix, rather than the other two necessarily doing anything wrong or taking their respective club in the wrong direction.

Any rational debate of the current title race (as if there could be such a thing given the current timbre of discussion in all spheres, including our sphere-related sphere) would accept that Liverpool and Manchester City have been two exceptionally good sides, that Tottenham have been bafflingly brilliant, and that whoever eventually takes the title, the race has been well run (thus far, at least). It’s just part of the game that not everybody gets to win.

Given that the three Elizabeth Bennetts in the challenge for fourth have all joined their clubs at genuine moments of transition, would it not be sensible to apply the same principle to them too?

That is not to say they won’t make mistakes that deserve criticism, but the fans and pundits most prone to fits of apoplexy and knee-jerk hyperbole would be well-advised (says I, the one giving the advice) to consider that even if all three Lizzies were to do their jobs perfectly between now and the end of the season, two of them would still fail to snare their Mr Darcy.

Steven Chicken is on Twitter and already regrets that extended Pride & Prejudice metaphor so no need to bring that up yeah?