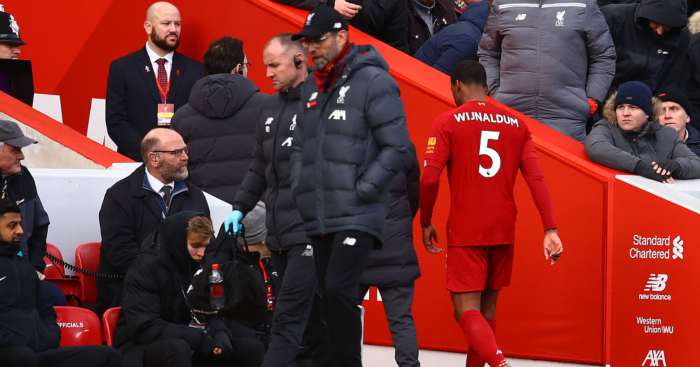 Liverpool midfielder Georginio Wijnaldum could leave at the end of the current season, according to reports.

The Netherlands international has started 19 of Liverpool‘s 20 Premier League matches as they have built a 13-point lead at the top of the table.

Wijnaldum has been a key member of Jurgen Klopp’s side since he swapped Newcastle United in the summer of 2016, helping Liverpool to Champions League glory last term.

The 29-year-old has now entered the final 18 months of his contract at Anfield and David Ornstein in The Athletic now claims that Wijnaldum could leave the club this summer.

There have been rumours of interest in Wijnaldum from Spain and Italy and the report claims there are three options available to the club and player.

‘Both parties are comfortable with the situation and potential scenarios: recommitting, leaving as a free agent in 2021, or departing at the end of this campaign if a suitable offer is submitted.

‘Liverpool would be happy with the first option and content with the second, given the value Wijnaldum has presented since arriving from Newcastle for £25 million in 2016.

‘The final option is the least conceivable as Liverpool do not want to lose the Dutchman and would demand a high fee.’