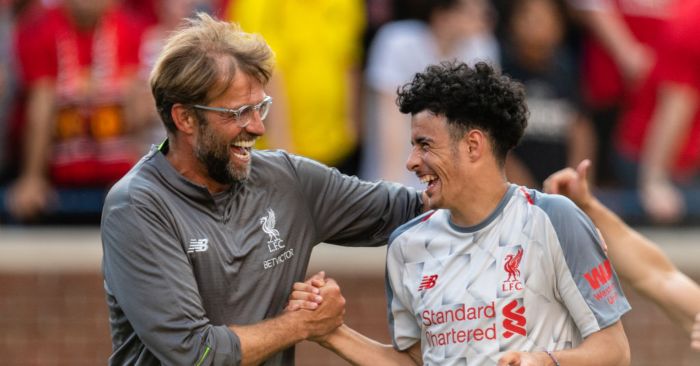 Who will host the Liverpool title-celebrating Zoom call? Will that Man Utd run-in work against them? Can Tottenham surprise us?

When and where will they win it?
With Old Trafford, Wembley and the literal moon all ruled out, the most pertinent question for Liverpool is a little more clear: where will they capture their first Premier League title? The options have been narrowed down to Anfield, Goodison Park, the Etihad, the Amex, the Emirates or St James’ Park, if indeed it is their result that confirms the inevitable. If not, those scenes at Jamie Vardy’s house four years ago could be replicated, only on Zoom with Dejan Lovren’s connection constantly breaking up, Andy Robertson insisting on trying to host the most hyperactive quiz ever and James Milner changing his background to plain white because he considers his grey wallpaper too garish.

Use this season as preparation for next?
Liverpool are almost in a unique and privileged position of having nothing tangible to play for in the remaining Premier League games. They require a maximum of six points to guarantee a first championship since 1990 and while Jurgen Klopp and Jordan Henderson will commit actual murder if anyone ever dares suggest the next game is not the most important, the Reds would be foolish to waste this opportunity. A delayed campaign means a stunted pre-season and therefore less time to prepare for 2020/21. Liverpool have earned an unprecedented chance to steal a few yards on everyone else by using their final fixtures to fine-tune everything, figure out who and what they need to improve and start their defence at an immediate advantage. Jamie Carragher was right.

Can youngsters break through?
The only thing supporters value more than winning the transfer window is the ability to gloat that they have more faith in young players than their rivals. Dave, 54, Sussex, divorced, does not actually care that Manchester United are playing Brandon Williams regularly, but he is happy to feign pride to wind up his Manchester City mates about Phil Foden.

Chelsea are an extreme example, appointing a literal rookie last season to parlay disappointment at their ban on signings into a wholesale revamp of their entire approach towards youth players. Liverpool’s reluctance to spend is already clear, thus their developing talents must become more than extra numbers in training-ground drills or seats on the bench. Curtis Jones and Harvey Elliott have 20 Premier League minutes between them this season. It cannot hurt to show the next Steven Gerrard and Sergio Ramos’s best mate that the first-team pathway really is clear to those good enough.

Will European promise finally translate into something proper?
As typical as it seems for Liverpool to take the scenic route towards a first Premier League title, Manchester City fans have been impatiently asking, ‘Are we there yet?’ on their many European road trips over the years. They have been knocked out of the Champions League group stage, last 16, quarter-finals and semi-finals, exiting at the hands of Borussia Dortmund, Barcelona, Real Madrid, Monaco, Liverpool and Tottenham. Victory from behind at the Bernabeu, combined with a reduced focus on the Premier League and the added incentive of properly sticking it to UEFA, could make this their best chance to lift the one trophy they need to complete their modern collection.

Can Pep Guardiola rediscover his joy of Big Six?
From his summer 2016 appointment to May 2019, Guardiola managed 30 Premier League games against Arsenal, Chelsea, Liverpool, Manchester United and Tottenham. He won 18 and lost just seven, earning ten more points than closest challengers Liverpool in an intra-league. This season alone, City have lost four of seven such games and sit fourth in a table based on those results, far below United, Chelsea and their relative managerial novices. Returning against Arsenal, visiting Chelsea a week later and hosting Liverpool at the start of July offers a few chances at retribution and redemption.

Has the break reinvigorated Kevin de Bruyne?
It is nice to know we are at that stage of De Bruyne’s career when one goal and four assists in seven Premier League games this calendar year represents something close to a slump. But the Belgian’s 2020 vision has only helped lay on two strikes in the January demolition of Aston Villa, as well as the winner against Sheffield United. A goal and an assist in his penultimate appearance at home to West Ham was the perfect prelude to heroics in Madrid. But his domestic output – if not the performances themselves – has cooled significantly. It is on Guardiola to help reduce the field of the league’s best players to one again.

Who will state their case strongest?
As Chelsea roll back the years to a time when they were that one player who always ruined Monopoly by purchasing the two brown properties and sticking 427 hotels on them, the cast currently residing at Stamford Bridge have an intriguing opportunity. Hakim Ziyech will arrive soon and is likely to be joined by Timo Werner, with Kai Havertz and Ben Chilwell among their other targets. Callum Hudson-Odoi, Christian Pulisic, Tammy Abraham and Marcos Alonso (how can he do more than this?) must underline their worth to Frank Lampard now while there is still space and time to do so.

Can they immediately justify the investment?
It is the footballing equivalent of being asked to make the bed your betrothed proceeds to enjoy with someone else. Those Chelsea players less certain of their future are obliged to help the Blues vindicate such spending by qualifying for the Champions League. A three-point gap to United is precarious and while City’s impending European ban could cast that safety net further, they need to ensure their seat at the top table if they’re already ordering from the most expensive menus.

Is this Ruben Loftus-Cheek’s time?
“I’m really excited to be back,” said Loftus-Cheek last month. The 24-year-old has somewhat missed the revolution, an Achilles injury forcing him to watch the first Chelsea manager of a generation with licence and time to develop homegrown talents from the sidelines. Lampard could be ideal for Loftus-Cheek in terms of coaching movement, timing and drive, but the midfielder has made two benches and nothing more under the club legend. With Gareth Southgate watching on eagerly, Loftus-Cheek could benefit more than most in the circumstances.

Can they accommodate Paul Pogba and Bruno Fernandes?
Despite the very best efforts of Neil Custis, Pogba remains a Manchester United player. Their relationship is at a delicate but intriguing stage, the player no longer burdened with the hopes of an entire institution and the club finally not solely reliant on one dominant character. The introduction of Fernandes to the equation could be the perfect antidote to a once toxic marriage. Make no mistake: Ole Gunnar Solskjaer will and should try to accommodate both.

Has their momentum gone?
It is not long since United looked aimless, rudderless and hopeless. They started 2020 with three 2-0 defeats in four Premier League games, the most chastening of which was Burnley’s cruise at Old Trafford. Throw in Manchester City’s League Cup semi-final first-leg mauling and Solskjaer and his players looked painfully out of their depth. But an 11-game unbeaten run, featuring 29 goals and nine clean sheets, suggested that the latest turned corner had finally not resulted in a dead-end. While there are plenty of reasons for optimism, how much of United’s form was dictated by the head of steam built up through congested fixtures? And can they pick up where they left off so easily?

Will their run-in work against them?
By some measures, United should be considered overwhelming favourites to qualify for the Champions League once more. They had form behind them and the most presentable opponents ahead. But the former is no longer relevant and the latter could work against them. Outside of games against Tottenham and Sheffield United in the first week and Leicester on the final day, United face the clubs in 11th, 14th, 15th, 16th, 18th, 19th and 20th. They have by far the fewest points of any top-half side against those in the bottom half. Fernandes has helped correct that somewhat, but there’s still a way to go.

Will injury returnees help turn the tide?
Few teams needed an impromptu three-month hiatus more than Tottenham. A run of six winless games incorporated setbacks in the Premier League and exits in both the Champions League and FA Cup. But their injury returns should reinvigorate them and, at the very least, remove one excuse from Jose Mourinho’s veritable smorgasbord of reasons he is not to blame. Harry Kane, Heung-min Son and Steven Bergwijn would improve any attack, never mind one spearheaded by Lucas Moura in its last game.

Can they keep control of their own fate?
Equally, few teams have as much to lose in their first game back as Tottenham. A draw at home to Manchester United would be unhelpful but not nearly as catastrophic as a defeat. Win, and that gap to fifth and potential Champions League qualification is immediately narrowed to just one point. The north Londoners have a couple more games with similarly high stakes against Sheffield United, Arsenal and Leicester thereafter. It is time for Mourinho to flex his tactical muscles, thrive as the underdog once more and earn that ruddy wage.

Might Tanguy Ndombele break through?
It has been a strange lockdown for Tottenham’s record signing. Liverpool, Barcelona and, most surprising of all, Mourinho have all come knocking for a midfielder who has redefined failure to live up to expectations. Ndombele was stumbling through his first season in England, starting 12 Premier League games and being subbed off in ten. It feels like three months off will have been either the best or worst possible scenario for him, with no middle ground.

What does their form count for now?
Whisper it ever so quietly but Arsenal are currently on the Premier League’s longest unbeaten run. While as many of those eight games have ended in draws as they have wins, it represents a resilience, determination and attitude hitherto unseen for some time at the Emirates. That will be tested instantly and probed mercilessly at the Etihad but if Arsenal can pass that test, they will be in an enviable position.

Can Mikel Arteta prove himself?
It has been an impressive start to managerial life for Arteta but one notable asterisk remains: United are the only top-half club he has beaten, and that was at their New Year’s Day low ebb. The last-gasp defeat to Chelsea and draw against the same side in similar circumstances offered hope that Arsenal can trade punches with heavyweights once more, but doubts will persist until they irrefutably prove their status. They travel to City, Wolves and Tottenham, hosting Leicester and Liverpool in between, in a schedule that could make or break them and their manager.

Will there be proof of life after Aubameyang?
He could easily stay, if not on an extended contract then until next summer when he leaves for nothing. But Arsenal will have to prove they can walk, talk, taste, touch and smell without the aid of Aubameyang first. He has 61 goals for the club since joining in January 2018 – five more than second-placed Alexandre Lacazette (36) and joint-third Aaron Ramsey (10) and Gabriel Martinelli (10) in that time combined. That sort of reliance on one scorer is not healthy. Nicolas Pepe and Mesut Ozil need to step up, while Eddie Nketiah has been a surprisingly good little earner.