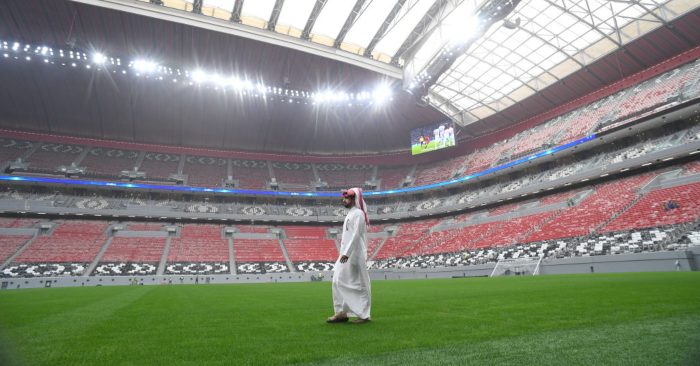 Ah, December 18. You know the vibe. Trying to tie the last few bows on a pre-Christmas work schedule, figuring out a Secret Santa for someone you barely recognise, being asked by your dad if you’d help him hang a few icicles on the bush outside the door which your mum has left out, and replying… “sorry Dad, can’t, I’m watching the World Cup final.”

Yes, that’s the next World Cup final you will be watching. Or might be.

I won’t be. I’ve decided to exercise the Meatloaf clause on this particular iteration of football – I’d do anything for it, but I won’t do that. There’s obviously a line for all of us. Would you have watched the 36’ Berlin Olympics, just because, you know, ‘the Olympics’?

It’s of course an extreme comparison to make, but we shouldn’t get too carried away with how extreme it actually is.  Two repressive regimes where arguing over ‘how to run this country’ lands you in quite hot water, who both believe equality only goes as far as it goes, especially when it comes to ‘labour’ and who, it appears, see sport as a very, very good thing, when it comes to putting on a show.

The Cato Freedom Index currently has Qatar at an unenviable 103rd out of 162 countries, the lowest (but one) of any nation to host a World Cup. That one? The last World Cup. Don’t ever say FIFA isn’t making progress! But on a continuum that eventually ends at the Berlin Olympics, the Qatar World Cup does not belong to a different universe.

So in terms of what football can’t make me do, here we are: November 21-December 18 2022. I had to double-check the dates; and you can imagine what typing ‘Qatar World Cup’ and then the letter ‘D’ into Google throws up as its first option.

I’ve got a friend who works in fire safety for construction projects in Qatar, and has periodically worked on stadiums. “You can’t believe what you’re seeing,” he told me. Why not? To paraphrase: because it’s just nothing, desert-desert-desert, and then, from nowhere, the exoskeleton of a 60,000-seater stadium.  It would be the equivalent of Chizzlewell-under-Moreby, or any other two-houses-and-a-postbox English place, also having the Emirates Stadium. In an oven.

Yes – the oven. That infernal oven! Easy to overlook, in the first place; we all have our blind spots. Though, as a purist, I preferred the original proposition. To quote Construction Manager Magazine, as is always a pleasure: ‘It’s worth revising why Qatar is so confident, and how it impressed the FIFA delegation in the first place [STOP SNIGGERING AT THE BACK] with its plans to deploy clever engineering and the magic of phase-change materials to keep fans and players cool.’

By ‘phase-change materials’, I assume they mean changing the phase of the Arabian desert in summer to one of a gentle, football-friendly climate. On this, suffice to say, the desert wasn’t willing to play ball. Instead, of course – and we should have seen this coming, in terms of the flexibility of FIFA – it turns out the World Cup isn’t necessarily a summer event. That was, in fact, always dependent on circumstances.

There was the inevitable whinge from the Premier League about the harm to our beloved Xmas schedule, including Richard Scudamore having to suffer the indignity of going from ‘extremely disappointed by’ to ‘resigned to’ a winter World Cup in the space of a few short months, and more muted protestations from Europe’s other leagues, given that they have less bonanza-cash riding on that period.

Apart from, notably, the US, where the other kind of football being in full swing is likely to eviscerate their World Cup audience, precisely when they’d just bet the TV rights farm on getting big ones. Google is noticeably dark [STOP SNIGGERING AT THE BACK] on more recent reports describing American TV networks’ attitudes to having the rug pulled out from under them by the adjusted schedule, but if you wind the clock back a few years, the general attitude was ‘I’ll be watching other things’.

But, fair’s fair. The sharp-eyed will again have spotted that the World Cup isn’t going to actually mess with the post-Xmas schedule, because it finishes a whole week before. As you could imagine, there could be little more beneficial to a professional footballer’s physical and mental state than touching down at Heathrow, getting a full afternoon/evening to relax and unwind from the toll a World Cup in Qatar will likely take, before starting the pre-game work for Burnley away the next day.

Of course that won’t happen. In honour of the most synthetic World Cup human hands could design, where every visible element of it is a token gesture, the traditional dates fall into place. The clutch of games up to the New Year will be your club’s Did Badly At The World Cup/Who’s That XI, so there’s that to look forward to. Better hope it’s not crunch-time! Although why, it’s worth asking, should the Premier League be so special that it doesn’t occasionally get disfigured by the needs of international football? But more on that later.

First, let’s imagine the branded-like-cattle, very 21st century hellscape that Qatar 2022 will be. When it comes to the lifeblood of a high-class football game – a nice spread of gleaming grass to play on – fear not, for as per the Economist, ‘a state-run laboratory is experimenting with grasses flown in from around the world to find one best suited to Qatar’s desert climate’.

So step with me in our shared imagination, into one of the dedicated, softly-swooshing, purpose-built trams to transport us from ‘gleaming skyscraper place’ to ‘gleaming nowhere-stadium’. Replete with wraparound screens showing us the recent exploits of Angel di Maria, Neymar and Kylian Mbappe, interspersed with Fans Having FIFA-Approved Fun.

When, you wonder, will the first ‘difficult’ photo be shown – probably best get it in early. Don’t look at the dudes who plod past you into the last trams of the day, armed with brooms. They Are Not Important. Look ahead, into the distance and towards that stadium. Vast, gleaming, as palpably devoid of atmosphere as anywhere where nothing of meaning has ever happened would be. You go to the Maracana, the San Siro, the Mestalla, you feel its ghosts, they give you shivers. I mean, you can feel the ghosts at this stadium if you want, but they’re a very different sort.

Before going in, you must – must – take at least a half-hour in the dedicated Fan Experience Zone. This is where the fun happens, and could you please take a picture of yourself having it, send it to that 5-digit number on the big screen, and it will shortly appear on the <3 Qatar 22 Instagram page.

Have a beer! Have two!

In the stadium, after the Let’s Get Loud For The Playing Teams on the perfectly tuned audio-system has faded, don your pricey-feeling nation-affiliated t-shirt, stored under your comfortably padded seat, and enjoy that atmosphere. The broader significance can go do one. Drink It In.

So yeah. Yours if you want it. If the Nepali government’s record of ONE THOUSAND FOUR HUNDRED AND TWENTY SIX poor, dead, basically anonymous workers in Qatar during the decade up until 2019; if the utter nonsense of a winter World Cup just because We Have To Please Qatar; if all this is but a side salad to you, next to the football, then my dude: you deserve this World Cup.

Should the Premier League take any kind of stand? But how could it – of a moral sort, I mean. Where is its leg to stand on? Tied up with those charming rainbow laces perhaps, the most powerful statement of intent since the raised black fists of John Carlos and Tommy Smith. It took, in the end, the only stand it has the authority to make – “you will not mess with our commercial interests” – and didn’t even try particularly hard with that. Bigger fish to fry, etc.

We make the future we deserve; it’s slightly terrifying to think we have that much power. But ultimately FIFA needs you more than you need FIFA. You are all it has. Just go have a mince pie or something, pretend it isn’t happening, and you’ll be wielding the kind of influence we can usually only dream of.