“He is about motivational speeches and all that, when he talks everybody listens.” 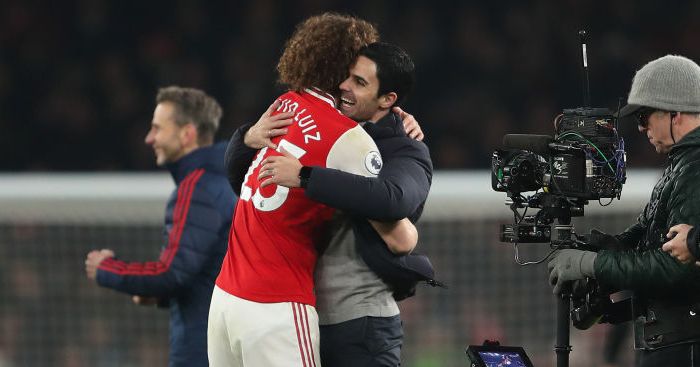 Kieran Tierney has singled out “proper leader” David Luiz for helping to steer Arsenal out of their poor form earlier in the season.

The Gunners looked destined for a campaign to forget when Unai Emery was sacked in December following a run of one win from nine games in all competitions.

Emery was replaced by Mikel Arteta and, despite only managing to finish eighth in the Premier League, the Spaniard delivered the FA Cup less than eight months into his reign.

During that time Arteta kept faith in Luiz despite a number of high-profile errors, culminating in an evening to forget at Manchester City where he was subbed on, made an error for a goal, conceded a penalty and was sent off all in the space of 25 minutes.

A lot of Arsenal fans were then up in arms when the 33-year-old signed a new one-year contract just days later.

But Tierney, who signed for Arsenal on August 8, 2019 – the same day as Luiz – was full of praise for the former Chelsea man’s influence in the Emirates Stadium dressing room.

“He is a legend, the biggest legend ever and I love him,” Tierney told the Open Goal Podcast.

“He is so good with all the young boys, everybody loves him. He is a proper leader, even if he hasn’t got the armband he still leads.

“I signed the same day as David Luiz. He is a winner, a born winner. He was saying to me during the season when we were doing bad ‘we are going to win silverware this season, believe me’.

“He is about motivational speeches and all that, when he talks everybody listens.”

Tierney also revealed that Luiz was keen to take the pressure off his shoulders as he looked to establish himself in the Arsenal side, having been injured when he joined from Celtic.

“He said to me one game when I hadn’t had my best game,” added Tierney.

“We drew, we should have been wining as it was a home game, he was like ‘don’t worry, I’m the big name and I will take the pressure’.

“I was just sitting there, one of my first games it all went wrong, the fans were on us and we weren’t doing well.

“He just went: ‘don’t worry about it, you just keep playing your football and I will take the heat’.”

Tierney made the move south having come through the ranks at Celtic, where he went on to win four league titles in a row.

But the 23-year-old is left with regret over how his departure from the club he supports was received by fans.

“The interest (from Arsenal) was there from the start of the window,” he said.

“I wasn’t pressuring my agent to make it happen. In the end they just all agreed they (Celtic) were getting £25million for a player who cost them nothing.

“It was just sad the way it ended, seeing people turning.

“The weeks before I had seen that Arsenal had had bids and people were saying ‘you’re a rat if you go here’, ‘you’re never a Celtic fan’ and it was breaking my heart reading it.

“I had thousands (of messages). Tweets with threats, spray paint on the walls saying ‘Judas’ and all sorts.”