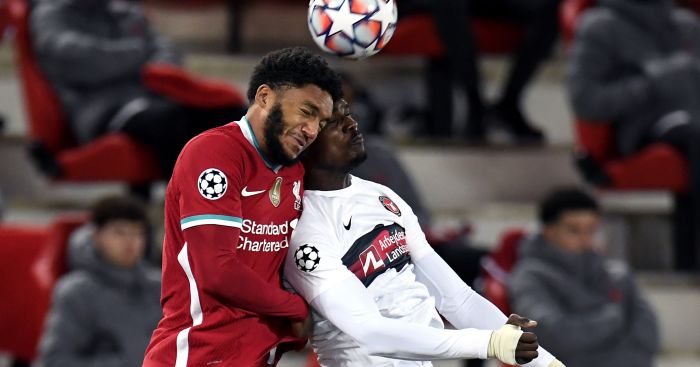 Gomez is the key

After a string of angry rants (and the odd C-bomb) in previous mails, I thought I’d have a go at getting an actual football mail published. It’ll never catch on.

First, that was bloody dire from the mighty reds last night. Got away with it against a spirited and organised opposition, who with even slightly sharper attacking teeth could have hurt and humbled us in that first half.

Moving swiftly on, I’d like to focus on the importance of Joe Gomez to Liverpool this season. One of the few positives last night was the way he shepherded young Rhys Williams through his impressive performance. Fabinho has rightly been receiving plaudits for his recent stint at centre half, and I have everything crossed his hamstring is intact with only the slightest of strains, but it is Joe who I feel will have more influence on our defensive displays as the season develops.

On his young shoulders it lies to communicate with the exemplary Allison Becker and take on the role of marshalling the defence, no matter his central defensive partner. Virgil’s shoes are big to fill, both literally and metaphorically.

With challenges such as these, reputations are forged. Time to step up.
Spoons LFC (minding my p’s & q’s)

I am pretty sure I’ve written in to express this at the start of the past two seasons but Liverpool look really poo for the most part. On balance a draw or loss wouldn’t have been unfair.

We need to talk about Minamino. When we first signed him for £8.47 and a packet of crisps everyone felt it was undoubtedly magnificent transfer dealing from Michael Edwards but in truth he’s starting to feel a little bit disappointing. The main issue is that he’s trying too hard to do something exceptional when I feel he should probably just focus on doing the basics well. I felt bad for him because he played next to Origi who also looked quite pants and it’s probably hard to develop chemistry with someone you’ve barely played competitive football with.

On the plus side you watch Shaq on a day like this and it leaves you wondering why he doesn’t get more game time. Thought he was really good tonight and the pass for the goal was pretty sexy. Trent became himself again tonight for the first time in ages too.

Fabinho’s injury…let’s just hope that was precautionary. I found myself wondering how many more people need to get injured before I start to miss Lovren. There’s a long way to go.
Minty, LFC

Clearly Liverpool are going to expect somebody to apologize for Fabinho’s injury. Isn’t that how it works ? So I will. I will take it. Get it out the way.

But I didn’t mean it.  I’m not that kind of player.
Johnno (all teams get injuries but this means more)

I’m reading loads of different reasons from the utd fans for their poor results. I’ve read midfield is the issue, fullbacks and of course the cbs get a bashing as well (all rightly so). I believe it’s systemic as Utd seem to do well against big teams and not so much everyone else. Let me tell you why.

Against PSG United played a hell of a lot deeper also against Chelsea. Which suits your CB and goalkeeper’s style. De Gea is not a sweeper keeper and Maguire and Lindelof are tragic at 1vs1 defending. This is why when you play so called inferior teams who sit back and bring you on to them you can bet your ass there’s going to be a comical counter attack with Maguire or Lindelof or both making a clown of themselves on the halfway line or while trying to get back.

With a goalkeeper who is glued to his line it’s easy pickings. So basically United do to big teams what their lesser counterparts do to them. Hence why people where waxing lyrical about Tuanzebe performance because it’s the first time in a long time where a United defender won his duals 1vs1.

Another simple way to beat United is raise the tempo. United are fast in a counter, sort of one pass stuff to one of their fliers, but if an opponent rushes your midfield and defenders when they’re in possession and the opponents keep that up for a prolonged period during the game utd are beat as they just can’t cope. Whether that’s work ethic or laziness, I don’t know, but what I do know is push the tempo on United and they’ll fold like a cheap suit.

Rio met Trent and Robbo recently and they said if there’s a three vs three against them that’s a green light to bomb as they back the Liverpool back three ( 2 cbs and a holder cm) to win their battles. Do you think Luke Shaw and that silky devil AWB have the same confidence?

So by my calculations Utd are scuppered until they either get a dominant cb who is good 1vs1 or they sit back against everyone.
John

It could be far worse for Man Utd. They could be run by the goons in charge of Barcelona.

It’s actually impressive how often the cartel from Catalunya gets it wrong – the club is now a punchline. A force 12 farce on the Grayling scale.

Perhaps they have board members shorting the club? It wouldn’t be that odd for a club that allegedly hired a company to maul its own players on social media.

Now we all know Barca’s record on transfers – the hundreds of millions squandered, the intermediaries with their hands in the till – but this year is perhaps the nadir.

Inexplicably selling Messi’s bezzie – and reliable goalscorer – Luis Suarez to a rival shows they learnt nothing letting David Villa go on to win the title at Atletico. Naturally they kept Griezmann who just looks completely the wrong fit for the team and they spent much of the Summer woodwarding a bid for Memphis Depay. Hmmm.

Placeholder manager Ronald Lorem Ipsum Koeman has wandered into a situation where he has half a team of number 10s and very little in terms of trusted attacking outlets, and we know how that worked out at Everton.

They look as bad on the pitch as you would expect. Barca don’t really do tiki-taka these days and seem unable to stop other teams waltzing through their classy-on-paper but error-prone defence, as proven in last weekend’s Classico defeat against a rickety Real Madrid. The young players look good, but that’s really the only positive.

I’m not a Barca fan, so all this chaos – especially as it opens up La Liga to the likes of Real Sociedad – would be quite entertaining, but for one thing.

I think this is it for Messi.

Barcelona have wasted the greatest player of our generation. Perhaps they should have sold him. He’s now simply a great player in an unspectacular team, in company with the Kanes, Neymars and KDBs. He may not be the talisman of old but short of transmogrifying into two Virgil Van Dijks or dipping both Pique and Busquets in the fountain of eternal youth, there’s very little the Argentinian can do, although he did fill in at full back a couple of times at the weekend. Even 2018-19 level performances – his last truly great season – probably wouldn’t be enough.

Maybe we’ll see this week in the Champs League if he was just longing for the competition of Cristiano Ronaldo, the Nadal to his Federer.

Anyway the truth is that Barca don’t look good enough to compete for La Liga, let alone the Champions League. The players are constantly bickering at the board. This season again it’s a show about nothing. No hugging, no learning.

Messi’s decline was always going to happen, it’s just a shame it had to end this way.
Quarantino Asprilla, Chairman of the Bored, ITFC
PS: John Wark aside, has there ever been a more influential player in the history of football – for good or bad – than Sergio Ramos? Huge goals in both the League and Champions League. For a defender he always seems to find a way to be decisive. Madrid always seems to look completely lost when he doesn’t play.

Liverpool are falling apart with injuries, Man City look to have taken a step back and no one is showing any consistency.

Just makes it all the more annoying that the United board didn’t push the boat out for that centre back, Matic replacement and winger we so desperately needed – the league is wide open and we’re not equipped to take advantage…
James (please God let Tuanzebe stay fit for a full season), MUFC

Another fantastic question put to the Mailbox, this time by Kevin about players who did great things in their 30s similar to Zlatan, well here are a few off the top of my head:

Brad Friedel – Retired age 44, was still putting in top performances in his 40s, let alone 30s, he might be 49 now but I would still feel confident having him as a third choice goalkeeper nowadays.

Francesco Totti – Played till he was 40 for AS Roma, his last double digit goal scoring season was 2012/13, when he was 36, after that he hit 8 goals in consecutive seasons, then 5 and 2 in his final two seasons.

Luca Toni – Italian forwards and scoring goals in their 30s is a common theme isnt it? At age 36 and 37 he would score 20 and 22 goals for Hellas Verona and also win the Serie Golden Boot.

Arjen Robben – He was not as prolific but his contribution to Bayern in his 30s was outstanding, you still fear his left foot now.

Franck Ribery – Him and Robben were incredible together, both in their 30s and still ripping teams apart, he now scares defenders in the Serie A for Fiorentina, is he any good at age 37? you bet he is.

Jermain Defoe – 38 years old and still scored 13 last season for Rangers, 8 the season prior and when 33 years old scored 15 for a dreadful Sunderland side in back to back seasons.
Mikey, CFC

For the surprising hat-trick scorers, surely Ollie Watkins has to be on that. A first half hat-trick against the defending champions probably surprised him as much as anyone.
James, Galway

Why the hell do you guys set your clocks back one hour?! Do you know how inconvenient that is for the rest of us in the world?

Today I thought I would stay up to watch the Liverpool game at 12:30 am. Then I find out that CL games will be at 1:30 am since daylight saving time is here. It’s so much more draining to have to stay up an extra hour during a regular week and I end up giving most CL group stage games a miss, as I generally do not want to be a zombie during a weekday.

You know what’s even worse? F365 is my normal 2pm lunchtime partner, by then the mailbox, big weekend, all the good articles are normally out. So when I opened it today, imagine my surprise at seeing nothing new uploaded besides the useless gossip column (seriously does anyone even find transfer gossip interesting?). That’s the most irritating aspect of this clock adjustment. It’s successfully ruined my daily routine. Fix your time UK.
Sid, LFC (Don’t know what to write in the brackets)

Not to dwell on what’s been said better by others, but trying to keep politics out of football is itself a political position: what’s a bigger statement of where you stand on things than trying to shut down awkward conversations?
Tim (fearing yet also enjoying a big season from Spurs) , LFC, Mexico