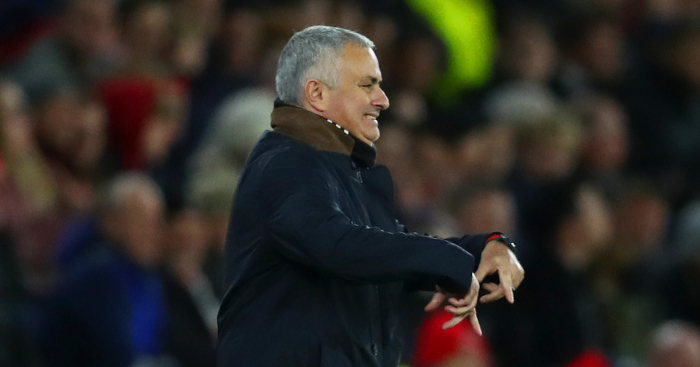 Brave
Man Utd come from 2-0 down and you make Jose Mourinho your early loser?!?

The players are trying to get Jose sacked
The intensity in Man United players when we were 2-0 down was awesome. The desire was fantastic. The moment we got to 2-2, it dropped. Clearly, the players are making sure United does not get to the top 4 this season so Jose gets sacked.

As for Jose, here are a few requests.

1. Matic needs some time out. McTominay is a better option at this time.

2. Playing 3-5-2 against Southampton is a criminal mistake. We had two defenders and six midfielders.

3. Was Bailly injured? He is better than Matic in defence. Yes he seems casual but he is actually the best defender at United

3. Mata was instrumental in connecting attack with defence. Paul doesn’t give a crap at this time. Play Mata and Fred.

4. Play ball into space for Lukaku and Rashford to run into. Martial likes to receive the ball at his feet. It’s that simple. Asking Lukaku to handle long balls is like asking an elephant to dance. Neither graceful nor useful.

5. Fellaini is a great substitute. Keep him as your super sub.

6. There are too many players underperforming. The writing is on the wall for the manager.

8. We are not going to make top four.

9. Carrick is going to be our caretaker boss for the last few games this season. I hope he does well.
Sudarsan (United drawing Crystal palace and Southampton is a disaster. Kudos to Southampton. You deserved to win)

Will he ever accept any blame?
A few weeks back Jose Mourinho lamented the fact that Bailly can’t play with Lindelöf, hence he doesn’t play Bailly because he prefers Lindelof. Strangely, nobody asked him why did he buy both of them for huge sums without checking if they fit into the team, but I’ll let that one go.

After the Southampton game, he started some garbage talk about needing mad dogs in midfield. Again, he spent vast sums of cash on Pogba and Matic, players who were never going to be that type of player. This looks to be a fault on his part but I’ll let it go.

I’m going to just bring up one other statement he made after the Southampton game: “It doesn’t matter the system we play,” Mourinho said. “Not winning has to do with the characteristics of the players.”

You are an analogue manager in a digital age. No doubt many of the Utd players are lacking, but Jose’s inability to get any improvement in ANY of them is quite simply a failure on his part as that is his job.

Top 4 by end of year isn’t achievable with the current toxicity around the club, but just as a reminder, this man was bleating that he was certain Utd would be in Top 4 by end of December only 10 days ago. He then proceeded to fire out negative tones about his signings being a level below the level he wants and players not being mature anymore. Such a motivational Master.

I’m looking forward to the media hammering him about them Top 4 quotes because his head is quite possibly going to explode on live tv with players namechecked and abused into oblivion.
Gary B (Woodward will let him batter on until summer time then use Top 4 excuse to turf him)

United are the new Arsenal
The last 4 or 5 years under Wenger that is.  Big section of supporters desperately wanting to believe in both the manager and the team and, by extension, also clinging to a deluded hope that the ‘glory years’ will be back anytime soon.  So-called ‘comebacks’ against Juventus and, er, Newcastle and Young Boys (blimey) allows these die-hards to cling to the faintest sliver of the last straw of optimism.  It’s just a glitch, we’ve too many injuries, our board hasn’t spent well/invested enough etc etc.  Another section of fans know exactly what they’re watching and who’s to blame.  Some were wearing green and gold scarves years back.

At the end of the Saints/Utd game, the TalkSport commentator (Saggers I think) said something along the lines of “Mark Hughes will be buoyed by earning a point against the mighty Man United” and I instantly thought “The mighty who-now?”.  They are still, arguably, the biggest club in the world but when was the last time they were mighty?  After 14 PL games last season, Utd were 2nd having scored 32 goals and conceded just 8.  Saturday night they’d scored 22 and let in 23 and were 15 points short of the second slot.

You had the image of the Arsenal changing room some years back with the players celebrating with champagne after the last match of the season.  The reason?  They’d snatched fourth place.  Not won the league, ‘achieved’ fourth place.  Then a week or so ago, Jose is telling the press he was confident United ‘could’ reach top four by the end of the festive period.  No!  Really?  Fourth place?  Thank you Jose, we’re not worthy!

For the neutral, the last years with Arsene were excruciatingly boring listening to him spout the same tired crap time after time after time.  For the last two seasons, it’s Mourinho doing the same but with a complete absence of the charm and humour that the Arsenal manager could still then summon. Not my fault, it’s this player, or that one, or the board, or the officials, or even the sodding Police because we couldn’t organise getting our own team to their own ground on time.

Both were outstanding and ground-breaking managers in their time whose impact on European football cannot, and should not, be ignored.  But Jose has outstayed his welcome in a far shorter time than Arsene did.  He is a miserable, outdated, irrelevant manager seemingly incapable of grasping how out of touch, both on the field and off it, he now is.
Mark (Personally I hope they renew his contract for another 3 years) MCFC

Schadenfreude
Firstly, commiserations to Southampton. Those relegation six-pointers are the ones you really need to put to bed.
Secondly, I hope Lukaku makes a full recovery. I stood on one of my daughters rollerskates once and sprained my ankle so I feel his pain.

It’s the 1st December.
Man Utd are: 16 points behind Man City
Only 14 points above Fulham in 20th
7th in the table, behind Everton
On a -1 goal difference

I thought the presents came at the end of the month?
Stu AFC (keep him on forever please) Wrexham

Southampton played too…
Southampton’s midfield is lovely. How are they in the relegation zone? Those midfielders are really good on the ball. Lemina seems to just be gliding around the pitch.

I think the main problem is the lack of a manager capable of coaching good possession football. This team will be really good with the right manager.
Sid, LFC, Mumbai