Home Manchester United News Time for you to swallow your pride, Louis… 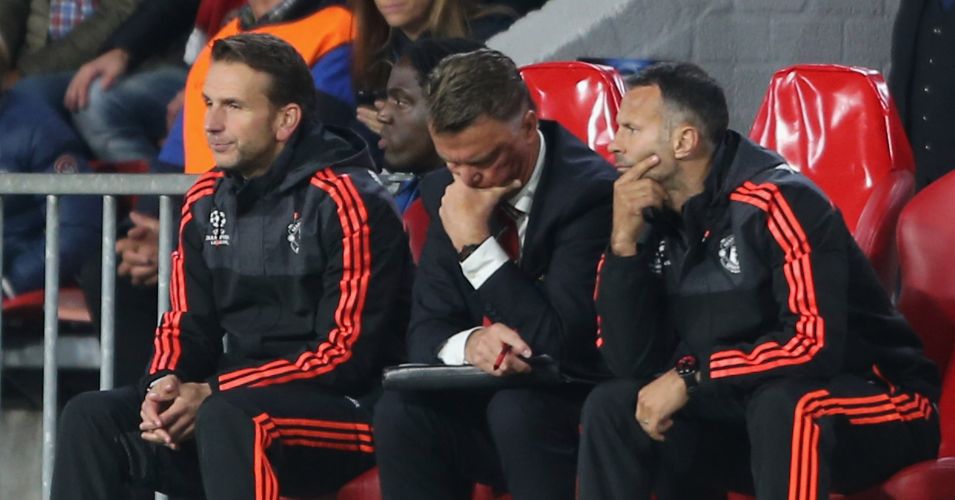 Manchester United may have lost on their return to Champions League football proper, but there were positive signs aplenty. Is Louis van Gaal brave enough to maintain change? Not at all…

“It’s fantastic to be here again. Anthony Martial scored a goal, but Wayne Rooney is injured and Marouane Fellaini is a little bit ill so I didn’t have any other choice. He had to play.”

Saturday brought the most effective of confidence boosts, but Louis van Gaal’s attempt at keeping Anthony Martial grounded was typical of the manager. The reward for a memorable goalscoring debut was a start in the first Champions League game in the Van Gaal era, but don’t get too carried away, kid.

Martial’s inclusion from the start encapsulated a side of the Dutchman we are yet to see in the Premier League – one which treated United’s long-awaited return to the grandest stage with the appropriate grandeur. Martial’s support act included Juan Mata starting in the number 10 role, with Memphis Depay on the left and, after his game-changing introduction at the weekend, Ashley Young on the right.

Behind that irresistible foursome sat Ander Herrera alongside Bastian Schweinsteiger, the Spaniard dropping deeper to help form a partnership of experience, steel and guile. This was a front six and a tactical decision from the manager which reflected the renewed positivity surrounding the club. Disappointing though defeat may be, it should not detract from a much-needed change in approach.

They weren’t the most illustrious or accomplished of opponents – seven of PSV’s 11 starters were making their competition debuts – but it was an opponent and an occasion which presented a fresh and imposing test for the Red Devils. Champions League football is Champions League football, and United had finally returned to the scene they once called home.

And with a more positive formation came a promising first-half approach from the visitors. ‘Sterile domination’ is a phrase which has become synonymous with Van Gaal’s reign, and while 61% possession in the opening 45 minutes alludes to more of the same, the United on show was more akin to the sweeping attacking unit characteristic of Sir Alex Ferguson’s sides.

Much of this was down to Martial. Where a languid Wayne Rooney or a static Marouane Fellaini tends to weaken United’s interchanges, the Frenchman’s tireless movement allowed those behind him to take more risks with the ball. Van Gaal’s men made 252 passes in the first half – the fewest they’ve made in the opening period of any game so far this season. Regardless, they looked as potent in attack as they had all season, with Martial, Chris Smalling and Depay all spurning early opportunities to open the scoring.

Much of the build-up to the group opener had, understandably, surrounded Depay’s return to the Philips Stadion. The 21-year-old had shown only brief glimpses of fulfilling his £25million valuation, with his double against Club Brugge in qualifying whetting the appetite for the time being.

“It’s a new experience for me in the Premier League, so I have to improve and I know that.” Depay’s frank self-assessment of his struggles ahead of Tuesday’s homecoming revealed a player willing to adapt. “I learned some things here [at PSV] but, as the boss is saying, the competition is different and I have to learn in the Premier League – to improve there.” As far as Europe goes however, there are no lessons required for the Dutchman. With half-time beckoning, the Dutchman followed up his Brugge brace with some remarkable deft footwork before finishing with aplomb. His former employers know only too well the danger he poses, but stopping him is an altogether different thing.

The link-up play between Martial and Depay will leave United fans pondering the brightest of futures. Martial was isolated at times as a lone striker, but performed his role admirably and allowed the rest of his teammates to flourish when possible.

But after being substituted at half-time in the 3-1 victory over Liverpool at the weekend, there is undeniably work to do for Depay to fulfill his potential. Glimpses of his talent in Europe will satisfy fans for now, but improving on the domestic scene is a must. That he is only too aware is half the battle.

Of course, United’s new attacking approach had a predictable consequence. Although PSV’s equaliser from a corner involved a touch of misfortune, the winner from Luciano Narsingh will have angered Van Gaal. Only Manchester City have been breached fewer times in the Premier League this season, but with the focus placed further on attack, a defensive unease that characterised the reign of Van Gaal’s predecessor had returned. Matteo Darmian’s performances have rightfully earned the plaudits so far this season, but his rare mistake led to PSV’s second, with Marcos Rojo isolated on the other side.

Through no fault of his own, Rojo’s presence represented the biggest negative on the night for United. After such a remarkable improvement in his game of late, the image of Luke Shaw clutching an oxygen mask as he was stretchered off was a cruel one. Best of luck to the 20-year-old on a full recovery.

Back to the game, which saw United revert to type in the second half. They played 329 passes to PSV’s 128, but it was clear which side posed the bigger attacking threat in the second period. It seems more than a coincidence that, excluding the Champions League play-offs with Brugge, United’s three largest shares of possession so far this season have come against Newcastle (69.3%), Swansea (64.5%) and the Dutch champions (61%); United’s three most disappointing results. Against an opponent happy to sit back and absorb pressure, United predictably struggle. A change in approach in the first half brought positivity, but Van Gaal lacked the Dutch courage to continue into the second half.

One fears that defeat, particularly from a leading position, will render Van Gaal reluctant to replicate such an uncharacteristically forward-thinking approach, but that would be a huge shame. It would take time to implement a lasting change in his beloved ‘philosophy’, but it is a change that would surely be worth the time.