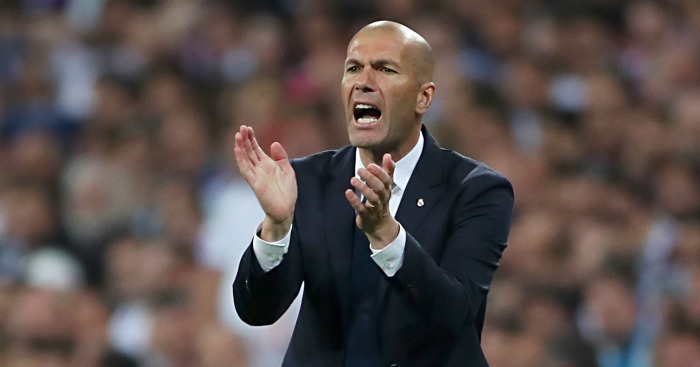 If we can usually expect Champions League semi-final first legs to be cautious, fractured affairs (eight goals in six matches over the last three seasons certainly suggests as such), there were celebrations when the draw was made for this season’s final four. Monaco and Juventus offers a match-up between two aesthetically pleasing teams who are broadly the most popular amongst neutrals, while avoiding a Madrid derby for the third time in four finals was appreciated in favour of variety, if nothing else.

El derbi Madrileno will never fail to be an absorbing, alluring contest, but it had rarely been a more appealing prospect. Diego Simeone’s style has not wavered from his original blueprint for Atletico, but it is now in direct contrast with the approach of Zinedine Zidane at the Bernabeu.

Real had scored in their last 58 matches in all competitions but had kept one clean sheet in their last 16 games. Zidane’s team can only boast the fifth best defence in La Liga, but Atleti have conceded the fewest, just as they did last season. Since the beginning of 2012/13, Simeone’s first season in charge, Atletico have conceded 129 league goals. Real Madrid have conceded 201.

The promotion of Zidane from the Castilla team to the Bernabeu has increased the gap. In every one of their Champions League matches this season before Tuesday, Real had scored and conceded. In contrast, there had been more than one goal in only four of Atletico’s ten European games since losing the final last May. Real have already conceded more league goals than in six of their last seven seasons, but the standout statistic regards clean sheets: Atleti have 19 in La Liga, Real Madrid just eight. That is fewer than Leganes in 17th, who are 51 points behind Real.

A good night to find that first European clean sheet for a year then, and produce a defensive display that almost matched the magnificence of Cristiano Ronaldo. Atletico were below par in the Bernabeu, as if struck by ‘The Fear’ that seems to haunt them against their city rivals. Simeone’s team failed to have a single shot on target, but Real were resolute and defiant. If we saw Bad Sergio Ramos in El Clasico, this was Ramos at his leading, marauding best.

Zidane began his coaching career at Castilla with an intention to play possession football out from the back. Yet in an interview with FourFourTwo magazine in January 2016, Zidane’s mentor Guy Lacombe explains that Zizou soon realised that his squad did not have the skills for this approach.

“We realised that he needed to change the style of play,” Lacombe said. “We needed to move from a possession-based game to something more direct and more efficient.” Having enjoyed notable success with that approach, Zidane then transferred it to the first team.

Real Madrid’s squad is set up to attack. In Dani Carvajal and Marcelo they have two full-backs at the peak of their powers, and in central midfield they have the metronomic Toni Kroos and a Luka Modric who improves with age. Against Atletico, Isco was able to flutter and flirt around midfield without having to care too much about tracking back, and the Spaniard was almost faultless.

Yet every successful coach needs a big-game player and, in Ronaldo, Zidane has his. Three weeks ago, Lionel Messi was the top scorer in this season’s Champions League with 11 goals and Ronaldo had two, but five against Bayern Munich and three more against Atletico means this superstar is enjoying yet another purple patch. Ronaldo scored the 42nd hat-trick of his Real Madrid career, and his 399th goal in 389 games. Winger became all-round centre forward became target man, with all the bells and whistles you can find. At 32, we are still witnessing true majesty.

Such is Ronaldo’s devotion to his physical well-being and mental strength, he will continue to push back the boundaries of what we think is possible, or at least plausible. Yet so too is his coach. If Ronaldo’s glory has become commonplace, Zidane’s is far more surprising. On Tuesday evening, Real Madrid produced their most complete performance of the last two seasons in a Madrid derby Champions League semi-final first leg. That takes some doing. That takes some coaching. It is extraordinary to think that this is Zidane’s first top-flight job, and extraordinary too that he has lost just six of his 81 matches in charge.

Zidane is the man who made Real Madrid’s sexiness and success mutually inclusive. For while no coach will be content to concede goals, Zidane has created a team that is wonderful to watch not just when thrashing meek opposition but also in the biggest matches domestically and in Europe.

José Villalonga, Arrigo Sacchi, Dettmar Cramer, Bob Paisley, Rinus Michels, Helenio Herrera, Béla Guttmann, Brian Clough; these are the managers to have won consecutive European Cups. If Zidane adds his name to that list, it should rightly be hailed as a truly magnificent achievement. For all the wealth and talent at his disposal, nobody saw this coming.