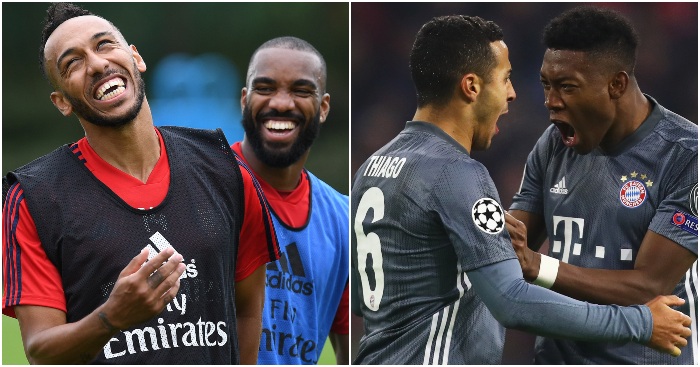 These players are all on contracts due to expire in 2021, which means it’s almost renewal time. Expect to hear from their agents very soon…

GK: Gianluigi Donnarumma
Manuel Neuer’s contract is also up in 2021 and despite his agent starting the public negotiation process already, it seems far more likely that Mino Raiola will make a far bigger fuss over Donnarumma.

It was thought the AC Milan keeper would be on the move this summer, especially in the wake of Milan’s failure to qualify for the Champions League. But it seems the 20-year-old is willing to stay at the San Siro for now. Presumably Mino has Donnarumma down as one of his big pay-days this time next year, with Matthijs De Ligt and Paul Pogba keeping the roof over his head in the meantime.

LB: David Alaba
“I am aware that some day I will have to make a decision but I still feel good here,” said the Bayern Munich left-back amid reported interest from Arsenal and Barcelona. “But I can also imagine myself taking a different path, taking another step or seeking a new challenge.”

Bayern have already rebuilt half of their defence but the 27-year-old looks likely to escape the cull if Lucas Hernandez is used primarily as a centre-back. And Arsenal’s targets lie elsewhere. Given the Gunners can barely afford Kieran Tierney, Alaba must be way out of their price range until he gets closer to free agency.

CB: Matthijs De Ligt
De Ligt won’t renew and Ajax will cash in now before the 19-year-old’s value decreases, but it seems that Raiola is not the problem here. The defender appears to have decided upon a move to Juventus rather than join PSG, Barcelona or Man Utd but Juve are playing a dangerous game in haggling over the fee.

United and PSG are said to have agreed terms with Ajax but Juve have only offered around £50million plus add-ons so far. Nor can they afford Pogba, though it hasn’t stopped them pursuing the United midfielder either.

CB: Sergio Ramos
The Real Madrid defender went early with the bullsh*t this time. Having used Manchester United in previous negotiations, this time Ramos tried it on by asking to leave for nothing having received a massive offer from China. Florentino Perez laughed Ramos out of his office and within a day or two, the Spain star was pledging his undying loyalty to Real.

Ramos will be 35 by the time his current deal expires and it seems likely that he won’t re-sign. “If I do ever leave Madrid it will be as my level is no longer good enough,” he said. “And I would go to a team which doesn’t compete with Real Madrid.” Man Utd perhaps…

RB: Lukas Klostermann
The Germany right-back timed a hugely impressive European Under-21 Championships perfectly as his agent starts to think about contract negotiations with RB Leipzig. Unless Leipzig are making their own plans to cash in on the 23-year-old…

Arsenal and Atletico Madrid have both been credited with an interest in Klostermann but Arsenal surely have other priorities with the pittance they have to spend in the market this summer.

LM: Paul Pogba
The Manchester United midfielder is on the way to Australia with a face like a slapped arse but it seems likely he’ll be returning to Europe before the rest of his team-mates if Mino has anything to do with it…

📷 | Pogba at Manchester airport joining the rest of the squad for #MUTOUR. pic.twitter.com/SRe8c2KdNC

RM: Marco Verratti
“Last week he was partying until 6am for Neymar’s birthday, because he smokes, he drinks, he’s out almost every day of the week,” said French journo Julien Laurens of the PSG midfielder just after he had bossed Man Utd at Old Trafford before PSG chucked it away at home.

No wonder Verratti seems keen to stay in Paris and reports in February suggested a new deal was close to being agreed. But there has been no word since then and the Italy midfielder is sure to use Ander Herrera’s terms as a new starting point in negotiations.

CM:Thiago
“I have a contract until 2021. I never thought I’d stay at Bayern so long. To me, it’s very important to see out a contract.”

Those words in November 2018 came shortly after a summer when Thiago was linked with Manchester City, Barcelona and Real Madrid when the midfielder suggested his future was “very complicated”. But having put some injury problems behind him and become a mainstay in Niko Kovac’s midfield, Thiago will no doubt be invited to join Bayern officials around the negotiating table in the coming months.

LW: Lionel Messi
Barca president Josep Maria Bartomeu is not bothering to play it cool over Messi’s contract. “We would like to renew his contract, that’s the idea,” Bartomeu said in April. “He still has many years in front of him and in the coming months we will sit down with him so that he has many more years at Barcelona. Messi is a one-club man.”

To ensure that remains the case, Barca will presumably have to reinforce Messi’s status as the world’s highest-paid player. According to L’Equipe, the 32-year-old already pulls in £1.67m a week before tax. Which may explain Barca’s recent conservative approach in the transfer market.

RW: Leroy Sane
Bayern Munich badly want the Germany winger – but so Manchester City. Pep Guardiola has put plenty of work into the winger, using both his carrot and stick, and City would be loathe to lose the 23-year-old.

So they have slapped a huge price-tag on Sane which seems to have done the trick. “It’s unlikely that it will work,” admitted Uli Hoeness. “It’s about the sums, they’re insane.”

CF: Pierre-Emerick Aubameyang
Arsenal’s frugality apparently doesn’t extend to their record signing, who is reportedly due to be offered new terms on the £198,000-a-week deal he signed upon signing for the Gunners in January 2018.