Home All The News Time’s up: five who should be departing Arsenal in summer 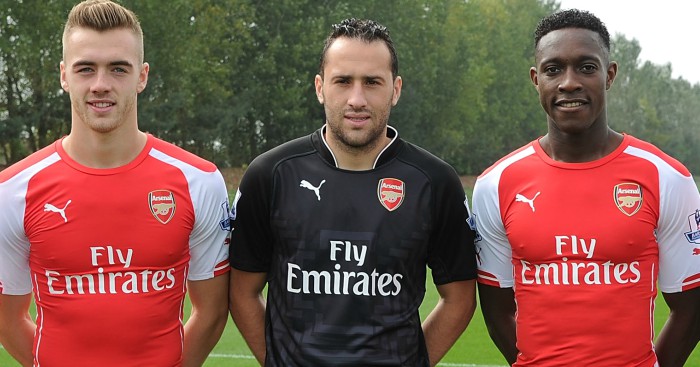 David Ospina
The Colombian is almost certain to move on at the end of the season and you would imagine that it will not be a tearful goodbye, despite Arsene Wenger’s persistent praise of his back-up goalkeeper.

It is standard practice for managers these days to fluff the ego of their No.2s, just as it is to allow them the chance to get their gloves dirty in the domestic cup matches and Europa League games. But, whatever Wenger says, Arsenal do not have two “world class” keepers. At the moment, they don’t have any.

If Wenger really rated Ospina that highly, he would not have felt the need to recruit Petr Cech in 2015. Cech has failed to justify the hype – John Terry said he would be worth 12-15 points a season to Arsenal – since he arrived but he remains comfortably the more reliable option in comparison to Ospina. The former Nice stopper was better than Wojciech Szczesny, who was chucking them in when he gave up his spot to Ospina in winter 2015, but Wenger recognised then that Arsenal can still do better.

It isn’t easy for a keeper to come in and perform when they spend most of their time sat on their backsides, but that is the single demand of the modern-day No.2. Ospina will go elsewhere this summer, and he may well do a commendable job for someone, but Arsenal can and must do better.

Granit Xhaka
The Swiss star was one of the players skewered by Gary Neville, and Xhaka has become a regular target for many Arsenal fans. The midfielder seems to have been front and centre of many of Arsenal’s recent embarrassments.

That is perhaps because, however questionably, Wenger has come to rely upon Xhaka. The £35million purchase from Borussia Monchengladbach in 2016 has played more Premier League minutes this season than any other Arsenal outfield player except Hector Bellerin.

Despite the faith Wenger seems to hold in Xhaka, it seems he isn’t sure what type of midfielder he is. Anyone with eyes can tell you that he is not a holding midfielder, an anchor like Nemanja Matic or N’Golo Kante. But so often it is he who is trusted with the job of protecting Arsenal’s so-often-shaky back four.

He does not have the mobility, discipline or temperament to play such a position on anything other than an emergency basis. If anything, Xhaka needs to be the player next to a designated sitter, though he offers no more in that role than Jack Wilshere or Aaron Ramsey, other than being able to hit a ball very, very hard.

Danny Welbeck
‘There is a permissible argument that Welbeck was never quite good enough for what Manchester United, Arsenal and England needed (and need) him to be, but that is an unanswerable – and uncharitable – question,’ wrote Daniel Storey last week. Uncharitable, perhaps, but that is very much the grim reality for the forward.

Injuries have prevented Welbeck from dispelling the doubts that have followed him throughout his career since Sir Alex Ferguson labelled him “a certainty to make it to the highest level”. It has been very much a case of out of sight, out of mind, with Arsenal moving on – if not necessarily forward – without the 27-year-old.

Now he is physically fit, Welbeck is relegated to the role of Europa League forward, and despite the Gunners having scored 10 goals in his four appearances in the competition, Welbeck has not directly contributed to any of them. Wenger has spoken of his desire to keep Welbeck if he stays fit – a huge caveat – because he is “useful”, what with being able to play on the wings. But the former England forward has a decision to make. If he wants to prove himself at any level, then Arsenal is perhaps not the place for him. Welbeck has already made a move out of his comfort zone in his search for first-team football when he left Manchester United. If his motivation level remains the same, then he will have to consider doing similar again.

Calum Chambers
Unlike Welbeck, Chambers has time on his side. The defender is still only 22 but, as Wenger acknowledged when he sanctioned a loan move to Middlesbrough last season, the former Southampton academy graduate needs some stability and the opportunity to play regularly. He will likely only do that at Arsenal when others are not available.

The Arsenal defence – whatever shape it takes – is not an ideal development environment, nor is their bench. Despite the promise he showed at St Mary’s, which led to senior England caps aged 19, Chambers is simply not pushing on, as his two performances in the last five days have demonstrated. Wenger believes the defender has “immense qualities” but for a variety of reasons, we are not seeing them.

“He sees me at right-back, centre-back, holding centre midfield. He sees me in a variety of different positions,” said Chambers when discussing why Wenger signed him for fee which may have risen to £16million. But three and a half years on, he is nowhere close to making himself first choice in any of them. Whether it be on loan again or permanently, Chambers needs to take a step down from Arsenal if he is ever to make the steps up to the level Wenger would have fancied him to reach by now.

Arsene Wenger
Time’s up. Time was up last season, but for whatever reasons, both the manager and his club believed their relationship was worth one final go. However, the apathy and, in some respects, resentment is so ingrained that it was obvious they were just delaying the inevitable.

No individual is solely to blame for Arsenal’s persistent mediocrity in comparison to their rivals. Rather it is the culture of cruising that is ingrained throughout the club that is responsible for the frustration their fans so regularly feel. That does not mirror Wenger and his values but it is he who has allowed his squads to remain in their cushy comfort zones.

Typically, even though Ivan Gazidis acknowledged that last season must be seen as a “catalyst for change”, the club have attempted to stop the rot with a series of appointments around Wenger, including new heads of football operations and recruitment. But the status quo will remain at the Emirates for as long as the figurehead remains.

By the end of the season, the likes of Raul Sanllehi and Sven Mislintat will have their feet firmly under the table. Their immediate priority must be the appointment of a coach who can work within the new structure while applying the necessary ruthless approach that provokes the players to shape up or ship out. The Flaccids need a new manager.