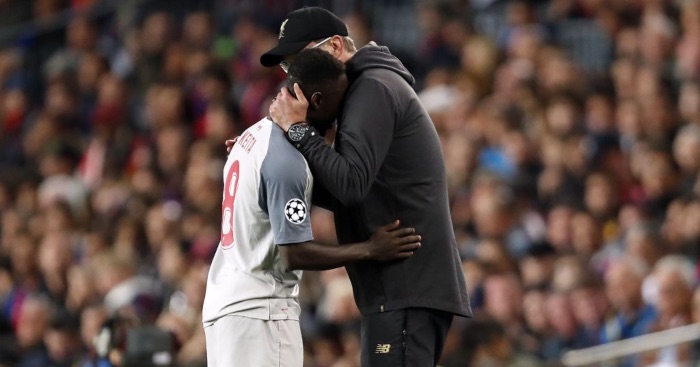 Naby Keita has made just four Liverpool starts since April, partly due to injury, but mainly because he’s not been good enough. Inklings of the form that earned him his move to Anfield have appeared fleetingly, but Jurgen Klopp can only deflect the questions of those querying the poor performances of his £54million acquisition for so long – it’s been too long already.

Keita was hauled off on the hour mark in both of his two League Cup starts in that time, with Jurgen Klopp forced to defend his midfielder’s displays while lavishing praise on the untried and untested academy prospects that surrounded him. And while securing starting spots in two of Liverpool’s Champions League group games would be a sign of managerial trust in most cases, on these occasions the prestige of the competition belied the importance of his role in the squad. Victories against Genk – ninth in the Belgian top flight amd the whipping boys of Group E – were all but confirmed before the players stepped on to the pitch. It didn’t really matter who those players were.

Although he’s been injured for half of Liverpool’s 12 Premier League games this season, the Guinean international has seen just 14 minutes of football in the six games he’s been available for. In those 14 minutes Liverpool did turn losing positions against Manchester United and Aston Villa into a draw and a win respectively, but not even the most blindsided of Keita advocates could suggest he had any significant bearing on those results.

In January – five months after Keita’s move to Liverpool – Klopp insisted his summer signing was still adapting to life on Merseyside. And fair enough; Premier League greats have taken longer to make their first significant mark on England’s top flight.

A month later the German boss was again batting off press criticism, claiming he was happy with his midfielder but that there was much more to come. Again, justifiable: he deserved more patience.

But by September, Klopp’s continued claims that adaptation was still required became a case of a man who doth protest too much, and his latest attempts to allay Liverpool fans’ fears by insisting Keita is “close to his best” finally has people calling bulls**t. There have been faster adaptations on an evolutionary scale in the animal kingdom. And if this instance – as with evolution – is a case of survival of the fittest, Keita is far from a natural first-team selection.

He had a bigger build-up than most when he arrived at Anfield in the summer of 2018 in a deal that was agreed with RB Leipzig a year earlier. Having repeated the fine performances of the previous season for the German outfit in that limbo year, by the time the Guinean international finally stepped off the plane at the John Lennon airport, anticipation was huge.

The Reds fell short of Manchester City by 25 points in the Premier League and lost the Champions League final to Real Madrid ahead of Keita’s arrival. And the high-energy, creative midfielder was seen of one of the last pieces of a puzzle, to take Liverpool that one step further. Along with Fabinho, Keita would turn what was deemed a functional but limited midfield – consisting of James Milner, Georginio Wijnaldum and Jordan Henderson – into one the rest of Liverpool’s ‘heavy-metal’ team merited and required.

Fabinho, like Keita, took time to acclimatise to the Premier League, but their performance trajectories split after those first few months and have moved further and further apart as the Brazilian is now one of the first names on the teamsheet. Keita has been a positive influence on the Liverpool midfield, in that his arrival coincided with the improvement of both Henderson and Wijnaldum, under pressure to perform to keep their places in the team. But £54m is a lot of money for a motivational tool.

The Reds play Crystal Palace on Saturday ahead of a packed Christmas period, in which Liverpool face a minimum of twelve games in just over a month. And with only one of them against a top six side, a relatively easy run of fixtures would seem the perfect opportunity for a player completely devoid of confidence to prove his worth. And Keita needs to, because Klopp’s unmitigated backing of the 24-year-old will surely start to weaken should he not show signs of improvement. The German will be confident of finding a much cheaper, more reliable alternative in central midfield in the transfer market or promote the likes of Curtis Jones from within, who’s shown his talent in short bursts for the first team. It’s now or never for Keita.