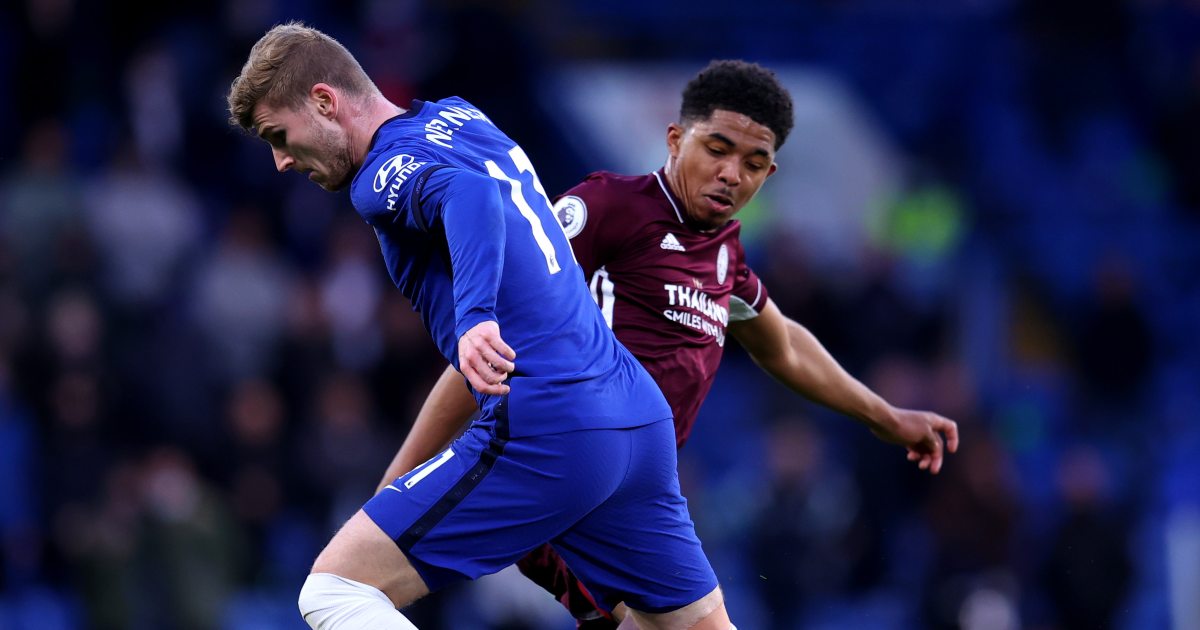 Chelsea fans have a hero in Timo Werner…just not a goalscoring hero.

Three weeks after Chelsea gave themselves a chance of being the ‘despite’ European champions and just three days after they missed the opportunity to become the ‘despite’ FA Cup winners, the Blues put themselves in pole position to qualify for the Champions League again ‘despite’ barely having a striker worthy of the billing this season.

Jorginho’s penalty stretched Chelsea’s lead to 2-0 and simultaneously made him the Blues’ out-and-out Premier League top scorer for the season on seven goals. Seven! Only Fulham and Wolves can ‘boast’ a top scorer with fewer goals. That’s not the kind of company you expect Chelsea to keep on any metric, but certainly not in terms of goalscorers after a summer that saw them spend eye-watering money on a 28-goal Bundesliga striker and two more handy finishers in Kai Havertz and Hakim Ziyech.

Against Leicester, Timo Werner contrived to have one excellent penalty claim turned down and two goals disallowed in a first half that served as a microcosm for his first season in English football. That he was still making runs and frankly working his hoden off as the clock ticked down on a priceless victory made him an unlikely hero to the Chelsea fans allowed into Stamford Bridge. In that moment they cared not a jot that this has been a season of poor timing and awkward finishes from the German. They saw effort almost beyond comprehension at the end of a long and exhausting season.

That effort was replicated throughout a Chelsea side who responded to the twin disappointments of losing to Arsenal and Leicester with redoubled focus. From the very first minute against the Foxes, they were energetic, dynamic and organised. They were everything Chelsea have become under Thomas Tuchel, including profligate in front of goal. He has now taken Chelsea from ninth to third with Premier League form that has only been bettered by the champions Manchester City. They have conceded just 11 goals in 18 games while scoring even fewer goals than Newcastle in that time-frame. It’s been a true triumph of coaching that has thoroughly deserved a top-four place. It would be a shock if they did not go to Aston Villa on Sunday and finish the job.

In truth, Leicester were poor in this game, seemingly exhausted by Saturday’s success or celebrations. They might have cast themselves as the people’s club this season but the people were knackered by Tuesday. They now face the task of rousing themselves again at home to Tottenham, who have actually been in considerably better league form than the Foxes over the last two months. They may have to not only win but win well. On this evidence, that may well be beyond them.

Most neutrals will not celebrate this success from Chelsea but they should at least respect the job done by the German in turning a rabble into a really good football team. Where there was chaos, there is now control. When they attack, they attack with speed and incision but with a very clear plan. Add precision to that incision and this will surely be a side that challenges for the title rather than the top four.

Judging by the response of the fans inside Stamford Bridge to Werner haring around the pitch, they would quite like that precision to come from the honest German. He claims it is the “unluckiest” season of his career, but he might feel incredibly lucky on Sunday if Chelsea retain their Champions League place despite being stranded in mid-table four months before.