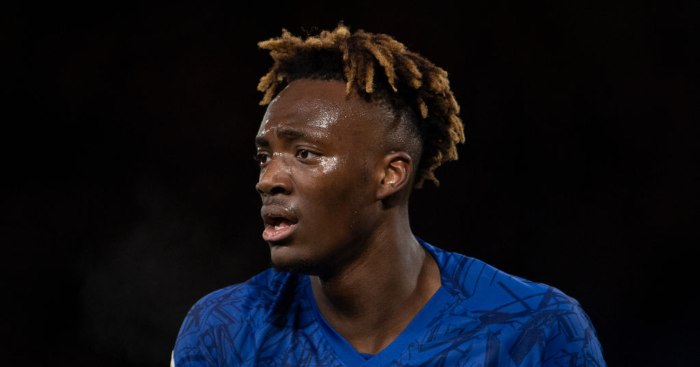 Tammy Abraham is biding his time over agreeing new terms at Chelsea with the imminent arrival of RB Leipzig striker Timo Werner, according to reports.

The England international has scored 15 goals in all competitions for the Blues this season but was suffering with an ankle injury just before the Premier League was halted due to the pandemic.

Chelsea are keen to tie Abraham down to a new deal as he has just two years remaining on his current contract.

There had been reports that Abraham was demanding pay parity with Chelsea’s highest earners to reflect his status as the club’s first-choice striker, but at the end of March Daily Telegraph journalist Matt Law – who has excellent contacts at Stamford Bridge – claimed that those reports were false.

However, the potential arrival of Werner from Leipzig could throw another spanner in the works for Chelsea with Abraham now facing competition for his spot in the team.

The Athletic claims that there ‘were no specific conversations with Abraham about Chelsea’s decision to move for Werner’ but that Frank Lampard will be watching him in upcoming training sessions to ‘see how he reacts to the news’.

Lampard ‘still considers Abraham central to the Chelsea team he is building’ with Werner able to play alongside Abraham and not necessarily instead of the 22-year-old.

With Werner likely to earn around £170,000 a week plus bonuses, those wages ‘could well establish a new benchmark for Abraham’s camp’ as they look to increase their client’s salary.

The Athletic adds that Lampard is ‘confident’ Abraham will sign up to new terms while the striker is ‘keeping an open mind about Werner’s arrival’.

The report continues: ‘Don’t be surprised, however, if he decides to wait until he has a better idea of what the new arrival will mean for his game time before revisiting the contract question.’