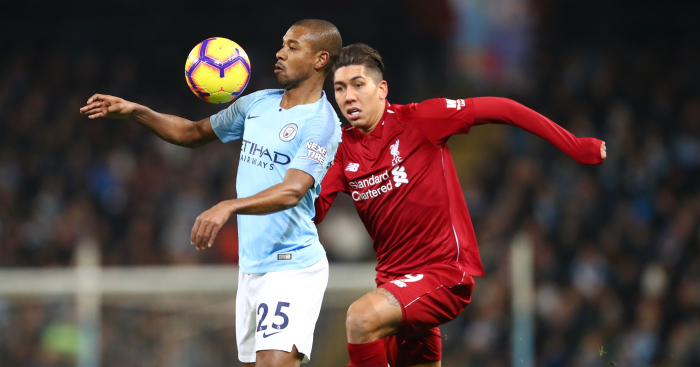 Fernandinho has warned Liverpool the pressure is now on them after Manchester City beat them on Thursday to reignite the title race.

Reigning champions City cut Liverpool’s lead at the top of the Premier League to four points with a tense 2-1 victory in a frenetic clash at the Etihad Stadium.

City midfielder Fernandinho said: “Four points is going to be interesting for the rest of the season for both teams. They are still leaders and they have a lot of games to play as well.

“It is not easy to stay there at the top because the pressure is so high. You have to win every game, so we will see what happens in the end.”

After losing three of their previous five games, the much-hyped encounter was one City could not afford to lose as they risked falling 10 points behind.

Well-taken goals from Sergio Aguero and Leroy Sane saw City strike back after their recent problems but Fernandinho insists the champions were not out to prove a point.

The Brazilian said: “No, not at all – we have a point to prove every game. Last season we were able to make 100 points – 50 points away, 50 points at home – so you have to keep going and play every game and try to win.

“Everyone has this responsibility in mind, to play good football, to try to win every game. You have to prove it in every game, not just on one day.”

Nevertheless, City once again did prove their quality as champions, rising to the occasion to beat a Liverpool side who were unbeaten and had won their last nine games.

“I think all the big games are like this,” said Fernandinho. “You cannot blink. You get punished, all the games are high tension, so you have to be careful all the time and everyone who was involved had the same feeling, the same sensation.

“We had to play our football and try to defend as well as we did, not concede goals.”