Home F365 Says Toby Alderweireld: The other Player of the Year 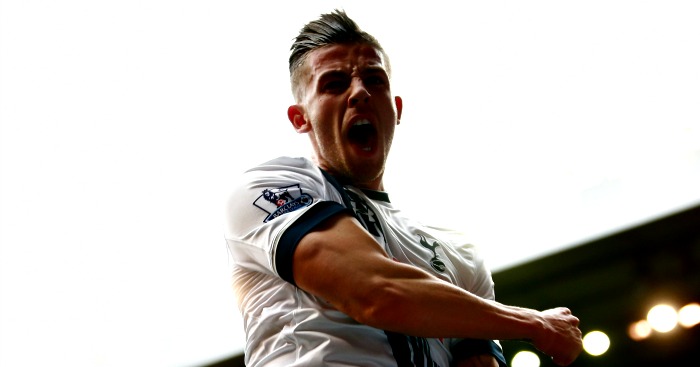 Sergio Aguero in every season since Manchester City signed him in summer 2011. David Silva in 2013/14. Vincent Kompany in 2010/11. Frank Lampard in 2009/10. As quickly as lists of those shortlisted are published, the glaring omissions are named. For the 2015/16 edition, there is only one nominee for that award.

It is no secret that Spurs’ title challenge has been built on a more solid base, an improved defence and a strengthened resolve. Harry Kane has been deservedly recognised for his 22 league goals, while Dele Alli’s startling emergence has granted him a justified place on the shortlist for the Young Player award. But where is the recognition for Toby Alderweireld?

Enter Alderweireld. Playing Vertonghen with his international teammate and former club partner was a straightforward yet remarkably effective solution. Spurs now have the best defensive record in the league, conceding just 25 goals in 33 games – at least five fewer than any other side. Vertonghen plus A N Other was sufficient for European football. Vertonghen plus Alderweireld has been the recipe for a title charge which may yet culminate in glory come May.

The most impressive thing about Alderweireld is that his strength is his lack of weaknesses. He can play centrally or on either side of a defence. His height makes him an imposing figure in the air. He has the requisite pace to counteract faster strikers. He is strong, young and even offers a goal threat. Laurent Koscielny, Vincent Kompany, Chris Smalling and Virgil van Dijk are all impressive, but Alderweireld is the undoubted crown jewel of Premier League defenders.

But, with the announcement of the Player of the Year shortlist, the Premier League’s standout centre-half has been largely ignored by his own peers. How? Why?

Over the past ten years, 40 different individuals have been shortlisted for the PFA Premier League Player of the Year award. Two have been defenders. Manchester United centre-half Rio Ferdinand was nominated alongside team-mate Nemanja Vidic in 2008/09, and the Serb was named for the second time in the 2010/11 season. In the subsequent five campaigns, there has not been a single defensive representative. No John Terry. No Vincent Kompany. No John O’Shea. Goalscorers are the attraction, not goal preventers.

Alderweireld could have done little more to warrant recognition. He is one of four outfielders to play every minute of all 33 Premier League games so far this season. He has scored more goals than every other defender aside from Scott Dann. His quality and winning mentality has transformed Tottenham from also-rans to frontrunners.

Tottenham have benefited from his excellence, but Alderweireld would improve almost any team in the Premier League more than any other player. Riyad Mahrez, Jamie Vardy and N’Golo Kante have excelled at Leicester, but all are playing in a system which suits them perfectly. Harry Kane is a wonderful striker, but so is Sergio Aguero and so is Romelu Lukaku. Dimtri Payet and Mesut Ozil have teams built around them to accentuate their creativity. Remove each of the six players on the shortlist from their clubs and place them in a different side with a different system, and the same results are by no means guaranteed. Take Alderweireld out of Tottenham and place him in the starting XI at Arsenal, Manchester City, Manchester United, Liverpool – any other side but leaders Leicester – and the 27-year-old would improve them markedly. Just as he has at Spurs, just as he did at Southampton. During the current dearth of outstanding defenders, Alderweireld stands very much alone.

Jamie Vardy and Harry Kane received votes from fellow players due to their goalscoring exploits. Dimitri Payet and Mesut Ozil have been backed due to their creativity and guile. Riyad Mahrez is the favourite after excelling in both fields. Leicester midfielder N’Golo Kante is the one who most closely represents a more reserved player on the shortlist but, considering Alderweireld’s stellar season, it is not enough. It is time to build a case for the defence.