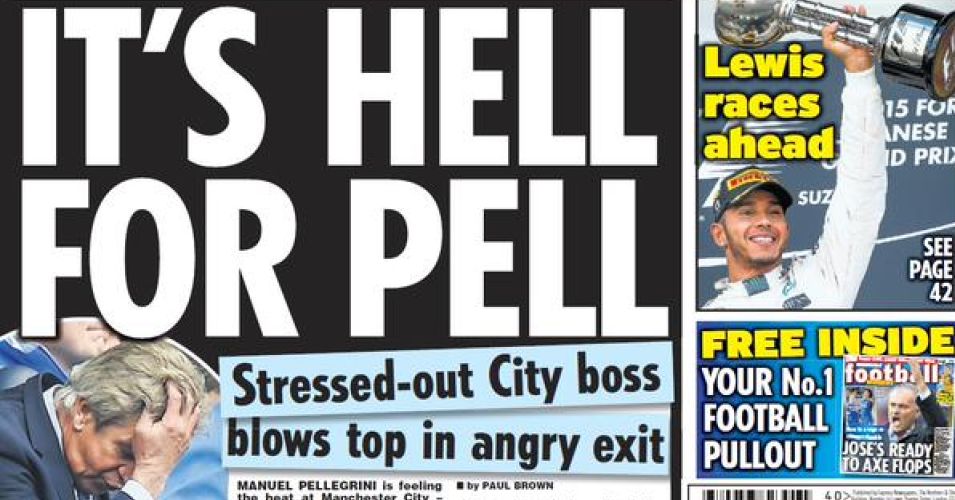 Man is asked why he is not angry; man gets irked. That’s ‘losing the plot’ apparently. What a massive fuss about absolutely f*** all…

The lead story on the MailOnline behemoth’s football page at 9am on Monday morning was that Manuel Pellegrini ‘lost the plot’. At about 3.30pm on Saturday. In front of about six people. This is what happens when Arsenal, Manchester United and Liverpool all win and Chelsea somehow contrive to not lose; somebody has to be in crisis and this week the lucky name out of the tombola drum is Manchester City. Congratulations. It could be a long week.

And there lies the problem. The Daily Star’s Paul Brown obviously did not like Pellegrini being all mild-mannered and non-quotable (a common complaint from journalists in Pellegrini press conferences) after his side lost 4-1 at Tottenham and asked why he did not seem angry. He asked this question in a briefing commonly known as ‘Mondays’, when members of the national daily press are sometimes granted an audience with a manager after he has already spoken to several TV and radio stations as well as conducting a lengthy press conference.

Imagine you have just watched your team lose 4-1, have spent an hour calmly talking about your team losing 4-1 and then somebody asks why you are not angry.

“I am angry in the place that I must be angry – in private, not with you,” he said. “What happened was we lost 4-1. That is the most important thing. Not whether I am angry or I am not angry. No more questions? Okay.”

See the image above to see how this exchange was interpreted by the Daily Star. Which goes some way to explaining why Pellegrini usually keeps his cool.

‘MANUEL PELLEGRINI showed his first signs of cracking on Saturday when he stormed out of a press briefing – into a side-room full of computers,’ writes a sniggering Matthew Dunn in the Daily Express.

‘The funny episode had a touch of the Fawlty Towers about it as poor old Manuel came back and said he would take some more questions just as long as they were about football,’ writes a snickering John Cross in the Daily Mirror, taking his cultural references from 1975.