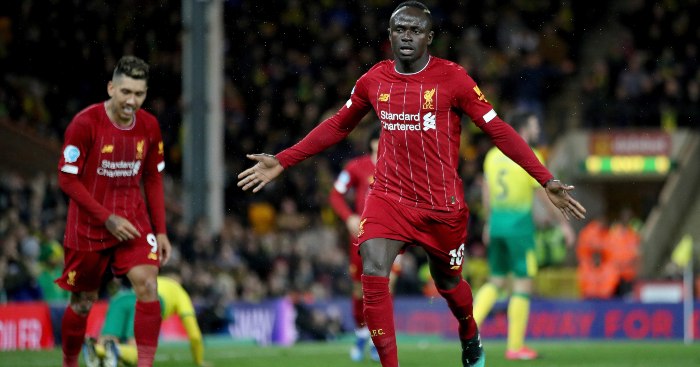 Todd Cantwell thinks the quality of Sadio Mane’s winning goal for Liverpool against Norwich City on Saturday was “frightening”.

Cantwell has been impressive for Norwich this season and he put in another good showing against Liverpool – a side who are understood to be watching his progress.

According to The Athletic‘s David Ornstein, Manchester United and Liverpool have been joined by Manchester City and Tottenham in hunting a deal for Cantwell.

However, the journalist says that Liverpool stepped up their interest in the 21-year-old  midfielder throughout January and are now the frontrunners for his signature at the end of the season.

Cantwell though is focused on Norwich in what is only his second season in the Canaries first team.

“I’m honestly thankful every game that the manager selects me to start in. I’d like to think I’m repaying that and every time I put on that shirt, I’ll give 100%,” Cantwell told Canaries.co.uk.

“I think I’m improving game by game and I feel like I’m becoming a better footballer. On a personal note, I’m loving it, playing in the Premier League against the best.”

Speaking about the 1-0 defeat the England Under-21 man said: “We showed a lot of resilience again. They are the best team in the world at the moment but they came to Carrow Road and didn’t have an easy game – that’s a credit to everyone.

“The resilience we’ve shown at home is something positive we can take but it’s a shame we’ve got nothing to show for it again. It’s been a bit of a reoccurring event.

“The way Sadio Mane takes that out of the air and the way he snaps at it with his weaker foot is frightening.

“We knew we were up against some of the best players in the world. Any sniff of a chance and you’ve got a horrible feeling they’re going to take it.

“When we get our chances, we really need to capitalise because we knew we weren’t going to have spells in the game where we would control the ball how we like.

“The resilience we showed against the ball, I feel like we deserved something from the game.”

“The crowd were brilliant,” Cantwell said. “They matched us in many senses and got behind us when we were struggling. It’s disappointing that we can’t celebrate with them at the end of that.”