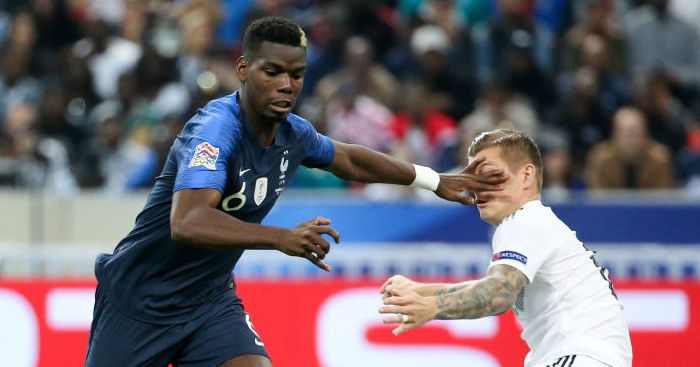 Viv forever
The Sun have a MAN UTD SPECIAL double-page spread in Thursday’s edition of ‘do international breaks get longer every bloody time?’.

The back-page story of Paul Pogba and David de Gea’s injuries, quotes from Paul Ince on talkSPORT and a piece on Kevin Glazer’s decision to convert his 13 per cent stake in the club into shares all feature, but Ken Lawrence takes centre stage. Forget Mesut Ozil and Juan Mata; Viv Anderson is the biggest exclusive interview of the day.

‘The last time things were this bad at Old Trafford Bryan Robson ordered team-mates to the pub to thrash it out,’ it begins. You can see precisely where this is headed already.

‘Manchester United players were told to leave their cars after training and head into town for a showdown.

‘There were to be no exceptions, no no-shows. And it was going to take as long as necessary.

‘The idea that, 30 years on, Ole Gunnar Solskjaer’s entire first team might head to the boozer to sort out their problems seems crazy in these modern PC times.’

The only reason that ‘seems crazy in these modern PC times’ is because certain newspapers would now explode at the thought of footballers going to a pub to try and work out why they’re so sh*t, thereby manufacturing some sort of entirely avoidable and ridiculous public furore.

It’s you, Ken; it’s you and The Sun that would make it ‘seem crazy in these modern PC times’, when it would actually just be colleagues having a pint after work.

But the hilarious part of this whole article is that Anderson says that “Robbo, me, Steve Bruce, we took it upon ourselves to galvanise the boys” by ordering them to the pub, adding that the issue now is that “it doesn’t seem to me like the senior players have what we would do in their thinking”.

Spot on, Viv. It was much better back in those days, when you could all get p*ssed, sort out your problems and go on to dominate English football for the next two decades. It’s ever so simple.

Shame that you went on to finish 13th in the season in which this motivational chat took place, winning the league a whole three campaigns later with an entirely different squad. You yourself left about 18 months prior to the 1992/93 title-winning season.

So there you go. All United need to do is get their players to head down the pub to thrash it out and voilà: they’ll finish in the bottom half of the table before getting better by signing Eric Cantona and a load of other completely different players over the course of the next three or four years. Job done.

Bild me up, buttercup
When they’re back from the pub, United probably ought to put some January transfer window plans together. And The Independent think they have an idea who will be targeted.

‘Manchester United transfer news: Toni Kroos, Moussa Dembele, Saul, James Maddison, Mario Mandzukic latest’ reads their headline to that most glorious advent of football journalism: a live blog. Four of those players were named by the Daily Mail as being of interest to United on Thursday. But what of the fifth?

‘Manchester United are set to embark on a spending spree in a bid to turn around their wretched run of form,’ they tell us, adding that ‘German newspaper Bild say that United could turn to Toni Kroos, a target of former boss David Moyes, in the winter window.

‘They say that the Red Devils would be willing to pay upwards of £65m for the World Cup winner.’

Oh wow. Bild tend to be pretty reliable, certainly more than their SportBild cousin whose spurious stories are constantly misattributed to them. So United really are looking at spending at least £65m on a player who turns 30 pretty much as soon as the window opens?

They are not alone in this claim. None other than Sky Sports lead their European Paper Talk on the following:

But their line is that any Kroos deal would involve ‘working Paul Pogba into the negotiations’. So not a £65m bid but a swap. How weird.

A quick glance at Bild’s website – call Mediawatch cynical but we don’t believe for a second The Independent or Sky Sports have popped down to Germany for a paper – shows that they have published four stories on Kroos in October. Three concern his recent injury, and Zinedine Zidane’s request that he not play for Germany during the international break. The other crowns him ‘King Kroos!’ in a look at how the Spanish media reacted to his match-saving performance against Club Brugge in the Champions League.

Buried at the bottom of that story, from October 2, is the following paragraph, right at the end:

‘Recently, the Spanish press had injected something on Kroos, even reported a planned exchange with Paul Pogba to Manchester United in the winter transfer window. According to BILD information, there is nothing in this rumor.’

So it was ‘the Spanish press’ all along. It’s nothing to do with Bild. But that does beg the question: where on earth did that supposed £65m bid come from?

SportBild, of course, as we sadly suspected. In a story from September 14, no less. They said United ‘offered 75 million euros’ for Kroos. €75m just so happens to convert to £64.6m, or roughly £65m. But ‘offered’ sounds awfully past tense; indeed, that bid was rejected and ‘was the reason for his contract extension’ in May. So the offer that The Independent claim someone else has said will come to fruition in January has already been a) made and b) turned down.

And it is here where SportBild finally reveal the origin of this ridiculous transfer trail. They point the finger at ‘the Spanish journalist Eduardo Inda’, who made the claim on television station El Chiringuito. A month ago.

Why has all this resurfaced? Because BBC‘s gossip column continues to plumb new depths in the search of clicks they simply do not need, linking a five-day-old Sun article that attributes the story to Bild while literally sending us to SportBild. What an absolute mess.

Who is the worst culprit here? The Independent for reporting on a month-old story about a bid that was rejected ages ago? Sky Sports for ignoring Bild’s own insistence that the story was b*llocks, despite attributing it to them in the first place? SportBild for being silly sods? Eduardo Inda for starting it all? The Sun for randomly dragging it back up? Or BBC’s Gossip column for flogging a horse that had already been turned into glue and lasagne?

Scratch that: it’s Mediawatch for being led on this merriest of chases.

It’s about time. They are clearly struggling in *checks notes* sixth with only three clubs conceding fewer goals.

Superfluous feature of the day
‘Nine reasons why Liverpool can beat Manchester United’.

It took until about reason seven or eight, but the Liverpool Echo have finally convinced us a team top of the Premier League by eight points, having won their last 17 games in the competition, can beat the team in 12th that lost its last match to Newcastle.

The most pointless alternative table ever?
‘Leeds United top final Championship table according to bets placed this season’ – The Sun.

It turns out that Leeds have loads of fans and people have heard of them.

ICYMI earlier on…when he said it back in August.