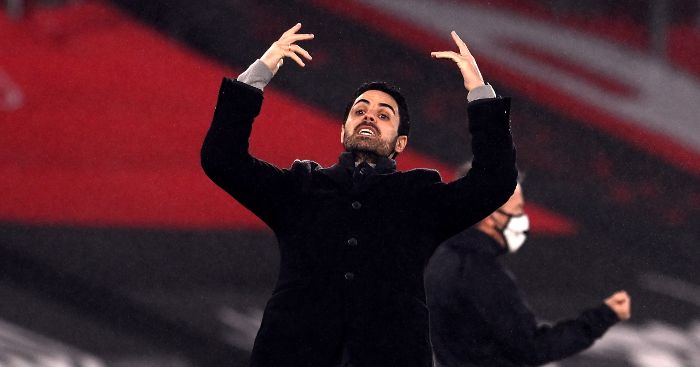 Tony Adams is worried at Mikel Arteta’s lack of experience “working with these kind of young players” after Arsenal beat Southampton 3-1 in the Premier League on Tuesday night.

Bukayo Saka and Emile Smith Rowe starred as the Gunners beat the Saints to move up to eighth in the Premier League table, only five points off the top four positions.

Saka was particularly impressive as he scored the second Arsenal goal and was a constant menace to the Southampton backline.

The England international now has three goals and two assists in his last six Premier League matches but Adams is worried that he could burn out under Arteta.

“I had a very good coach, Don Howe, one of the greatest English coaches of all time, and he knew when to take me out and put me in. Arsenal can’t afford that because these kids are our best players,” Adams told Stadium Astro.

“I think Arteta’s going, ‘just go and play’, but you have to watch that, you really do. You’ll get burnt out, your form will drop, your confidence could go.

“At the moment Saka is just going on to the football pitch and just playing. And if you haven’t got the experienced players around these kids they can get lost, they really can.

“We’ve seen Willock in recent years, players who have come in and initially come to life and then all of a sudden they lose their way and lose their confidence.

“It’s very important for the coach to actually know when to say, ‘have a rest today’. What Arteta’s done, and he did the same last year, he falls on a system, it works for him, and he kind of runs with it. I think that’s kind of dangerous.

“Don’t get me wrong, I think Arteta is wonderful and he’s going to be a top, top coach. I’d just prefer someone experienced in the camp. Whether it’s a sports director or an assistant.

“After playing the system we did last year and winning the FA Cup, it put a lot of plasters on the system of play. And it took 10 or 15 games before he’s gone to a back four. He’s got round pegs in square holes.

“I think the kid’s a wonderful player, I just hope he’s developed properly. At the end of the day, Arsenal are up to eighth and we’re climbing the league and your tendency is to keep playing these kids. And I think they’ll come unstuck.

“All the good players who are not playing now, like Willian, are saying, ‘well, they’ve gone in front of us’. So when they come in [they will ask], ‘am I going to be an understudy to this kid?’. I’d be knocking down the door saying, ‘why are you playing the kid for? Play me!’.”