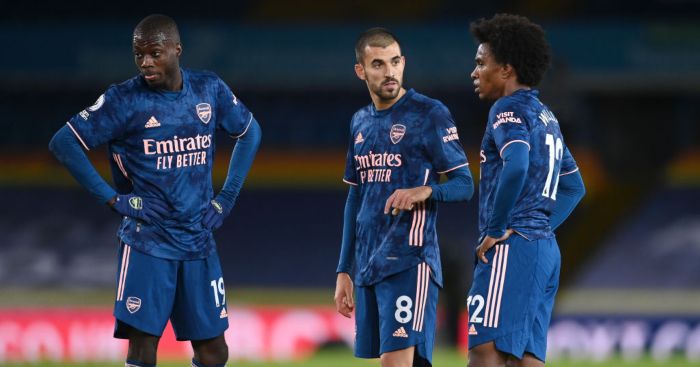 Tony Adams has questioned the signings of Nicolas Pepe and Willian at Arsenal after the Gunners’ “very average” display against Leeds United in a 0-0 draw.

Pepe struck the crossbar in a first half where Arsenal were largely on the back foot and the Gunners were under the pump even more when their winger was dismissed in the 51st minute after an apparent headbutt on Ezgjan Alioski.

Substitute Rodrigo hit the bar, Patrick Bamford saw a header come back off the post, while Raphinha’s strike from an acute angle hit the outside of the upright as Leeds settled for a point at Elland Road.

That point leaves Arsenal 11th in the Premier League table and Adams is concerned that his former club have been spending money in the wrong areas recently.

“The Leeds recruitment over the next couple of years is going to be so important, and it’s the same for Arsenal,” Adams told Stadium Astro.

“Bringing [Thomas] Partey in is an amazing recruitment. I think Arteta is doing a fantastic job, but I question recruitment and Willian, Pepe… did we need them?

“Do we fill up the wrong areas? Do we need a right-back? I think Gabriel is another inclusion who has been brilliant. I question letting Martinez go instead of Leno – although Leno by the way pulled off a fantastic save to his top right corner, so maybe he made me eat my words a little bit. I think recruitment is so important.”

Adams added: “We really missed Partey. That performance against Manchester United, and in particular having the quality and stature of Partey in that central midfield area, it just kind of gave other players license to go and play.

“We didn’t have that [against Leeds]. We looked very average. It was like an in-between performance between Aston Villa, where we got destroyed on the full-backs and Hector Bellerin in particular, and then the Man United game where we did amazing. So we’re inconsistent.”