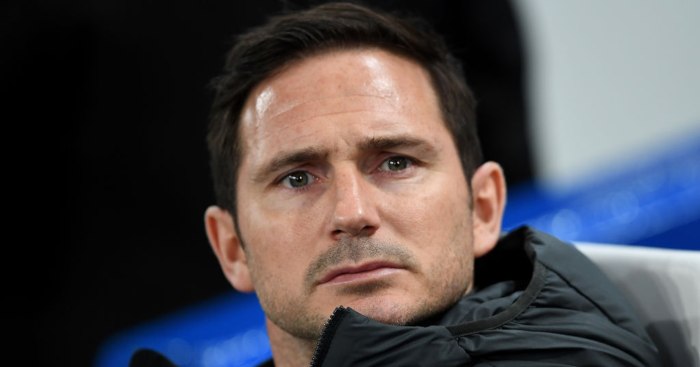 Tony Cascarino says he’s always found Frank Lampard “a little bit spikey” while the former Chelsea forward is “not convinced” of his management.

Chelsea were given a “reality check” on Tuesday night when they suffered a 3-0 loss to Bayern Munich in the first leg of their last-16 Champions League tie.

And Cascarino thinks Lampard has used the “easy excuse” of his squad being young when things have gone against Chelsea this season.

“It’s an awkward one with Frank, because we have had words before,” Cascarino told talkSPORT.

“Not bad, but I had a phone call and things were said.

“If I’m being brutally honest, I’ve always found Frank to be a little bit spikey with some of the things that you say, and you can be complimentary but Frank takes it slightly the wrong way.

“I’m not convinced by his management at times this year, because I do think it’s an easy excuse just to go youngster, youngster – he’s changed that team a hell of a lot.

“I don’t like the Kepa issue. He deserved to get dropped, but keeping him out of the team – I’m not so sure that’s a good decision.

“You have to show loyalty to players sometimes, even after a bad game.

“But it’s happening all over the pitch, everywhere has been changed, everybody has been changed around. It’s really hard to guess Chelsea’s XI and that tells you in some way that Frank is spinning plates around his team.

“We’re giving him the benefit of the doubt because he’s new to this role of a Premier League manager and Chelsea have been in a very difficult situation where there’s been a lot of change and no buying power.

“I can’t see [how that can improve] unless you buy new players, but you’ve also got to look at your system.”