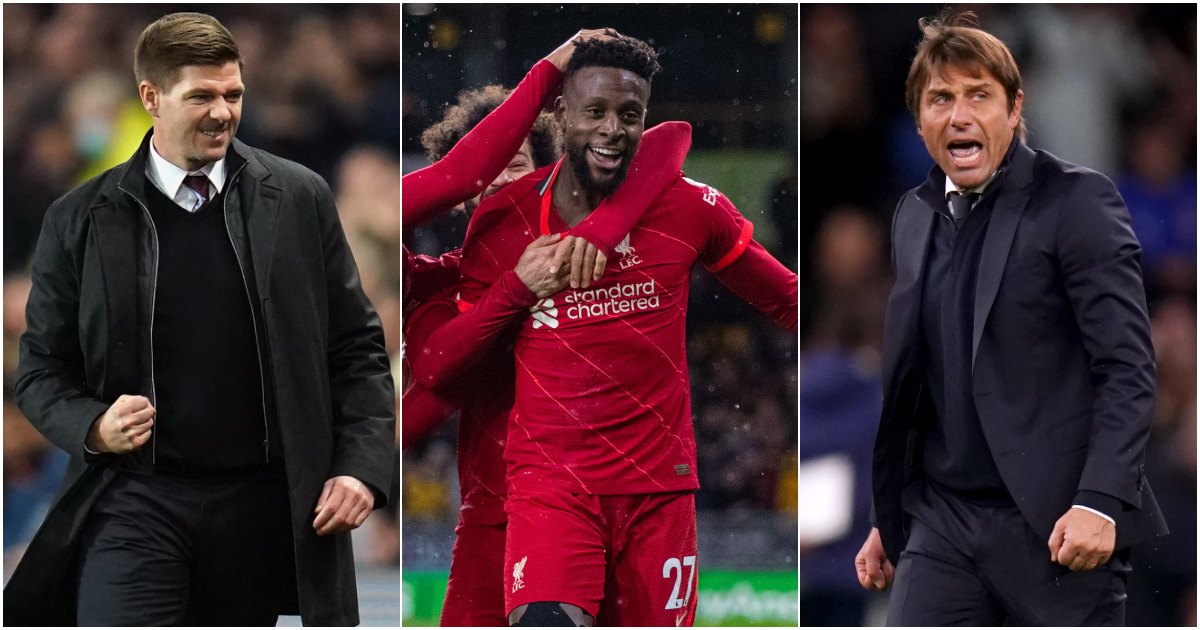 We took a look at the 10 biggest mistakes of the Premier League season a while back, but what are the big calls teams have got right? They were these ones, right here…

10) Wolves resist the urge to panic
Losing your first three Premier League games without scoring a goal is a sub-optimal start for any new manager. That swiftly became four defeats in the first five for Bruno Lage and Wolves, but at no point did there ever appear to be any grave concern or panic within the club.

Those first three defeats were all by a solitary goal and against teams – Leicester, Tottenham, Manchester United – that also helped keep panic at bay. Not one of those performances or even results was a huge disaster in isolation, and there was always enough about Wolves in those games to see how a corner could quite easily be turned.

But that’s far easier said now with Wolves sat very comfortably in eighth and in touching distance of possible European spots after a run of six wins in nine games. Goalless draws against Norwich and Burnley have slightly dampened the mood, while the late, late defeat to Liverpool was a kick in the gut. With Manchester City up next and Chelsea a week later, Wolves may once again have to hold firm against a run of results that might easily provoke panic elsewhere. There is little reason to fear it here, though.

9) Arsenal continue their haphazard transfer policy
Edu has had a curious reign as Arsenal technical director, combining some extremely canny additions with enough wildly off-kilter buys to suggest that there is no actual long-term strategy in place at all.

A welcome side-effect, though, has been the need to lean on the academy: Arsenal have the youngest side in the Premier League this season and Bukayo Saka and Emile Smith Rowe have been given even greater opportunity to establish themselves as senior players than they could possibly have imagined. Both have grasped that chance, as had Gabriel Martinelli before suffering yet another in a long line of injury setbacks. Even Eddie Nketiah is back in the frame.

They are still a side in transition and still so, so fragile. Sticking by Mikel Arteta also looks more of a risk than it did a few weeks ago; he is clearly the best of the three former players entrusted with Big Six roles over the last few years, but the significant upgrades in the dugouts at Spurs and United does ramp up the pressure again. But there is a definite sense of something happening with the abundance of talented youth at his disposal.

8) Graham Potter turns down Spurs (allegedly) to stay at Brighton
There are some troubling signs of Brighton returning to their xG banter mean, but overall this has been another season of development and improvement for both their squad and manager. Taking one look at the basket case of Spurs this summer and deciding he was well out of it was a shrewd move, and one that wasn’t necessarily easy. The temptation to transfer his obvious coaching talents to a squad containing a couple of players better able to capitalise on all the chances must have been considerable, but for a manager still building a reputation it also had the potential for significant career damage. Nuno Espirito Santo isn’t getting another top job in a hurry, is he?

Potter, though, is sure to still be in the thoughts of any club considering a change. And that’s assuming Potter even has any inclination to move on anyway.

7) Manchester City swerve Harry Kane
The price was silly and City were right not to pay it. They should still have signed a striker – for the reasons outlined in this feature’s companion piece – but they were undeniably right not to throw all the money at Spurs. The curious thing is that Spurs were probably right not to accept the offer that was made for him, which significantly undervalued him.

The loser in the whole escapade was Harry Kane, who still looks a touch lost and confused even as Antonio Conte lifts the mood everywhere else at the club. The fun thing about Kane’s season is that it can be described in different ways to suit your purposes. Quite rightly, everyone wants to focus on the fact he is looking really quite sh*t, ergo his stats are one goal from 13 games. He can also quite accurately be said to have scored 18 goals in 28 games. Football, eh.

6) Manchester United sign Ronaldo
This should be obvious, but there remains a weird amount of coverage suggesting that this was not a good idea or that it has created problems for United. They haven’t been very good for large swathes of this season, but it’s hard to imagine not having one of the best players of all time would have improved matters. This has also seen an absurd and entirely concocted tabloid narrative arc in which Ronaldo apparently emerged triumphant as a Rangnick hero having been a non-pressing albatross around the new interim manager’s neck a few days earlier. Neither of these things were true before or after a perfectly adequate but unremarkable by Ronaldo standards display against Crystal Palace, yet it dominated the back pages before, during and after a weekend in which three teams led the Premier League.

Signing players to stop your rivals getting them is also not generally a sensible way in which to operate a top-tier football club, but it should also be pointed out that Ronaldo would have scored about a million goals already for City had United not stepped in.

5) Newcastle appoint Eddie Howe
Everything has felt vaguely chaotic at Newcastle before during and after the Saudi takeover. The more dispiriting elements of it were covered in the opposite number here, but they also dallied over the dismissal of Steve Bruce. That, like so many of the errors Newcastle’s new owners made, appeared to be a result of second-guessing themselves over how to win hearts and minds. Binning the current manager too quickly might have appeared unseemly, but they failed to read the room. He had to go, and Newcastle couldn’t afford to sacrifice the Spurs game as they did in the position they are in.

But having finally jettisoned Bruce the one thing they did do well was identify a solid replacement. Above all it was a sensible replacement. Neither overreaching and trying to run before they could walk, nor a definite stopgap doomed to failure. Eddie Howe is a proven operator in the bottom half of the Premier League, but gets his teams playing ‘proper’ football and could prove himself capable of hitting greater heights with greater resources. An appointment that improves things in the short term, but could also be a long-term solution. And if it isn’t, they can just throw some more money at it.

4) Liverpool show faith in Jota and Origi
It’s not huge news to say that Liverpool’s first-choice front three is pretty good, but it’s also been the same three for a good few years now. However difficult an upgrade might appear, there is always a risk of things going stale. But somehow, Liverpool have managed this situation with aplomb.

Diogo Jota’s promising first season at Anfield was cut short by injury but he has already proved his worth once again this season with eight Premier League goals in Roberto Firmino’s absence. But more interesting, in his own way, remains Divock Origi. He is the ultimate luxury super sub, a player who appears perfectly happy with a clearly defined role – and one at which he excels. When it looked like Jota’s miss against his former club would cost Liverpool dear, up popped Origi with a late winner. It was his second Premier League goal of the season – one more than Harry Kane – despite only seeing 38 minutes of action and despite his oft-mocked bit-part status, was far from being the first hugely important goal in what is an unconventionally yet undeniably successful Liverpool career.

3) Manchester United appoint Ralf Rangnick
Dropped a place for being far too stubborn and taking far, far too long to dispense with an increasingly bewildered Ole Gunnar Solskjaer due to a firmly-held but long outdated and disproven belief that they are Manchester United and somehow different to those other clubs who change managers a lot.

But while they might have taken too long to do it, they’ve certainly done it well. Ralf Rangnick is a high-calibre appointment anyway, one who will surely bring short-term improvement to a squad brimming with talent. It’s also, though, a tricky-to-achieve interim with continuity. Rangnick will shuffle upstairs at the end of his management stint having given United time to get the next full-time appointment right and without having to tear everything up and start again. The title may have gone, but this season remains far from a write-off now a proper manager is in charge of a team still firmly in the top-four hunt and well placed in the Champions League.

Michael Carrick did an admirable job in his short spell as caretaker manager, and his total departure from the club was a shock. But if it sets him off on a full-time management career starting a bit further down the food chain and working his way up then it will definitely be the best decision for him, and quite possibly for United too. There might well be a qualified and capable former player candidate the next time they embark on a fit of damp-eyed nostalgic yearning for the good old days.

2) Aston Villa appoint Steven Gerrard
I’m absolutely 100% all in on Steven Gerrard, football manager. Already beyond convinced he’s going to be a great manager. There’s a hard-to-define but undeniable authority to him that is/was almost totally lacking from most of the other storied former players who’ve had a go at Premier League management over the last couple of years.

There was a brutality to Dean Smith’s axeing after all the good work he’s done for the club, but it was also necessary. He didn’t appear able to find any way to move Villa on from the Grealish Era, and there was little evidence he was about to hit on the formula as defeat stacked upon defeat.

Gerrard has already made Villa look a far more formidable and far more sturdy football team. It may very well still be true that how far Gerrard can take Villa on their journey depends very much on how long it takes for the Liverpool job to become available, but that isn’t something to worry about too much now. Indeed, Villa fans should hope Gerrard’s next job is Liverpool manager. Almost by definition, it means he will be leaving Villa in decent shape.

1) Spurs appoint Antonio Conte
There’s a temptation, as with United, to drop this down a place or two on the basis that the sheer scale of the upgrade owes much to previous poor decisions on the part of Daniel Levy and co.

But really, that would be churlish. This would have been a monumental upgrade even when it was touted in the summer – that Spurs could pull it off three months of further shambling later was even more extraordinary. This was an astonishing coup and instantly transformed Spurs’ standing. This was a club drifting, seemingly inexorably, out of the Big Six and back to mid-table mediocrity. Now, at the very least, they have prospects. Results – albeit from some favourable fixtures – have already improved and there are notable improvements in performances both individual and collective.

And even when, as history suggests is inevitable, Conte does huff off into the sunset at some point over the next two years, he will leave Spurs far better off than he found them and serve as a first-rate Date Ladder.