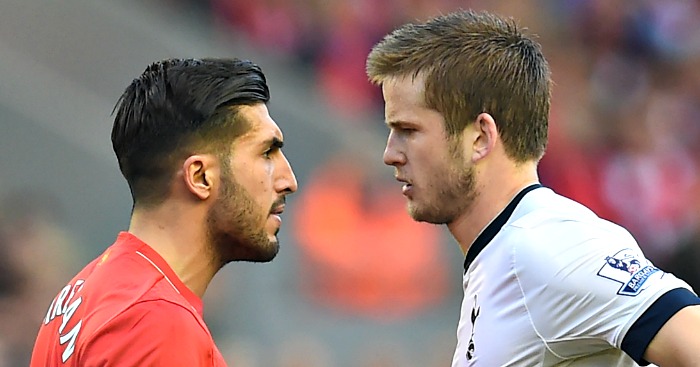 You’ve feasted upon your goalkeepers and defenders, so now it’s the turn of the defensive midfielders. The rough rule is that if you play in the ‘2’ of a 4-2-3-1, you’re eligible. Don’t worry, Dele Alli will be along next week…

10) Fernandinho (Manchester City)
Despite Manchester City’s regular defensive rickets this season, it would be unfair to tar Fernandinho with the brush of calamity. When you’re more often than not playing alongside Fernando (woeful) or Yaya Toure (definitively not a holding midfielder), ahead of Nicolas Otamendi, Eliaquim Mangala and Martin Demichelis and near Aleksandar “Track back? Did you say track back?” Kolarov, the temptation must be to throw up your arms and go on strike.

Like Schneiderlin further up this list, you can’t help but wonder how good Fernandinho would look if he had an actual, functioning defensive midfielder alongside him. The Brazilian basically paid the price for City’s attacking magnificence in 2013/14 (they still conceded 37 league goals), leading Manuel Pellegrini to assume that Fernandinho could continue to do it all by himself. He cannot.

9) Etienne Capoue (Watford)
The blossoming partnership between Troy Deeney and Odion Ighalo has taken the vast majority of the Watford praise quota this season, but behind them Capoue has busily been improving a damaged reputation.

“I started a zero when I came here,” said Capoue in December, whose £6m signing from Tottenham broke the club’s transfer record at the time. “I wasn’t good enough for him [Mauricio Pochettino] and that’s no problem, that’s experience for me. I start at zero and Quique Sanchez Flores gave me the chance.”

The favour has been repaid handsomely, along with the transfer fee. Capoue has been a one-man wall when at his best, making more tackles and interceptions than any other Watford player. He’d also started every Premier League game before the defeat to West Ham on April 20.

“He’s a new player today which is very good news for us, to incorporate this type of player,” says Flores. “It’s amazing to observe that this player is going to play football, to organise, to stop players, for us it is good.”

8) Yohan Cabaye (Crystal Palace)
It’s a modern romance taken straight out of Hollywood, the straight-talking Cockney ruffian who wins the heart of the smooth, sensual Frenchman. We can imagine Alan Pardew now, staring across the Selhurst Park dressing room and mouthing “Tu es mon âme soeur” at his midfielder.

Having broken the club’s wage structure to sign Cabaye in the summer, Pardew promised big things from his former subject. “If you increase the wage structure because someone has come in and they don’t deliver, then you have got a problem,” he said in October. “But they can all come and knock on my door on Monday and ask for more money, saying ‘I want Yohan’s money’, and they’ll get a simple answer: ‘You’re not as good as him’.” Charming.

Fortunately for Pardew, Cabaye has been largely enjoyed by Crystal Palace’s supporters. Not only was his excellent passing repertoire a key part in the club’s autumn joy, but he’s done the dirty work too. Cabaye has made 107 tackles in the league this season; Palace’s next best is 62.

“Another masterclass from Yohan Cabaye,” Pardew said in December. “If you want to see a midfielder in the Premier League passing, heading, tackling, being frantic when you need to be, he did everything today.” Someone stick on the Serge Gainsbourg CD.

7) Morgan Schneiderlin (Manchester United)
The first of only two players on this list who also made last year’s, yet Schneiderlin’s three dropped places indicate that his first campaign as a Manchester United player has hardly been a roaring success.

There are two distinct reasons for that. Firstly, Louis van Gaal inexplicably excluded Schneiderlin from his starting team for a number of key fixtures: Liverpool (h – Europa), PSV Eindhoven (a), Arsenal (a), Wolfsburg (a), Leicester (a) and Chelsea (a). United’s record in those six matches was three draws and three defeats.

The second factor was a lack of regular partner. The biggest achievers this season (Leicester, Tottenham and West Ham) have all relied on a central midfield partnership: Kante and Drinkwater, Dier and Dembele, Noble and Kouyate. Schneiderlin has been joined by one of a fading Bastian Schweinsteiger, an ageing Michael Carrick or an ineffective Marouane Fellaini. Even at Southampton, Schneiderlin had Victor Wanyama for support.

Fix that second issue this summer, and Schneiderlin could easily make the top three next season. Protecting a defence is a damn difficult job when you’re doing it alone.

6) Mark Noble (West Ham)
The vociferous campaign among West Ham supporters for Mark Noble to play for his country has actually ended up being detrimental to his reputation. Rather like Ryan Shawcross at Stoke, it undersells his excellent domestic form as ‘still not quite good enough’. There’s nothing wrong with being one of the best players for a team that could still finish fourth in the Premier League.

So forget England for a minute, and stop putting a grey lining on a silver cloud. The easiest way to understand Noble’s importance to West Ham is to listen to Slaven Bilic, for it’s hard to imagine more thorough and effusive praise:

“If we are going to talk about Mark we will have to talk for a long time, not only today but the way he trains, plays and behaves since the start of the season – he is basically unbelievable. His personality, not only his captaincy, his role and the number of yards he runs. With the ball he is exceptional. I knew he was a good player who would give you everything on the pitch and run like crazy but he has surprised me.”

5) Santi Cazorla (Arsenal)
Detailing the causes of Arsenal’s failure this season would result in a longer list than a spoilt child’s requests to Father Christmas. Replace only one letter of the ‘Dear Santa’ introduction to reveal the most important factor: Arsenal sure miss their Santi.

We exclaimed our own surprise at Cazorla’s place at No. 3 on this list last year, but the Spaniard had excelled in a deeper role. He continued that form into this season, until a knee injury and Achilles problems caused him to miss the majority of the season. Where would Arsenal be if he had started 34 league games rather than 14?

Cazorla is hardly a defensive midfielder in role, but is by position; the growing excellence of Mesut Ozil correlated exactly with him being able to orchestrate from deep. For evidence of Cazorla’s defensive responsibility, see his quotes on Arsenal’s collapse this season:

4) Eric Dier (Tottenham)
Can you have a top four comprised entirely of players from two clubs? Yes, you really bloody can. Both Leicester and Tottenham have a solid goalkeeper, magnificent central defenders, much-improved full-backs, a creative influence and an in-form goalscorer, but the success of both has been achieved mostly through their central midfielders.

First comes Dier, whose transformation from central defender to disciplined holding midfielder might just be the most notable achievement of Mauricio Pochettino’s season. Having been primed for the role in preseason, by March Dier was scoring the winner for England against Germany in a defensive midfield role. Euro 2016 outsider has become dead cert.

“We have to be thankful for our manager [Pochettino], for being able to put us in this position by giving us a chance at our club and improving us,” said Dier after that goal. “Obviously us Spurs boys know how lucky we are to have him because he’s been brilliant for us.”

Dier only turned 22 in January. Permission to giggle uncontrollably and dream of happy England times?

3) Danny Drinkwater (Leicester City)
Drinkwater would never admit to such thoughts, but you would forgive him for feeling slightly miffed. Having enjoyed the season of his life, he’s still viewed (understandably) as Leicester’s other central midfielder. Why Drinkwater when you can quaff Champagne?

That said, Drinkwater has been pretty brilliant in his own way. Among Leicester’s players, he ranks second for tackles made, first for passes made, fourth for chances created, second for goals assisted and fifth for clearances. He also runs further than the Energizer bunny (though still less than Kante). There’s not much wrong with being the Jack of all trades when the business is winning titles.

2) Mousa Dembele (Tottenham)
Most improved player of the season? Oh yes. Surprise performer? Big time. Unlikeliest lynchpin of a title-challenging team? No, because Leicester. Best defensive midfielder of the season? Not quite, for exactly the same reason.

If we had extended last season’s list to 100 from the original ten, Dembele might have squeezed in towards the bottom of the pile. He started ten league games in total, only six of which were in a deeper role. Dembele looked like he would be the first cab off the Tottenham rank last summer. “After my holidays, I’ll talk to the boss about my future at Spurs. We will see,” was his own short assessment.

Ten months later, and Dembele has been one of the stars of Tottenham’s title challenge. Having started on the opening day against Manchester United on the right of midfield, Dembele moved centrally to support Eric Dier and immediately looked like he’d been born to play the role. The standout statistic is this: Tottenham’s league record when Dembele has started in central midfield this season reads Played 25, Won 15, Drawn 10, Lost 0.

1) N’Golo Kante (Leicester City)
Kante’s performances this season are best equated to the final baddie on a computer game, one who never runs out of energy and armour and one who leaves you with blisters on your fingers and a distinct lack of social life before turning the console off and muttering under your breath. “Stupid bloody game, why make something you can’t beat?”