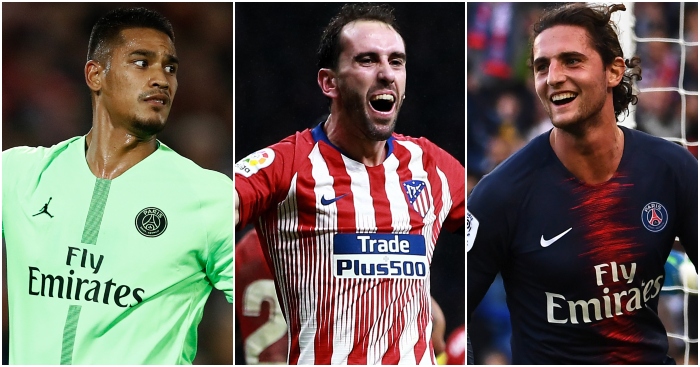 10) Alan Dzagoev
The Russian playmaker was once linked with the likes of Manchester United and Real Madrid, but his star has undoubtedly fallen in recent seasons. The World Cup was his shop window but a hamstring injury meant he played only the first and last few minutes of the hosts’ campaign; all the while Aleksandr Golovin hogged what was once his limelight.

Dzagoev will be 29 by the start of next season and if he is ever to leave the comfort of CSKA Moscow, it has to be soon. The interest there once was may have largely disappeared and injuries have certainly played a part in the versatile attacker not fulfilling his potential, but still there will be clubs willing to take a punt.

9) Mario Balotelli
Some players seem to miraculously find another gear when contract renewal time is looming but, of course, Balotelli is different. The Nice striker is doing his prospects of a pay rise or a big move no good whatsoever while he continues to search fruitlessly for his first goal or assist of the season.

After describing him as out of shape at the end of last month, his manager Patrick Vieira said his contribution last week in the 1-0 win at Nimes was “less than average”, As you might expect, Balotelli’s reaction to jeers as he was replaced 15 minutes from time was not to clap the crowd and vow to be better next time. So where does he go from Nice? You know there will be at least one Premier League chairman willing to bring the circus to town…

Mario Balotelli: Is averaging more shots per game (3) than any other player of those yet to score a goal in Europe's top five leagues this season

8) Eduardo Salvio
There appears to be a queue forming in Italy for the Argentina winger, with Inter joining Roma, Lazio and Napoli in tracking the 28-year-old. Inter apparently see Salvio as a cheaper alternative to Fiorentina’s Federico Chiesa or Anthony Martial. He certainly would be that…

The former Atletico Madrid winger has scored 60 goals and offered 54 assists since moving to Portugal in 2012. But it is only in the last year that he has caught his national team’s eye. Salvio began the World Cup as an Argentina starter before being hooked in the miserable defeat to Croatia and spending the rest of the tournament on the bench.

7) Yacine Brahimi
The Porto attacker is attracting plenty of interest from mid-tier Premier League clubs, with Everton, Newcastle and West Ham all recently linked with the 28-year-old. Indeed, Record claimed the Hammers made a £30million offer last summer which was accepted – of course it was – but the player opted to wait before making his move.

The Paris-born Algeria international had his most productive season for Porto last year, scoring nine goals and creating seven more, but that is the closest he has ever come to breaking into double figures in a league season. West Ham may be tempted to make another bid in January before the scramble for a freebie really starts in earnest.

6) Munir El Haddadi
Since Pedro departed for Chelsea, Barcelona have struggled to find a striker capable of serving as back-up to Lionel Messi, Luis Suarez and Philippe Coutinho, and El Haddadi – with 11 goals in 53 Barca appearances – has had no more joy than Sandro Ramirez or Paco Alcacer. Barca have offered Munir a payrise but not enough for the 23-year-old to recommit and, with other options, the club hold a strong bargaining position.

So unless some common ground can be found, it seems the forward is heading for the exit. Udinese have been linked with Munir, who was a regular on loan at Alaves last season. Back at Barca, this term has offered only 136 minutes and one start – the miserable defeat to Leganes. The most headline-grabbing act of his season was refusing to pay the £14k bar bill at his birthday party in September.

5) Rafael
The former Manchester United right-back is approaching the end of the four-year contract he signed with Lyon after being sold, to the bemusement of some United fans, as a consequence of Louis van Gaal’s suspicion of Brazilian players in 2015. Rafael spoke in the summer of his willingness to extend, but with Kenny Tete and Leo Dubois in their ranks, Lyon are in a strong position to haggle with the 28-year-old.

Despite the competition for his place, though, Rafael has made the most starts of any of Bruno Genesio’s right-backs. If he is to leave, Lazio are among the early frontrunners for a Brazil international with Champions League experience and three Premier League winner’s medals.

4) Hector Herrera
The Porto star, capped 70 times by Mexico, has long been talked about as an Arsenal target, but the Gunners finally appear well-covered for combative midfielders. Tottenham have also been tracking Herrera with Mousa Dembele seemingly on his way, while Crystal Palace are among the 28-year-old’s suitors.

But there is also strong interest from Italy. There isn’t a free agent Inter don’t want and Roma too are always on the look-out for a bargain. The Porto captain is reportedly most likely to head to Serie A or remain in Portgal, but that won’t stop Premier League clubs being linked with Herrera in the coming weeks.

3) Alphonse Areola
“It is sad to see a club like PSG play a 40-year-old goalkeeper while you have a 25-year-old Areola who meets all expectations.” That was the view of Chelsea goalkeeper coach Christophe Lollichon, who reckons the France stopper is better than Hugo Lloris and claims he wanted to join the Blues last summer.

But Areola stayed in Paris to work alongside Gianluigi Buffon and the younger keeper has started more games than the veteran. Buffon has a year remaining on his contract with the Ligue 1 side, but Areola’s is running down quicker. The Parisian’s form this season is likely to have eased whatever doubts the club may have had over his long-term prospects but with free agency looming, PSG may also have left it too late. And, yes, Inter are interested…

2) Diego Godin
The Uruguay defender played the oldest trick in the book during the summer when he used Manchester United’s desperation as leverage in negotiations with Atletico Madrid over a new contract. It seemed to work a treat, with United supposedly left seething over being used yet again, but the contract between Godin and the Rojiblancos was never signed.

So as January approaches, United, Godin and Atletico are reported to be doing the dance all over again. Aged 32, his next contract will be the centre-back’s last big deal, certainly in Europe, so Godin is prepared to play the long game while seeing just how much Jose Mourinho can persuade Ed Woodward to spend on adding some woefully-lacking steel into his defence.

1) Adrien Rabiot
The big hitters across Europe are watching the clock tick down on Rabiot’s contract, with Manchester City, Liverpool, Barcelona and Inter Milan all keen to scoop up the France midfielder from PSG. Juventus love a freebie and the Old Lady is sniffing too, but PSG haven’t given up hope of persuading the 23-year-old to stay put.

City are especially keen to sign a holding midfielder and the Premier League champions hold an ace courtesy of having already developed a relationship with Rabiot and his mum, who also acts as his agent. Rabiot spent a year on City’s books as a schoolboy but wee Adrien was allowed to return to France to cure his homesickness. Even though it didn’t work out, the player hasn’t forgotten how welcome he  was made to feel as a 14-year-old in Manchester.

But then there’s Barca…