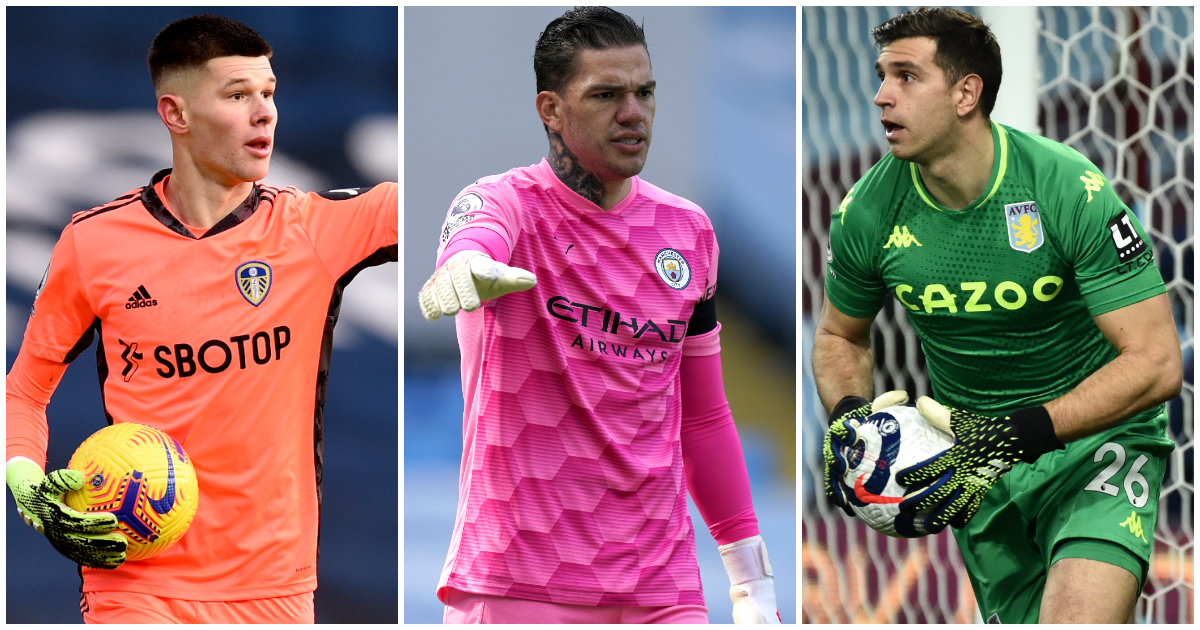 More than half of these goalkeepers were Premier League rookies at the start of the season. Including our number one No.1..

10) Kasper Schmeichel (Leicester City)
The Leicester keeper has had a satisfactory season by the high standards he has set in the Leicester goal for the last decade. His 65.7% save ratio ranks him low in the division, while the Dane has conceded 0.5 goals fewer than his expected goals conceded total. Enough for Dion Dublin to name Schmeichel as his Premier League Player of the Season. Maverick.

But his heroics in the FA Cup final means the 34-year-old’s contribution this term will live long in the memory. His save to touch Ben Chilwell’s header onto the post was special; the stop to parry Mason Mount’s late thunderbolt was something else.

9) Hugo Lloris (Tottenham)
Spurs have had a miserable season and though there is talk of replacing Lloris in the summer, things would have been even worse without the France captain.

Only two keepers have a higher save percentage this term, which is handy for Tottenham given the shambles Lloris has had to watch in front of him every week.

The 34-year-old is approaching the final year of his contract but with something of a rebuild coming for Spurs, retaining the experience of their World Cup-winning skipper would seem to make sense.

8) Eduoard Mendy (Chelsea)
The Chelsea new boy keeps goal in Gary Neville’s team of the year and while Mendy has been impressive since his arrival from Rennes, simply not being Kepa is not reason enough to bump him higher up this list.

But Neville is right in that Mendy has been ‘a big part’ of Chelsea’s defensive improvement. Even under Frank Lampard, Mendy’s impact was clear. Immediately, Chelsea looked calmer at the back, with Lampard describing the Senegal stopper as ‘low maintenance’.

Mendy has hardly performed heroics – xG suggests he’s stopped roughly the number of shots he ought to have – but his competence where before there was calamity has been a huge factor in Chelsea’s rapid progress under Tuchel.

Most clean sheets kept in a Champions League campaign:

Mendy could equal the record in the final. #UCL pic.twitter.com/lIObAE8t3X

7) Nick Pope (Burnley)
No keeper has a better save percentage than Pope, with the Burnley stopper having kept out 77% of the 148 shots on target he has faced.

His form has made him a leading contender to keep Gareth Southgate’s goal at the European Championships, and on the basis that it takes one to know one, Paul Robinson reckons he should get the gloves: “For me, he is a better goalkeeper than Dean Henderson and Sam Johnstone.” The question is whether knee surgery will now keep him out.

6) Robert Sanchez (Brighton)
The Brighton keeper started the season as Brighton’s third-choice keeper having spent the previous campaign on loan at Rochdale. Come March, he was in the Spain squad.

Sanchez offered Graham Potter a safe pair of hands when Mat Ryan’s wretched form eventually cost him his place in mid-December. Since then, Potter’s ‘monster’ has kept clean sheets in 37% of his appearances – only three keepers have a better record.

5) Sam Johnstone (West Brom)
West Brom are Championship bound but their goalkeeper won’t be making the return journey with them.

No keeper has conceded more goals than Johnstone, but neither has anyone else made more saves than the England international’s 161 stops.

Johnstone has been peppered behind a ropey Albion defence but his form means he will most likely remain in the Premier League. Manchester United were said to be keen on re-signing their academy graduate but the 28-year-old is too good to be sat on the bench. West Ham seems a more likely destination, with the Baggies said to be looking for around £20million.

4) Illan Meslier (Leeds United)
Leeds have also been linked with Johnstone but that would be a curious move on Marcelo Bielsa’s behalf after Meslier’s maiden season in the top flight.

The French keeper has been a busy boy this season after taking the gloves from Kiko Casilla. Only Johnstone and Aaron Ramsdale have faced more shots and made more saves.

In February, Meslier broke Joe Hart’s record for clean sheets under the age of 21. Eleven shut-outs have earned the former Lorient keeper a France Under-21 call-up for the summer’s European Under-21 Championships, which caps a remarkable rise for a youngster who prior to this season had only 38 senior appearances in the English and French second tiers.

3) Alphonse Areola (Fulham)
Fulham’s biggest problems this season have not been at the back. Seven keepers have conceded more goals – but Areola’s form is the biggest factor in that statistic.

In terms of xG, Areola has kept out 7.6 goals that he might be expected to have conceded – the Premier League’s best-performing keeper in that metric.

With Fulham returning to the Championship and Areola apparently not keen on returning to PSG, the 28-year-old will make a very astute signing for someone this summer.

2) Ederson (Manchester City)
The Manchester City stopper retained the Golden Glove award with 18 clean sheets, and while shut-outs are hardly the most conclusive proof of a goalkeeper’s contribution, there is no dispute over Ederson’s influence on the champions.

As Pep Guardiola put it, the Brazilian is tailor-made for his City team. “We cannot have a better goalkeeper than Eddie,” Guardiola said a fortnight ago after Ederson played a creative role in the Champions League win over PSG. “He suits perfectly our way of playing. The impact he has on the team is massive.

“His composure and the way he faces the good moments and bad moments is remarkable.”

Ederson benefits from having a coach willing to forgive any errors while trying to play out from the back, but the keeper’s calmness in possession is remarkable. There remains room for improvement – for example, Ederson can be rash in rushing from his line for one-on-ones, which is a concern behind a defence that plays so high. But the City stopper, along with Ruben Dias, has played a major role in helping solidify a City side that last season was porous at crucial times.

1) Emiliano Martinez (Aston Villa)
Arsenal had a straight choice last summer between Martinez and Bernd Leno. They got it wrong.

In fairness, at the time, it was the easiest decision to justify. Leno is a Germany international with a stellar track record. Martinez was impressive as a stand-in towards the back end of last season but it would have been a brave call to bomb Leno in favour of a goalkeeper who has spent the vast majority of his career in the wings.

But how Martinez has grabbed his chance to shine at Villa! The Argentina ace has been pivotal in a hugely positive season for the Villans, with Martinez equalling the club’s clean sheet record. Only Ederson and Mendy have recorded more shut-outs, which is astonishing given just how poor Villa were defensively last season.

Martinez also has the second-best save percentage record – just 0.2 behind Pope – and xG suggests Villa would have conceded 7.4 goals more had the £20million signing not been so impressive.