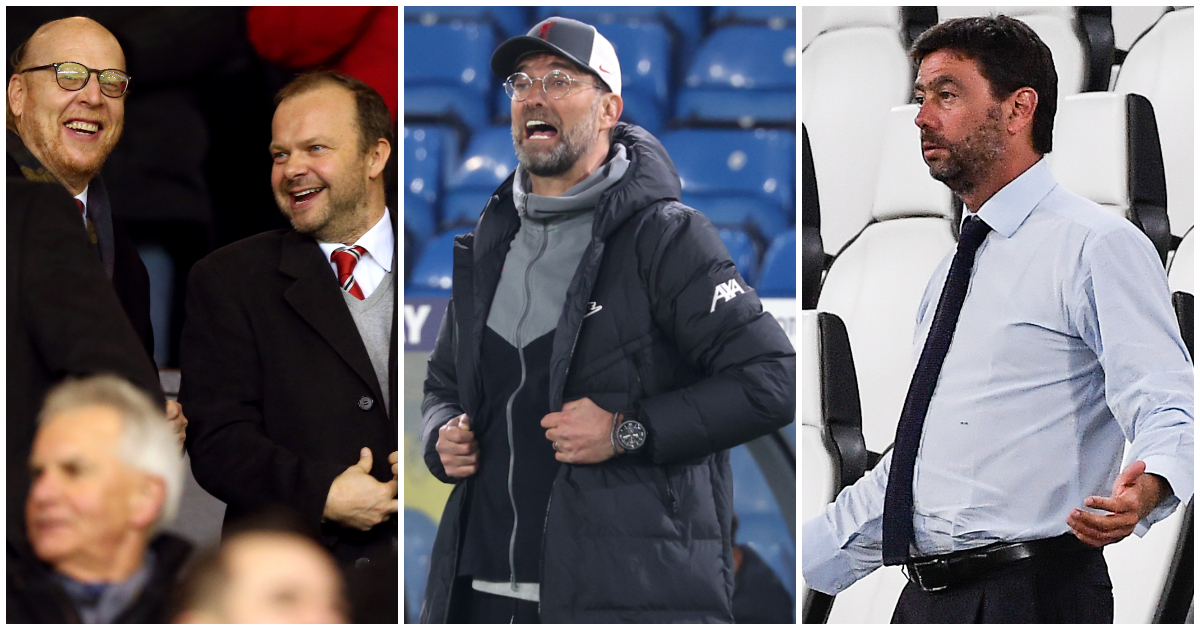 We all knew to expect the mealy-mouthed apologies. More surprising was Florentino Perez getting down with da yoot…

1) The owner apologies.
Or the non-apologies. You decide. John Henry did a pretty (in)decent job of a measured straight down the camera look with a couple of pauses for extra effect. Was he thinking of all those lost bucks? We cannot measure his financial heart rate from here, but those glasses were not steaming up with emotion.

Then there was Joel Glazer’s open letter. At least we know what he looks like after 15 years.

Honey. I shrunk my club.

2) Getting John Barnes on to talk about the real issues
Barnesy is quite, what’s the word…. peripatetic, on football’s issues of the day. He’s the go-to man, even for Julia Hartley-Brewer: “This was all about two elite groups. It was never about the fans.”

While we are all busy celebrating people power, fan power, common people power et al, Barnes moves the conversation to a level that makes us feel like we are intellectually challenged. In his breathless soapbox style, JB reminded us that most lining the streets of Fulham Broadway in protest on Tuesday still won’t get into a single Chelsea match. “The clubs are in this situation because of players’ salaries. Will they be capped to help fans buy tickets? I don’t think so.”

3) Big six putting out statements written by a PR algorithm

I’ve read this 3-4 times now . Quite possibly the worst communication I’ve ever seen in my life! https://t.co/C0Rc8dsUWq

While most of the dirty dozen leapt off the Golden Gate bridge one by one to atone for their sins, there was something rather spurious and soulless about certain club statements. Take the following: “Manchester City Football Club can confirm that it has formally enacted the procedures to withdraw from the group developing plans for a European Super League.”

Wot? Chelsea followed: “As reported earlier this evening, Chelsea Football Club can confirm that it has begun the formal procedures for withdrawal from the group developing plans for a European Super League.” Okay. We get the formal business speak with the headed paper, but we are humans, not androids.

4) Club social media accounts taking the p*ss
The merriment kicked off on Monday, much to the chagrin of Jurgen Klopp with those provocative t-shirts. It ended up with the rather churlish Leeds social media team coming up with “#LUFC hold Super League side Merseyside Reds to a 1-1 draw after late Llorente equaliser “ You’ve got to laugh otherwise you will be accused of a sense of humour bypass.

Wolves took the prize for a more deadpan approach, claiming the Premier League in 2018/19 when they finished seventh.

It's probably too late for a parade 🏆🥳 pic.twitter.com/qEc24zBb7l

Southampton joined the fun but it was kinda done and dusted by then.

On behalf of the 2014/15 champions, we would like to extend our congratulations to you 🤝 https://t.co/3eQO4GXYJV

5) GNev and Klopp clash
There’s always a mini storm brewing when Neville talks too much about Liverpool within earshot of Klopp. That’s the same Jurgen who pretends he doesn’t listen to TV or pundits.

“I wish Gary Neville would be in a hot seat somewhere and not where the most money is,” blasted the German as Neville, quite riughtly, insisted that he had given United as much stick as the Reds in respect of the European Super League on Sunday’s Sky Sports. “I don’t know why I’m living in his head, to be honest with you” retorted Neville.

Herr Klopp previously had run-ins with G-Nev over prioritising the title over Champions League aspirations.

“It is so easy to sit in an office or a studio and talk about things like that,’ Klopp said in March 2019. “All the pundits come from Manchester United.” Carra is safe then.

Prick of the Week No. 31: Perez, official spokesb*stard for ESL

6) Florentino Perez attempting to get down with the yoof
What else could we expect from the ESL chairman than a particularly warped take on the reality of what football requires. At least he had the gumption to front up.

“We have to analyze why young people, 16-to-24-year-olds, 40% of them aren’t interested in football. Why? Because there are a lot of low-quality games, and they have other entertainment platforms. It’s a reality. They say the games are too long.”

Then Andrea Agnelli waded in :”The Super League simulates what young people do on digital platforms in competition with Call of Duty, FIFA or Fortnite.”

So this is where we are. Football being downgraded to some kind of video game theme park where attention span gets triggered by bandwidth lagging. Or whatever “the youth” call it.

7) Fourth spot becoming spuriously irrelevant
Well, wouldn’t you know. The battle for fourth was rendered a sideshow, a B-movie in the face of such seismic shenanigans. No beef with that as an editorial decision. The story was off the pitch so what happened on it was merely a skirmish that wouldn’t count anyway. Liverpool fan sites were already saying things like “that was a strange watch” on Monday night. As if it didn’t matter. But it does. It did. You knew it would matter. The game itself was great.

Luckily for the Reds, Chelsea were distracted the following night, but even Liverpool’s ex-midfielders still can’t score. I mean you, Adam Lallana.

8) The players speak out
Bluntly and in longform. The ESL shenanigans led to some flowery and terse reactions from that little pool of people called the players. From Kevin de Bruyne it was all a bit Hollywoood as he spoke of “this man out of a little town Belgium….I am still a little boy who loves to play football.” And in the red corner, it was James Milner and it’s live: ““I don’t like it and hopefully it doesn’t happen.” Talk about the romantic and the practical…

The UCL format right now works great and that is why it's the most popular club competition in the world – for us players and for the fans.

9) Jose Slips Out the Back Door
While the ESL fallout was still volcanic, the news that Jose Mourinho was “relieved of his duties” barely made a lightweight ripple in the back pages. Despite the timing of the statement just days before a cup final, an environment where Mourinho has a very good record, this was probably a good time to bury some unstable news for Daniel Levy.

The Tottenham chairman said that he “may have misjudged the mood of the nation” in respect of the ESL. My goodness. Meanwhile, Jose slipped away without fanfare. Daniel said Jose “would always be welcome here”. Just not on Sunday.

10) Everyone Calmed Down. A bit
So when are we allowed to talk about the actual football again? Is it relevant to get excited at all about what looks like a finger-licking good pair of Champions League semi-finals? Pep v Poch part 2 is coming. We need some trailers or something to get this show back on the road.

Best part of the week so far was to see Patrick Bamford go all Peter Crouch – smile, enjoy etc and be very amiably tall. Has Micah Richards calmed down yet enough to crack another smile in his ambassadorial role? It’s good to see Rio has moved on from the war references. Football is under threat but there’s no bloodshed.